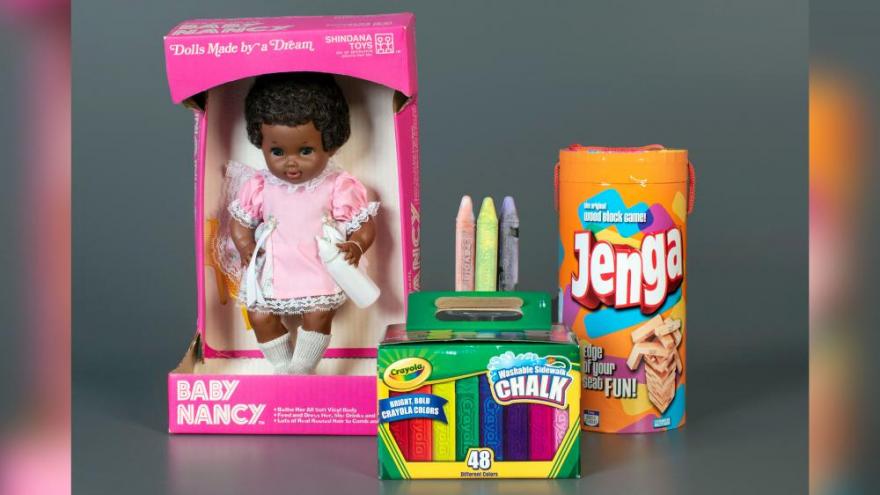 Sidewalk chalk, Jenga and Baby Nancy were the 2020 Hall of Fame inductees.

(CNN) -- These classic games cemented their legendary status this week.

Sidewalk chalk, Jenga, and a Black doll named Baby Nancy are the newest additions to the National Toy Hall of Fame.

The games were chosen from a list of 12 contenders, beating out other classics like bingo, My Little Pony and Tamagotchi, said the Hall of Fame in a news release.

Their induction into the Hall of Fame puts them in the same league as Barbie, dominoes and checkers.
But don't think the list is just for big names -- the Hall of Fame inducted the humble cardboard box in 2005.

The Strong National Museum of Play, in Rochester, New York, heads the Hall of Fame.

"It may seem frivolous, but this year has really been a fine example of how toys contribute to joy, laughter and imagination," Chris Bensch, the museum's chief curator, told CNN. "It's really integral to who we are, and how we develop."

All of the toys have very different histories, according to the news release. Released in 1968, Baby Nancy added a dose of diversity in a sea of white dolls. Jenga was inspired by its creator's time playing with wooden blocks as a child in Africa. Meanwhile, sidewalk chalk has been traced back to paleolithic cave art.

"In the wake of protests, demonstrations and a larger understanding of racial inequities, it was time to recognize the breakthrough that was Baby Nancy," Bensch said. "During the pandemic, sidewalk chalk really blossomed. And the sales of table top games and jigsaw puzzles went through the roof as more families stayed home."

Do toys get inducted every year?

The Hall of Fame has been coming out with a list of newly added toys each year since 1988. The museum says that toys are chosen "on the advice of historians, educators, and other individuals who exemplify learning, creativity, and discovery."

The list is a yearlong process involving a process that Bensch likened to the Academy Awards.
This year, the National Selection Advisory Committee received 3,000 nominations for almost 700 different toys -- which it narrowed down to a list of 12 finalists.

The three new toys will appear in an upcoming exhibit at the museum, joining 71 other toys in the Hall of Fame.

So if your favorite toy didn't make the cut this time, there's always next year.