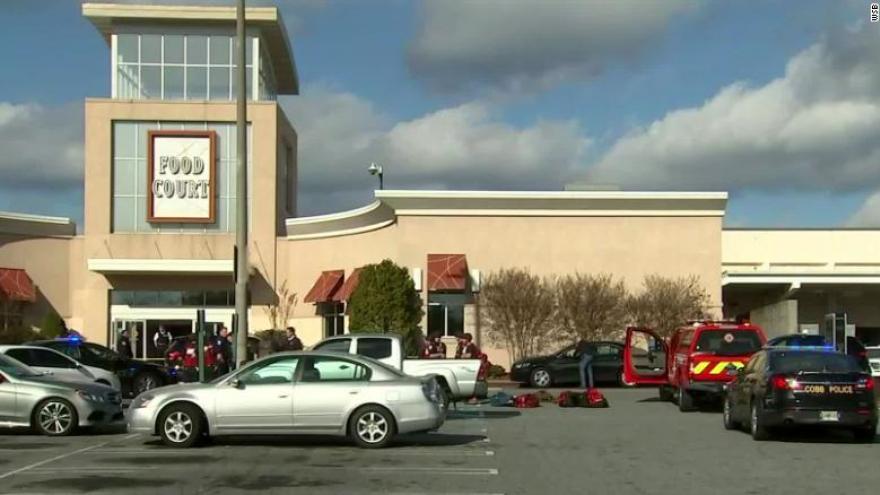 (CNN) -- Holiday shopping took a violent turn Saturday when shots were fired at Cumberland Mall in Atlanta following a dispute in the food court, police said.

Police responded to the incident at 1:18 p.m., according to a statement from the Cobb County Police Department. Police determined that it was an isolated incident, and those involved knew each other, the statement said.

A suspect was identified but fled the scene, and police told CNN they are working to locate him. The victim was taken to a hospital for treatment.

The mall was temporarily closed, but police said it is expected to reopen later in the day.

Adrian Matthews was in Bath and Body Works when the shots were fired. He told CNN affiliate WSB that it was "just pure pandemonium" inside.

"People started running, I mean they knocked over pretty much the entire store. Candles, glass — it was crazy," he said. "Everybody fled to the back of the closet in the break room of Bath and Body Works, and just piled up and tried to be as safe as they could."

Gunshots can be heard in a video posted to Twitter in what appears to be the food court. People can be seen running and ducking down behind chairs and tables.

"Bruh someone was really shooting inside Cumberland Mall," wrote user JamariJonesATL. "I can't believe this. I come here all the time. I see it so much on TV but never in Atlanta."