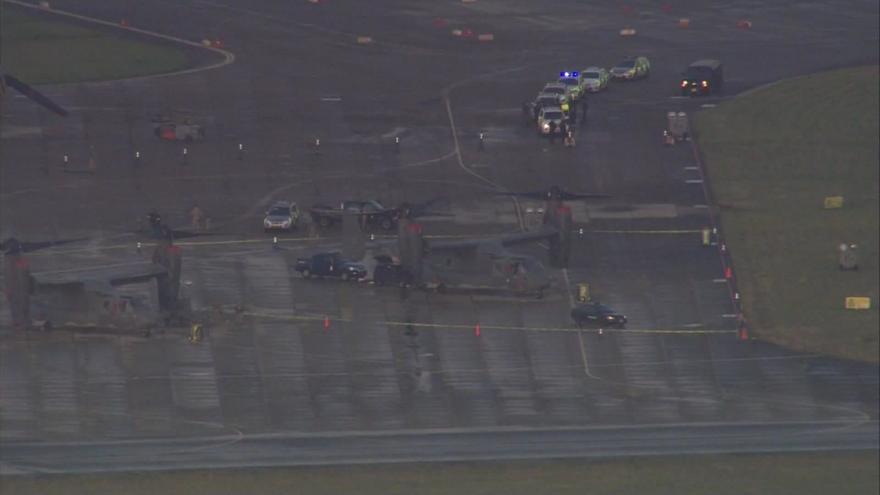 LONDON (AP) — A British military air base in England used by the U.S. Air Force was locked down Monday after a disturbance, but the emergency measure ended when a man was arrested on suspicion of "criminal trespass," police and Air Force officials said.

American service members fired shots during the incident at the Royal Air Force base in Suffolk, according to county police. No one was injured other than the suspect, a 44-year-old British man who suffered cuts and bruises, police said. Police said the incident was not treated as terrorism.

The nature of the disturbance was unclear, although British media reported that a car tried to ram the perimeter gates at RAF Mildenhall. Police and officials at the air base declined to comment on the reports.

Suffolk Police said they were not looking for any other suspects at the site.

"There is no wider threat to the public or occupants on the base and no other people have been injured as a result of the incident," they said.

The base located about 80 miles (130 kilometers) north of London is home to some 3,000 military personnel and their families. The U.S., which has long made extensive use of air bases in Britain, has air-refueling assets stationed there.

The Pentagon initially urged all individuals near RAF Mildenhall to avoid it, but the lockdown was lifted about an hour after the potential threat was reported. Suffolk police said nearby schools and businesses had resumed normal activities because there was no danger to the community.

The Mildenhall base was scouted out in 2015 by an Islamic extremist who eventually received a life sentence for plotting an attack against U.S. military personnel.

Junead Khan was tried for using his job as a delivery driver to study RAF Mildenhall and another Royal Air Force base.

A jury convicted Khan last year of planning to travel to Syria as a supporter of the Islamic State extremist group and preparing possible attacks at Mildenhall and RAF Lakenheath, which is also used by U.S. personnel.

The Mildenhall base is home to the U.S. Air Force's 100th Air Refueling Wing, which is responsible for American refueling operations across Europe.

Other units, including the 501st Combat Support Wing, the 352nd Special Operations Wing and the 95th Reconnaissance Squadron are also stationed there.

Britain's official terrorist threat level has been set as "severe" indicating that intelligence agencies believe an attack is highly likely.