Shootings across US amid continued summer surge in gun violence 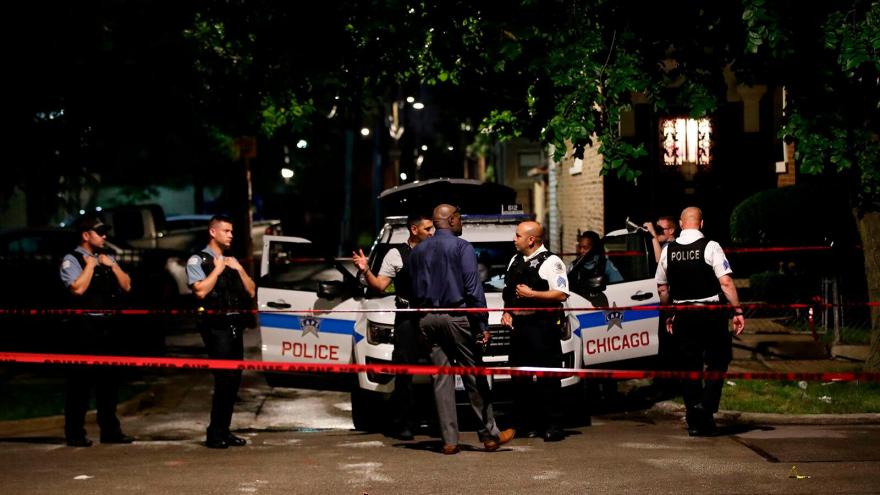 Chicago and New York City saw heightened levels of gun violence this weekend, continuing a trend of increased violence over the past few months.

(CNN) -- Chicago and New York are among a number of cities that saw heightened levels of gun violence this weekend, continuing a trend of increased violence over the past few months.

Among those injured are a 12-year-old boy, a 14-year-old boy and two 16-year-old boys in separate shooting incidents. One of the three people killed was an 18-year-old man.

Police said the 12-year-old boy was standing in a park with a group when he was shot in the leg around 8 p.m. (9 p.m. ET) Friday and transported to the hospital in fair condition. Police are still looking for the suspect.

A 14-year-old boy was shot in the arm late Saturday and the 18-year-old man killed on the 3500 block of W. Flournoy, police said. The 14-year-old told police he heard shots fired and felt pain and was transported to the hospital in fair condition. Police do not have details on any suspects.

A 16-year-old boy was shot in the leg Saturday after police say a group of people pulled up in a vehicle and fired shots at him. He was transported to the hospital in stable condition.

In New York, over 40 people were shot in a 48-hour period as of Sunday morning, the New York Police Department said.

Increase in shootings across US

Chicago, New York and other American cities have seen sharp increases in gun violence since late spring. From May to June 2020, homicides in 20 major US cities increased by 37%, led by Chicago, Philadelphia and Milwaukee, according to new data from the nonpartisan Council on Criminal Justice think tank.

The increases coincide with the end of pandemic-related shutdowns, mass unemployment due to the pandemic, protests condemning police violence against Black people, and the summer, when crime annually increases.

Still, the incidents of gun violence are generally on par with crime statistics from earlier this decade and are well below the stunning highs of the 1990s.

Overall, though, total crime complaints in New York are down 3% from last year, led by sharp decreases in rape and grand larceny, NYPD data shows.

Other cities with violence

In Philadelphia, five people were shot Saturday night after police responded to a report of a person with a gun and discovered a gathering of about 200 people.

As police units arrived, several males began shooting at them, a news release from Philadelphia Police said. No police were injured and officers did not discharge their weapons. All five victims are in stable condition at local hospitals.

In New Haven, Connecticut, six people were shot, including one fatally, late Saturday night, according to police.

Four people were shot and wounded in Detroit in separate incidents Saturday night and early Sunday, Detroit Police said. One of the victims is in critical condition and another is in serious condition.

A fifth person was killed when a man intentionally rammed a car, police said, hitting a 58-year-old woman who was standing behind it. She died at a hospital.

Also in the Detroit area, Michigan State Police said they are investigating a possible freeway shooting that happened early Sunday. Two victims from that incident drove to a hospital and are being treated for non-life-threatening injuries, the state police said.

In Rochester, New York, five people were injured in a shooting Saturday night, according to Rochester Police.

Officers responded around 11:30 p.m. Saturday and found a vehicle that "had been struck by gunfire," according to a statement from Rochester Police.

Four men, between 20 and 30 years old, and one 32-year-old female were transported to the hospital with non-life-threatening gunshot injuries, police said.

In South Bend, Indiana, a 9-year-old boy was shot and killed after a weapon discharged while juveniles were playing, according to a statement from the St Joseph's County prosecutor's office. Initial indications were that no adults were associated with the shooting, spokeswoman Jessica McBrier said.

"This amount of gun violence and the damage this has inflicted on our neighborhoods is unacceptable," Cincinnati Police Chief Eliot K. Isaac said in a news release Sunday.

Cincinnati Mayor John Cranley decried the surge in violence and shootings in the city.

"The very sad reality is people are getting in trouble when they have nowhere to go and nothing to do," he said.