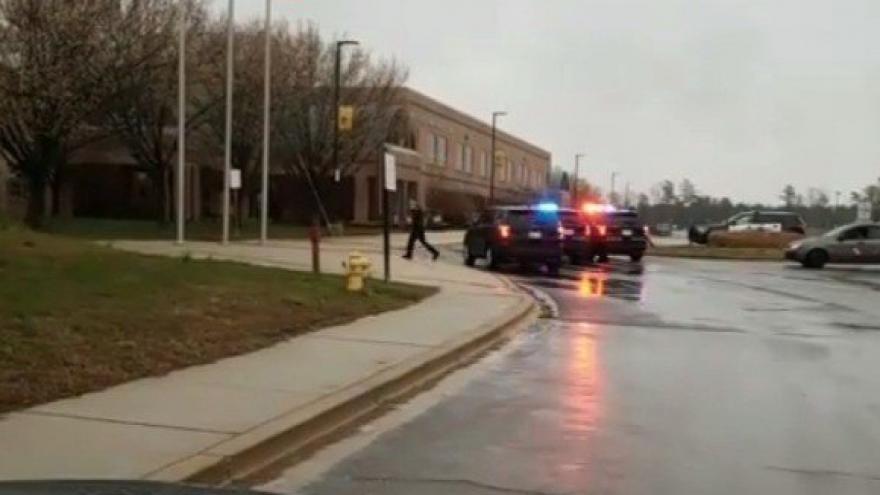 GREAT MILLS, Md. (AP) — A teenager with a handgun shot a girl inside his Maryland high school Tuesday before he was fatally wounded during a confrontation with a school resource officer, a sheriff said.

The officer and the student both fired a single shot at that point, and it wasn't immediately clear whether he took his own life or was killed by the officer's bullet, St. Mary's County Sheriff Tim Cameron said.

The 16-year-old girl was hospitalized in a life-threatening condition with critical injuries, the sheriff said. A 14-year-old boy also suffered a gunshot wound — it wasn't clear who shot him — and was in stable condition. The officer, who doubles as a SWAT team member, was unharmed.

Politicians responded swiftly, acknowledging that this shooting increases the pressure for action against gun violence as anger swells nationwide over the Valentine's Day killings of 17 people at a Florida high school by a teenager with an assault weapon.

The sheriff also praised the officer, Deputy Blaine Gaskill, a six-year veteran in his first year at the high school, for containing the situation in less than a minute.

"He had to cover significant ground," Cameron said. "The premise is simple: You go to the sound of gunfire."

The shooter was identified as Austin Rollins, 17. His motive wasn't immediately clear. "There is an indication that a prior relationship existed between the shooter and the female victim," the sheriff said.

Cameron said Gaskill was stationed inside the school, pursued the shooter and fired a single round. He said it wasn't immediately clear whether that bullet hit Rollins, or the boy who was injured.

"Simultaneously the shooter fired a round as well. So, in the hours to come, in the days to come, through a detailed investigation, we will be able to determine if our SRO's round struck the shooter."

Agents with the FBI and the Bureau of Alcohol, Tobacco, Firearms and Explosives joined deputies at Great Mills High School as students endured a lengthy lockdown, cowering inside classrooms and a locker room while officers worked to make sure there were no more threats on campus.

"They came in with guns, and they probably thought there might be another shooter, of course," she said. "About an hour or two later they came -- more police came -- and told us they would search us and search our bags and stuff." Eventually, the students were escorted outside.

The school has about 1,600 students and is near the Patuxent River Naval Air Station, about 65 miles (104 kilometers) southeast of Washington. On Tuesday, ambulances, fire trucks and other emergency vehicles crowded the parking lot and the street outside, where about 20 school buses lined up in the rain to take students to nearby Leonardtown High School to be picked up by their parent or guardians.

Democratic Rep. Steny Hoyer praised the first responders, saying the officer at the school "answered the call this morning with swiftness, professionalism, and courage." He said it's now for Congress to take action.

"We sympathize. We empathize. We have moments of silence. But we don't have action," Hoyer said. "Wringing our hands is not enough."
Sen. Ben Cardin, D-Md., also spoke to reporters near the high school, and expressing anger and saying that at a minimum, universal background checks and a ban on assault-style weapons are needed. He said he believes momentum is building for reform, fueled by student activism.

"These students are literally just not taking 'no' for an answer," Cardin said. "I can tell you that Americans are listening to our students. I think our political system will respond."

Maryland's Senate joined the House on Monday night to ban bump stocks, which enable a semi-automatic rifle to mimic a fully automatic weapon. Teachers' union leaders issued statements Tuesday saying more policies must be changed nationwide to keep schools safe.
Republican Gov. Larry Hogan, meanwhile, accused the Democrat-led legislature of failing to take action on "one of the most aggressive school safety plans in the country."

"We've got to take action," Hogan said. "We're going to try to get something done in Annapolis."

Many students across the country are calling for effective gun controls, leading up to Saturday's March For Our Lives rally in the nation's capital against gun violence in schools. The violence hasn't abated since the massacre in Parkland, Florida; A high school student in Birmingham, Alabama, was killed this month when a classmate fired a gun inside a classroom. Threats against schools have proliferated as well, and Great Mills High has not been immune.

Just last month, the school's principal, Jake Heibel, told parents in a letter posted on the local news site The Bay Net that two students were interviewed after they were overheard mentioning a school shooting, and they were found to pose no threat. Heibel said the school increased its security nevertheless after social media posts about a possible school shooting "circulated quite extensively."
Also last month, St. Mary's County Sheriff's office said it arrested two teenage boys for "Threats of Mass Violence" and a 39-year-old man on related charges after the teens made threats about a potential school shooting at Leonardtown High School, a high school about 10 miles from Great Mills. Police said they obtained a search warrant that led to them finding semi-automatic rifles, handguns and other weapons, along with ammunition.

GREAT MILLS, Md. (CBSNews) -- A shooting at a Maryland high school caused injuries Tuesday morning, and the campus was on lockdown as deputies and federal agents converged on the crime scene. At least three people were injured in the incident, CBS News has learned.

The St. Mary's County Public Schools said the situation was "contained" after the shooting at Great Mills High School, which has about 1,600 students and is near the Patuxent River Naval Air Station, about 65 miles southeast of Washington.

Student Mollie Davis told CBS News over Twitter that she heard what sounded like a loud balloon pop.

"I was in my classroom and heard everyone screaming," Mollie said. "I've never heard people sound so scared."

Police officers told students that the threat was over and the school would be evacuated soon, the student said.

The Baltimore Sun reported that a student said the shooting happened around 8 a.m. Terrence Rhames, 18, told the Sun that he heard a gunshot and saw a girl fall as he ran for an exit. "I just thank god I'm safe," Rhames said. "I just want to know who did it and who got injured."

The county sheriff said deputies were on the scene and told parents or guardians to stay away, urging them to go instead to Leonardtown High School to reunite with Great Mills students there. The Bureau of Alcohol, Tobacco, Firearms and Explosives tweeted that its agents are going to the scene. FBI agents were also responding to the school.

Maryland Gov. Larry Hogan and Rep. Steny Hoyer tweeted that they're monitoring reports and urged people to follow the instructions of local law enforcement at the scene.

ST. MARY'S COUNTY, Maryland (CBSNews/WUSA) -- A shooting happened at a high school in southern Maryland on Tuesday morning, according to the local school district. Great Mills High School in St. Mary's County was placed on lockdown and the situation was contained, the school district said.

"I was in my classroom and heard everyone screaming," student Mollie Davis told CBS News over Twitter. "I've never heard people sound so scared."

She said that she heard what sounded like a loud balloon pop. Police officers later told students that the threat was over and the school would be evacuated soon, Mollie said.

MedStar St. Mary's Hospital has confirmed that they are treating patients from the school shooting, according to a hospital spokesperson. They would not say how many people are injured and the extent of injuries.

ST. MARY'S COUNTY, Maryland (CBSNews) -- A shooting happened at a high school in southern Maryland on Tuesday morning, according to the local school district. Great Mills High School in St. Mary's County was placed on lockdown because of the shooting, the school district said in a statement to CBS Baltimore.

Sheriff's deputies were on the scene.

Agents from the FBI and the federal Bureau of Alcohol, Tobacco, Firearms and Explosives were responding to the scene.

ST. MARY'S COUNTY, Maryland (WUSA) -- An investigation is underway after a shooting at a high school in St. Mary's County, according Maryland State police.

Maryland State Police are helping St. Mary's County Sheriff's office in the investigation at Great Mills High School. The school district says the incident has been contained and the school is on lockdown.

St. Mary's County Sheriff's Office are asking parents to stay away from Great Mills High School. They should report to Leonardtown High School. Students will be taken there.

There has been a Shooting at Great Mills High School. The school is on lock down the event is contained, the Sheriff's office is on the scene additional information to follow.
Parents/Guardians should go to Leonardtown HS for reunification with GMHS students