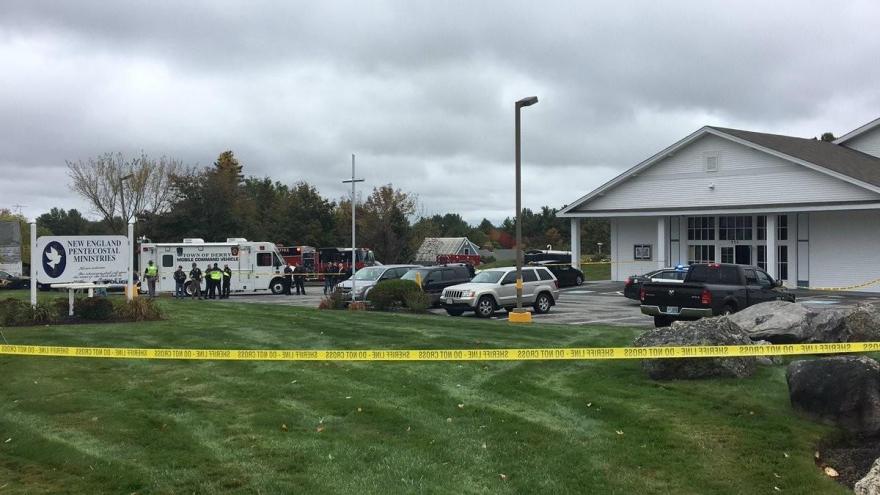 **Embargo: Boston, MA** A suspect is in custody after a Saturday shooting at a New Hampshire church left at least one person wounded, Pelham Police Chief Joseph Roark said.

(CNN) -- Two people were wounded by gunfire Saturday morning during a wedding in a small-town New Hampshire church, authorities said.

The state attorney general's office said a 911 caller reported a man walked into New England Pentecostal Ministries in Pelham "and shot at the presiding bishop."

"From my understanding," he said, "they basically gang-tackled him."

Dale Holloway, 37, was charged with first-degree assault, the state attorney general's office said in a news release. He is scheduled to be arraigned Tuesday.

Holloway was accused of shooting Stanley Choate, the 75-year-old church bishop, in the chest, the news release said. Choate was taken to Tufts Medical Center in Boston and is listed in serious condition, the release said.

Claire McMullen, 60, was shot in the arm and was listed in good condition at a local hospital, the news release said.

Mark Castiglione, 60, was struck in the head with an object and was treated and released from a local hospital, the release said.

Benjamin Agati, a senior assistant attorney general, said it is his understanding that Castiglione's son is Brandon Castiglione, who is accused of second-degree murder in connection with the killing of pastor Luis Garcia earlier this month. Garcia worked at the church where Saturday's shooting took place.

When asked if the shooting was related to the killing of Garcia, Agati said "We are certainly looking into that right now, yes...Whether there is in fact a clear connection between these two events that is something we're trying to put together."

Agati said Mark Castiglione was the groom at Saturday's ceremony.

The suspect's relationship to the wedding guests is uncertain, Roark said earlier.

Other wedding guests were treated for minor injuries and nobody was killed, Roark said. A handgun was recovered.

The Pelham Police Department provided active shooter training to members of the church within the past year, Roark said.

Former minister was shot and killed

A memorial service scheduled to be held after the wedding was for Garcia, 60, a pastor at the church for six years who was shot and killed October 1, according to CNN affiliate WMUR.

He was shot inside a home in Londonderry, authorities said. An autopsy found he was killed by a bullet to the neck.

"We just came and we found all this police, all this chaos here, and they tell us that the activity will be canceled," memorial service attendee Geraldo Pagan told reporters outside the church.

The service was canceled because of Saturday's shooting.

Pelham is a town of about 12,000 people 40 miles north of Boston. It is located between two larger cities, Nashua to the west and Salem to the east, and also borders Massachusetts to the south.

Pelham began primarily as a farming community until World War ll, when growth in population and industry took hold.