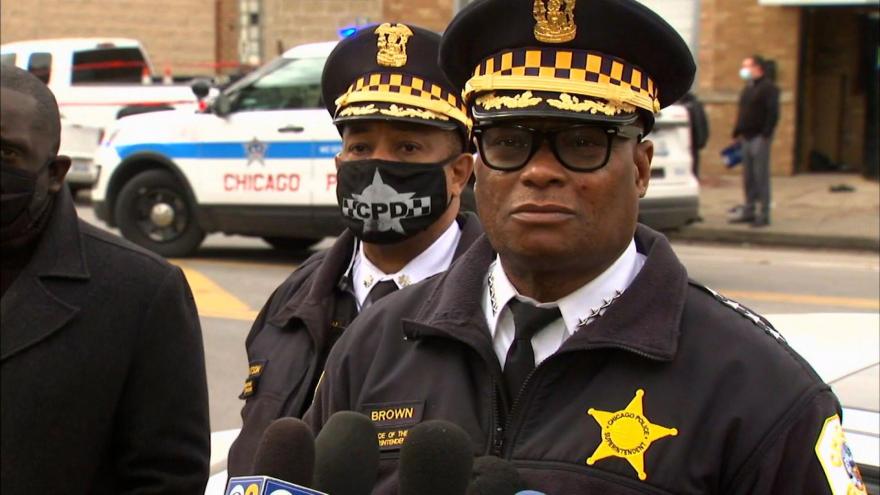 Chicago Police superintendent David Brown spoke on Sunday after 15 people were shot at a pop-up party.

(CNN) -- Two people were killed and 13 others were wounded in a mass shooting at a party on Chicago's South Side early Sunday morning, police said.

Several of those injured in the shooting are still in surgery, said Police Superintendent David Brown. He said four guns were seized at the building, a makeshift setup converted for a pop-up party. The victims ranged in age from 20 to 44, police said.

Brown said it's early in the investigation and that there isn't a known motive at this time. There are no suspects in custody, he said.

An image posted by Chicago Fire Department shows a group of balloons and a stray shoe on the sidewalk outside the scene.

Officials told CNN affiliate WLS they found a chaotic scene as they responded.

"They were running, they were screaming, they were everywhere," said Greg Stinnett, Chicago Fire Department assistant deputy chief paramedic.

Chicago, like many large US cities, has seen a sharp rise in gun violence and shooting incidents since the end of last spring's Covid-19 related shutdowns. As of December 27, some of America's largest cities saw dramatic increases in homicides, including Chicago (55%), New York (41%) and Los Angeles (30%), according to police data.

Compared to this point last year, murders in Chicago have increased 15% and shooting incidents are up 31% in 2021, according to the latest Chicago Police data. At the same time, total crime complaints have actually declined, led by sharp drops in burglary, theft, and aggravated battery, according to police data.

Criminology experts have ascribed the rise in violence largely to pandemic-related fallout: closed schools and businesses, higher unemployment and stress and anxiety, particularly in lower-income homes. Illness and social distancing also led to fewer officers on the streets in areas that needed crime prevention the most.