Death toll rises to 17 after duck boat capsizes in Missouri, victims ranged from 1-to 70-years-old 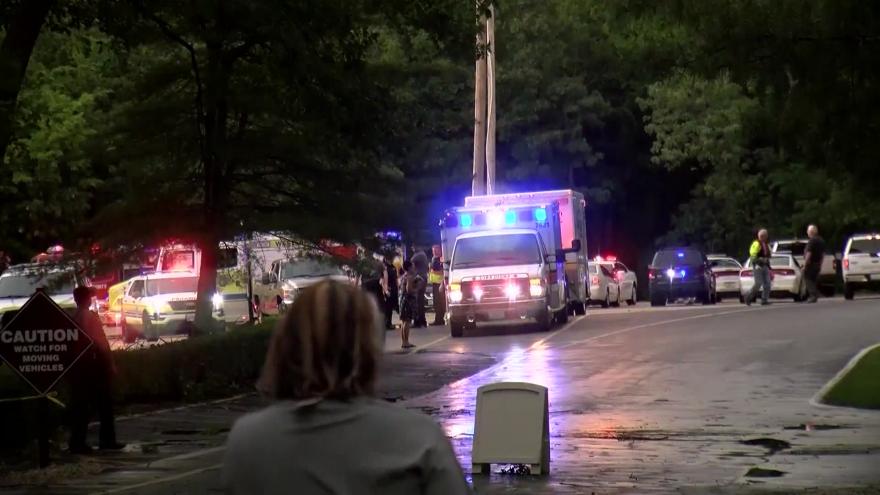 BRANSON, Mo. (AP) — The Latest on a deadly tourist boat accident in Missouri (all times local):

Authorities say it could take several days to raise a duck boat that sank in southern Missouri, killing its driver and 16 passengers.

Missouri State Highway Patrol Sgt. Jason Pace says the vessel came to rest in 80 feet of water in the Lake of the Ozarks. Authorities initially said it would be raised Friday but Pace says it will take several days to get the equipment in place. He says investigators "want to preserve evidence as best is possible."

Pace says the area has been secured and the investigation turned over to the National Transportation Safety Board and the Coast Guard.

Pace says divers indicated that the water visibility was better than normal, expediting the recovery of the victims' bodies. They ranged in age from 1- to 70-years-old.

A man who witnessed a deadly Missouri duck boat accident while aboard a nearby riverboat says the storm that swamped the smaller vessel appeared suddenly.

Brayden Malaske, of Harrah, Oklahoma, says no one was worried about the weather when he boarded the Showboat Branson Belle with family shortly before the storm hit Thursday night. He says Table Rock Lake seemed calm but that it "suddenly got very dark."

He says he didn't think the duck boats would have a problem despite the weather because they are repurposed military vehicles. He says that when the duck boat capsized, people aboard the riverboat tried to guide the passengers to safety. He says he saw a woman holding on for "dear life" to one of the riverboat's paddles before being rescued.

Meteorologist Kelsey Angle says a severe thunderstorm watch was issued for the area around 11:30 a.m. Thursday. The watch indicated that conditions were favorable for the formation of severe thunderstorms with winds reaching 70 mph.

The Weather Service then issued a severe thunderstorm warning at 6:32 p.m. for the three southwest Missouri counties that include Branson and Table Rock Lake. It followed up with a statement at 7:02 p.m. that 70 mile-per-hour winds were possible.

The first 911 calls about the boat capsizing were reported seven minutes later.

Wind gusts in the Branson area reached 50 to 60 mph.

The mayor of a southwest Missouri city that was the scene of a deadly duck boat accident says she was with the wife of the vessel's driver when she was notified that he had died.

Branson Mayor Karen Best says Bob Williams was driving the Ride the Ducks boat that sunk Thursday night in Table Rock Lake, killing 17 people. She says Williams, also known as Capt. Bob, was a "great ambassador for Branson" and "was at every event."

She says Williams' wife learned of her husband's death at City Hall where victims' families had gathered.

Mourners have been leaving flowers on cars in the parking lot of the duck boat's business.

The mayor says residents of and visitors to the southwest Missouri city where a duck boat capsized, killing 17 people, have been donating food, drinks and flowers.

Branson Mayor Karen Best says it's been a "difficult time" since the Ride the Ducks boat sank Thursday night in Table Rock Lake on the outskirts of Branson, but that it's given the tourist community a "chance to step up to help those in pain."

City Hall has become a command center where victims' families and friends can meet with counselors and clergy as well as people who can answer their questions. Red Cross officials are also there to help.

Best says Branson, known as an entertainment center, is usually a city "full of smiles," but that "today we are grieving and crying."

Investigators with the Coast Guard and National Transportation Safety Board are investigating a duck boat accident that killed 17 people in southern Missouri.

Authorities are releasing few details, including whether the people aboard were wearing life jackets. The NTSB and Stone County Sheriff Doug Rader are urging anyone with video or photos of what happened to provide them to authorities.

Authorities say the final four people missing since a boat capsized on a lake in southern Missouri have been found, raising the death toll to 17.

The office manager at the Stone County Sheriff's office, Wendy Doucey, confirmed the discovery Friday. The Ride the Ducks boat sank Thursday night in the Lake of the Ozarks near Branson.

The victims' names haven't been released.

Authorities are working to recover a duck boat that capsized and sank in a southern Missouri lake, killing more than a dozen people.

Stone County Sheriff Doug Rader said during a news conference Friday that he believes the boat sank in 40 feet (12 meters) of water and rolled into 80 feet (25 meters) of water. He says the Missouri State Highway Patrol divers have located the vessel, which is on its wheels in Table Rock Lake in the Branson area. Authorities plan to recover the boat later Friday.

He says the first call about the capsized boat came in at 7:09 p.m. Thursday. He says authorities are working to determine what happened and had no information about whether passengers were wearing life jackets or whether they were just stowed onboard.

The victims' names haven't been released.

Authorities say the four people still missing after a duck boat capsized in southern Missouri are presumed dead, in addition to the 13 people whose bodies have been recovered.

Stone County Sheriff Doug Rader described the search as a "recovery mode for the bodies that are still missing" during a news conference Friday morning.

Rader says the driver of the Ride the Ducks boat died but that the captain survived when the boat sank Thursday night in Table Rock Lock in the Branson area. Thirteen victims already have been found.

Rader says an off-duty deputy aboard the nearby Showboat Branson Belle and others on the riverboat jumped in to help the duck boat's passengers. He described the rescue effort as "outstanding."

The National Weather Service is warning of a fresh round of thunderstorms, as divers search for four people missing after a duck boat capsized on a lake in southwest Missouri.

Meteorologist Jason Schaumann says some of the storms are expected to churn up large hail and damaging straight line winds when they hit Friday afternoon in the Branson area where the Ride the Ducks boat sank. The bodies of 13 victims already have been found.

Schaumann says wind gusts of 50 to 65 mph (80 to 105 kph) were recorded around the time the boat capsized Thursday night in Table Rock Lake after a severe thunderstorm warning had been issued. He says the weather was calm in the search area overnight and that the area narrowly avoided more storms Friday morning.

President Donald Trump is extending his "deepest sympathies" to those affected by a Missouri boat accident that has killed at least 13.

In a Friday morning tweet, the president sends his: "deepest sympathies to the families and friends of those involved in the terrible boat accident which just took place in Missouri."

He adds: "Such a tragedy, such a great loss. May God be with you all!"

Local officials said 14 people survived the sinking of a duck boat and four others remain missing after the accident Thursday evening on Table Rock Lake in Branson, Missouri.

A witness has described the wind-borne chaos as a duck boat capsized and sank in a lake in southwest Missouri.

Allison Lester told ABC's "Good Morning America" Friday that the "waters were rough" and "debris was flying everywhere" Thursday evening when the Ride the Ducks boat sank in Table Rock Lake in Branson. Lester was on a nearby boat.

Thirteen people were killed and four others are missing.

Lester's boyfriend, Trent Behr, says he saw a woman lying in the water and that they pulled her up onto the boat. He says she was unconscious and that he was getting ready to start CPR when emergency responders arrived.

Missouri State Highway Patrol Sgt. Jason Pace says four others remain missing Friday after the accident on Table Rock Lake in Branson Thursday evening. He says 14 others survived, but that seven were injured.

Pace says those who died ranged in age from 1 to 70-years old.

Branson is about 200 miles (320 kilometers) southeast of Kansas City and is a popular vacation spot for families and other tourists looking for entertainment ranging from theme parks to live music.

There were more than 20 people on the boat when it capsized, Nielsen said. Earlier, he said more than 10 people were injured. "We did have a severe thunderstorm, not sure if that is the contributing factor," he said. "There is a lot of storm debris."

A spokeswoman for Ripley Entertainment, the parent company of Ride the Ducks Branson, said the company is in contact with their employees at the scene, said.

Suzanne Smagala-Potts said the company recently acquired the vessel that was involved in the incident.

There were other boats on the lake that returned to dock safely.Divers representing various agencies are on scene to assist with the investigation and recovery.