Shelling and mortar fire are an all-day event near the Ukrainian front line. But the residents won't leave 'our motherland' 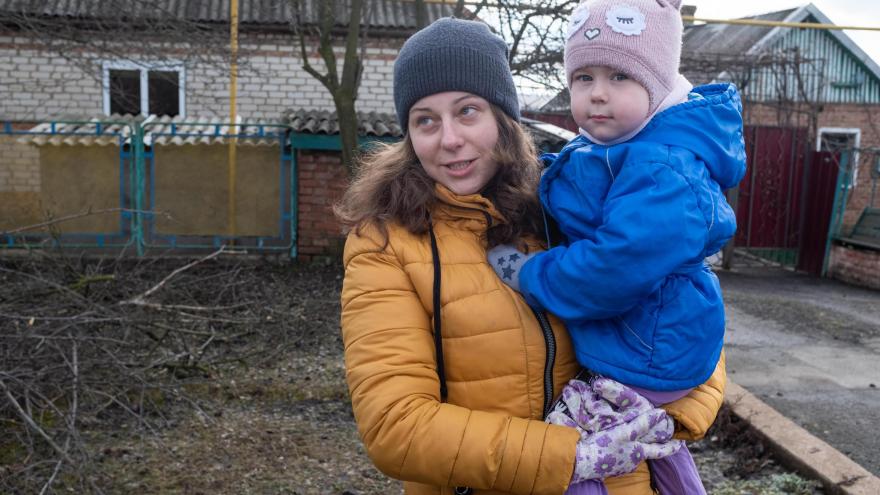 (CNN) -- Slovyanskaya Street is being taken apart by war. Not always in the hot drama of shellfire from nearby rebels, but in cold deconstruction. The community is being sold for scrap.

This close to the front, where the detonation of shells and outgoing mortars have now become an all-day event, most homes bear shrapnel scars.

But the deeper effects of this war are visible in the ruins of homes sold not for the plots of dangerous land that they sit on, but for the bricks and tiles that once constituted a home.

A house sells for just 2,000 hryvnia, or around $70. That's because Slovyanskaya Street in New York, Ukraine -- yes, that's the name -- is a few hundred meters from the line of control, and an easy target for a mortar bomb.

The checkpoint is just down the road. It marks the end of civilian life. Beyond it, Ukrainian government troops face off against Russian-backed rebels occupying the city of Horlivka, a little over a mile away.

After eight years of war, and on-off ceasefire, tensions are rising here again.

Along the entire border, there were 1,566 violations of the 2015 ceasefire on Friday, according to the Special Monitoring Mission of the OSCE, or Organization for Security and Co-operation in Europe. That's about four times above the past week's average.

Many analysts, especially in the US, believe this may be a prelude to a bigger invasion that could involve 190,000 Russian troops, including rebels in eastern Ukraine -- like those firing mortars from near Horlivka. President Joe Biden says that he now believes that Russian President Vladimir Putin has decided to invade.

During CNN's visit this weekend, we heard at least eight explosions in just an hour. The people who live here treat the threat of invasion with a mix of anxiety and apathy.

We spot Liudmila Ponomarenko as she takes her daughter, Lilia, out for a walk.

Lilia's playground, across the road, sits amid the rubble of a house. It's a sunny day, but Liudmila tells Lilia that the cracks and thuds in the distance are just thunder.

"She doesn't understand," says Liudmila. "But very soon she will understand, because she's three. So now we're thinking about whether we stay here."

Lilia's father is familiar with the tragedies of war. He's an emergency responder in a neighboring town. It's hard for him to fathom the future that his daughter is being brought into.

"There's no stability in the country," says Andrey Ponomarenko. "I'm doing my best to provide all that's needed. But still, I can't change reality."

No one is a stranger to the risk. The house belonging to Sergey Pedyk, an electrician, is scarred from a bomb that landed in his yard years ago.

He has a hard time believing that a hotter war will come.

"Comrades, if they wanted to invade, they would invade," he says. "But they don't invade. Why don't they invade? Because they have good sense."

His yard is strewn with the metalworks he's using to repair an old tractor. A vegetable garden supplements his income, and a dozen or so chickens lay eggs throughout the winter so long as they're properly fed.

Whether the war gets worse or not, he and his wife will stay.

"We won't leave our motherland," he says. "Motherland is motherland."

Even without a full-scale Russian invasion, the residents of Slovyanskaya Street live in primitive conditions. Municipal water flows for just two hours a day, every morning. So if Valentina, who preferred to only use her first name, and her 36-year-old son Maxim want water in the afternoon, they must walk to a common well to fill up a plastic bucket.

Maxim is fatalistic. The shelling might come for you one day, he says, "and you are left with nothing."

"Who cares about you? No one."

Valentina, motioning to the razed houses that her former neighbors left behind, knows that life on Slovyanskaya Street cannot go on forever.

"We've gotten use to it, to the shelling. We used to hide in the basement. Now we don't. We just sit and wait. Whatever happens, happens."