She sings. He interrupts. Together they've become a TikTok sensation 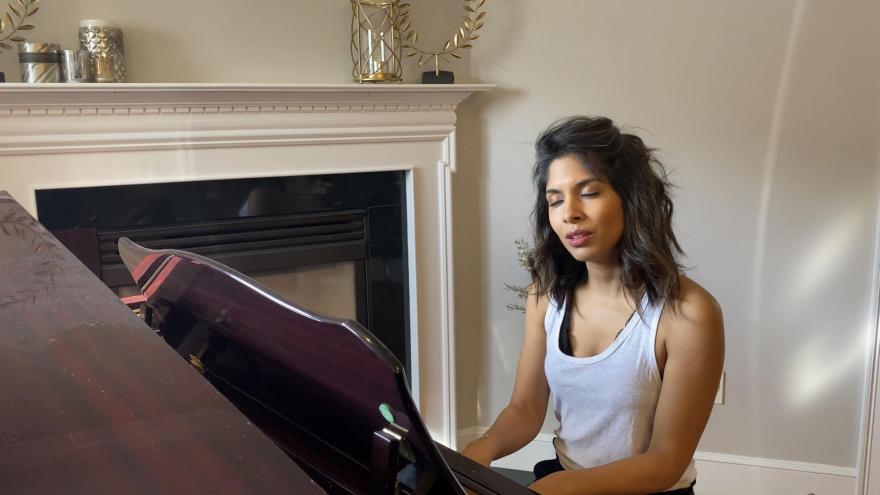 Meet singer Sheena Melwani, who along with her "real Indian dad" has become a TikTok sensation. They're the pair behind the "Interrupted" series, in which Melwani sings covers of popular songs and he interjects with witty commentary.

(CNN) -- She sits in her Boston living room, playing "If the World Was Ending" by JP Saxe on her piano. Caught in the moment, she closes her eyes as her voice reaches a crescendo.

"But if the world was ending you'd come over, right," she croons. "You'd come over and you'd stay the night."

Meet singer Sheena Melwani, who along with her "real Indian dad" has become a TikTok sensation. They're the pair behind the "Interrupted" series, in which Melwani sings covers of popular songs and he interjects with witty commentary.

Their short videos have charmed fans who need a lift during a difficult year plagued by political tensions and a deadly pandemic. They've also drawn the attention of singers such as John Legend, who's commented on how great Melwani sounds.

Between her singing, the playful needling and her unbridled laughter in response, each clip offers a few moments of joy during what has been a dark time.

"I think one of the most important things that has come out of all of this is much larger than just videos of a girl singing and being hilariously interrupted," Melwani told CNN.

"The joy that these videos have brought people is the true gift. You can see many comments from people all over the world saying how much they enjoy them and how much their families are bonding over the laughter and music."

Fans come for the music but stay for the laughter

Melwani describes herself as a media artist and an aspiring singer. She shares the videos on YouTube, Facebook, TikTok and Instagram, where they can draw hundreds of thousands of views. They're especially popular on TikTok, where she has 1.7 million followers.

Here, her unconventional content fits right in. It's not lip-synching or dancing. It doesn't involve eye-popping magic tricks or fluffy puppies. Most people come for the music, but stay for the chuckles.

Their "Interrupted" series features some of the biggest pop songs of recent years.

Melwani's cover of Bruno Mars' "Grenade" is a fan favorite. With lyrics such as "I'd catch a grenade for ya, throw my hand on a blade for ya, I'd jump in front of a train for ya," -- the song is mercilessly trolled by the "real Indian dad."

"What are you saying? Ya. Complete nonsense," he says as she sings about how she'd intercept deadly weapons for love. "Playing piano with bleeding hands? These are not good examples of love. Cannot love a bleeding, train-person, stuck on the front."

It started as a way to connect during the pandemic

Like everyone else, Melwani was looking for a way to stay connected with loved ones during the pandemic. So she turned to music -- her lifelong passion.

"I started doing live concerts on my Facebook page, where I'd take requests, almost like a human jukebox, three times a week," she says. "Then I decided to record a song after one of my online sessions to post on Instagram."

The song was Saxe's "If the World Was Ending."

"As I started the song, the heckling started. I decided to keep singing, fully expecting to delete the video. But after seeing how we both were laughing so hard, I decided to post it on my TikTok page."

That was in May, the same month she joined TikTok. At the time she had eight followers -- mostly family members.

"The video started getting views from more than just my family and friends, and literally overnight my account started growing," she says. "Given the fun we were having and the amount of joy we were spreading, I decided to make the 'Interrupted' videos a staple of my online posts."

Her fan base has skyrocketed. That original post has racked up more than 2.9 million views and attracted fans from around the world. Melwani has since done covers of songs by Ed Sheeran, Alicia Keys and many other stars.

In a kind of a full-circle moment, Saxe returned the favor. Last month, he posted a video of himself singing his song. But this time, he substituted his lyrics with the words from Melwani's "Interrupted" series.

The mystery voice is not who you may think

Melwani's one simple rule for picking the songs she sings is they can't be offensive.

"When I hear music on the radio, if I hear a quirky lyric, I take note. We also get so many great suggestions from my followers via direct messages on Instagram," she says.

She begins each song earnestly. Then, once the wisecracks start, her face broadens into a smile. Sometime she leans back and bursts into laughter. Other times, she tries to keep a straight face and maintain her composure. It doesn't always work.

Melwani says her interrupter does not hear the songs in advance because she doesn't want to ruin the organic, spontaneous effect of the whole thing.

"All the comments you hear are off the cuff," she says. "I never know what is coming so my reactions are 100% authentic. I think this is one of the reasons this is all so enjoyable."

On Melwani's social media accounts, commenters debate his identity. On his social media feeds, he appears with a big, cartoonish bobblehead superimposed on his own. He guards his privacy and declined to reveal himself for this story.

"The fun is that the mysterious voice remains a mystery on my social media pages. So many people are enjoying the banter that it would be a shame for him to reveal himself now," Melwani says.

But she offered a small clue.

It's not her father -- like some of her fans believe. Nor is it a random relative making puns and dad jokes in her living room.