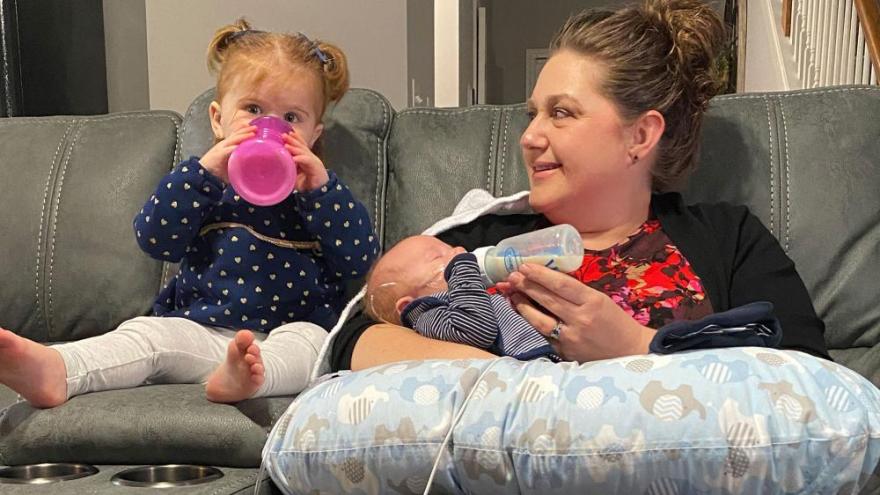 Nicole Keene with her son and daughter. Nicole's husband passed away due to the coronavirus.

(CNN) -- Jeffery Michael Keene was a devoted husband, father and an Army combat veteran. He had served four tours in Afghanistan and Iraq during his 12 years of service. Despite being in the front lines of war, he would face his deadliest challenge at home.

In the years since leaving the military, he and his wife, Nicole, welcomed their first child, Adalyn, and moved to Lexington, Kentucky, from Texas. He found a job as a service specialist at a local car dealership, making him the sole breadwinner. The Keenes were expecting their second child, a boy, in December.

Instead, the baby was born prematurely on October 26. But Michael, 39, would never know. Struggling with Covid-19 symptoms, he died two days later, in the same hospital where his son was receiving emergency care.

The joy and sorrow of those traumatic days tested Nicole Keene's faith. "I don't know why He answered my prayers for Wesson and not for Michael," she told CNN. "It makes me very angry. But I keep praying because He gave me a miracle."

Early in October, Nicole said that Michael started complaining of having a scratchy throat. Since she was pregnant, they got tested for Covid-19 at the first available appointment two days later. They knew the results within the hour. Nicole tested negative while Michael tested positive.

Over the next few days, Michael's condition deteriorated. Nicole, a respiratory therapist, would guide her husband through daily breathing exercises at home.

It wouldn't be long before the couple decided Michael should seek medical attention.

"He got sick pretty quick. It was his fever that concerned me the most, with how high his fever was. It was 104.5," Nicole said.

Michael was admitted to University of Kentucky Albert B. Chandler Hospital in Lexington. "They started him right away on oxygen, and they moved him into the ICU fairly quickly after that. I got a call the next morning, saying that they wanted to intubate him already. And I just, I was terrified. And just knew that [when] you get on the ventilator and it's really hard to get off with Covid," Nicole said.

The couple decided to try alternate methods before having to eventually intubate Michael, starting with a non-invasive type of ventilator. "They put him on the BiPAP [machine], his anxiety was very high, very high. I mean he has PTSD. And he just really struggled."

On October 26, Nicole got a call from her husband's doctor sharing good news for the first time: Michael's breathing tube would be removed. "I thought the worst was over," she recalled.

That same day, hours after a routine pregnancy exam, Nicole found herself in the hospital due to complications. She was 34 weeks pregnant and became upset after not feeling the baby move.

Father, son in the same hospital

Michael Wesson was born unresponsive, and after 15 minutes of resuscitation he came to life. When Nicole woke up, she was told the baby was being transferred to a hospital with more specialized care. Both father and son would find themselves in the same facility fighting for their lives.

At the doctor's advice, Michael never knew his new baby was nearby.

"They had advised me to not tell my husband, because he was very on the edge of being re-intubated because his anxiety was really high. He was still struggling to breathe."

Two days later, while recovering in the hospital, Nicole got a visit from her husband's doctor. He told her Michael was on the road to recovery "and that he'd probably be able to leave the hospital in about two weeks [and] go to rehab facility."

The good news did not last long. Hours later, the doctor told her Michael had taken a turn for the worse and the medical staff had been trying to stabilize him for 45 minutes. She raced to her husband's side fully covered in PPE just in time to hold his hand while he took his last breath.

"I just felt everything, all of our dreams, everything just like came out of me. I could just see our whole life just slipping away."

Her baby would spend five weeks in the intensive care unit before coming home with an oxygen tank. Doctors have told Nicole he has a brain injury but only time will tell the extent of the injury.

Nicole spends her days sorting out her financial future when she's not busy caring for her two children. She is unsure if she'll be able to return to work as a respiratory therapist given the medical needs of Wesson. She also wrestles with the trauma of seeing would-be patients and families going through the same loss, if she were to return to her work.

For now, Nicole is getting by with the support of her community, through a GoFundMe page, and Social Security assistance because of her husband's death. She continues to educate herself about other benefits her children might have access to through his military pension.

Jeffery Michael Keene was laid to rest in Fort Jackson National Cemetery in South Carolina, near where his parents live. Nicole may move to the area to be close to her late husband and to raise their children with the support of her in-laws.

"There's a lot of guilt, like just living every day," Nicole said. "Even that I'm here and he's not and the kids...just without their dad, growing up without him. He was an amazing man, amazing father."