Shark and ray populations have dropped 70% and are nearing 'point of no return,' study warns 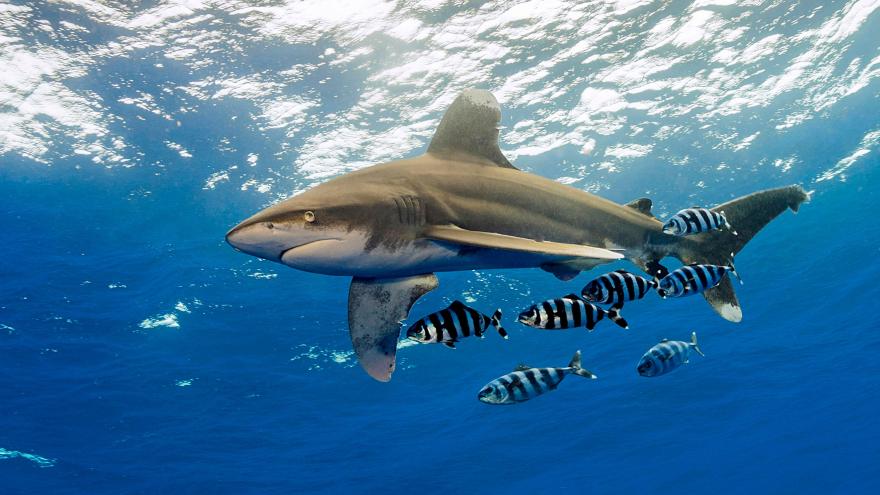 (CNN) -- Some species of sharks and rays could disappear from our seas altogether after a sharp drop in their numbers due to overfishing in the past 50 years.

A study published Wednesday in the journal Nature found that shark and ray populations fell by 71.1% from 1970 to 2018.

"Knowing that this is a global figure, the findings are stark," said Nick Dulvy, a biologist at the Simon Fraser University and a co-author of the study. "If we don't do anything, it will be too late. It's much worse than other animal populations we've been looking at."

Of all 31 species of oceanic sharks and rays, 24 are now threatened with extinction, several of which are classed as critically endangered -- the highest threatened category.

"It's an incredible rate of decline, steeper than most elephant and rhino declines, and those animals are iconic in driving conservation efforts on land," Dulvey said.

In the study, researchers used two major biodiversity indicators -- the Red List Index, a list measuring extinction risk, and the Living Planet Index, a dataset measuring changes in population abundance -- to map out the rate of change of species populations over the decades.

Their results revealed "an alarming, ongoing, worldwide decline in oceanic shark populations across the world's largest ecosystem over the past half-century, resulting in an unprecedented increase in the risk of extinction of these species," said the study.

Factors like human disturbances and climate change place pressure on these species -- but overfishing is by far the largest threat, and relative fishing pressure (which takes populations into account) has increased 18-fold since 1970, the study found.

Sharks in particular are fished for their meat, fins, gill plates and liver oil -- they were so heavily hunted during the peak of overfishing in the early 2000s that between 63 million and 273 million sharks were killed every year, the study found.

In Asia, shark fin is a prized ingredient for shark fin soup, long viewed as a status symbol at Chinese dinners and banquets. A 2018 study in the journal Marine Policy found that in Hong Kong, the "world's biggest shark trading hub," shark fin imports have doubled since 1960.

Sharks are also particularly vulnerable to over-exploitation due to their low population growth rates and long generation times -- in some shark species it can take several years, even decades between the birth of an individual and the birth of its first offspring. Rays, too, have faced rapid depletion and local extinction due to overfishing in their historical habitats.

There are some encouraging signs for specific species -- the white shark, which had seen a population crash in the 20th century, is now showing signs of recovery in several regions thanks to government bans and policies, the report said. Hammerhead sharks are also rebuilding their populations in the Northwest Atlantic, due to strict quotas in US marine territories.

However, the threat of overfishing far outpaces any trade regulations or sustainable fisheries management, researchers warned.

Few countries have imposed catch limits specific to oceanic sharks, and fewer yet have been able to rebuild populations that were shattered by overfishing in the past century. Despite governments signing international treaties, weak implementation has failed to effectively restrict trade or retention of these species, the report said.

"We can see the alarming consequences of overfishing in the ocean through the dramatic declines of some of its most iconic inhabitants," said Nathan Pacoureau, the paper's lead author.

"It's something policy makers can no longer ignore. Countries should work toward new international shark and ray protections, but can start immediately by fulfilling the obligations already agreed internationally."

The study urged immediate reform to "prevent shark population collapses" and the potentially disastrous consequences for their ecological systems.

Specifically, researchers called on governments to adopt catch limits for oceanic sharks that can support sustainable fisheries, and bans on shark or ray retention -- actions that are crucial to saving these shrinking populations "before depletion reaches a point of no return."