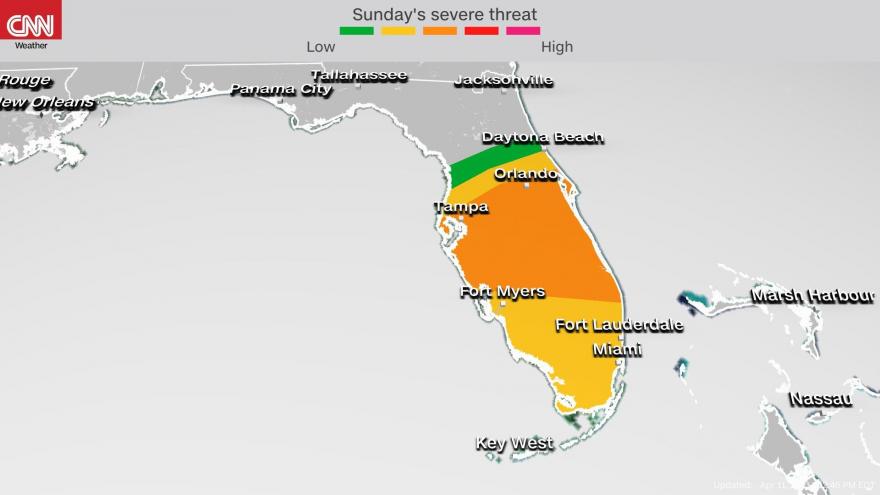 Severe weather across central Florida is causing delays at some of the state's major airports as the storm threat continues to increase.

(CNN) -- Severe weather across central Florida is causing delays at some of the state's major airports as the storm threat continues to increase.

Sunday's severe storm threat across the Florida Peninsula has been increased to an "enhanced" risk, level three of five, according to NOAA's Storm Prediction Center (SPC). This threat level includes the cities of Tampa and Orlando. The "slight risk, level 2 of 5, has also been extended and includes Miami and Fort Myers.

The threat includes 15 million people across central and southern Florida.

Airports in Orlando, Tampa, Miami and Fort Lauderdale have seen delays between 45 minutes and close to two hours as air traffic is experiencing gate hold and delays taxiing.

"Damaging winds, a tornado or two, and isolated large hail are expected this afternoon across central Florida," SPC said. "The threat for a few damaging gusts will also shift southward into south Florida later this afternoon/evening."

A severe thunderstorm watch has also been issued across much of northern and central Florida, by the SPC, and remains in effect until 4:00 p.m., ET.

The primary threats include scattered damaging winds with isolated significant gusts to 75 mph, isolated large hail up to golf ball size, and a couple tornadoes and water spouts.

A cluster of severe storms organized Sunday morning across the state. This storm complex is forecast to accelerate east and south impacting the entire Florida Peninsula throughout the day today.