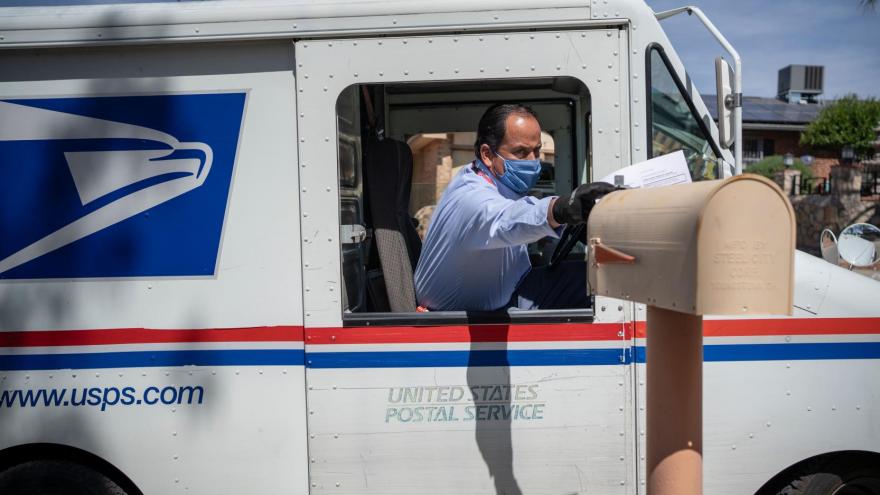 Several states are considering legal action against the Trump administration over USPS and mail-in voting.

(CNN) -- Several states say they are considering legal action against the Trump administration and the United States Postal Service to stop them from using new operational changes that could slow mail service leading up to the presidential election, which will rely heavily on mail-in voting.

At least a half dozen states including Colorado, North Carolina and Virginia are said to be reviewing their legal options against the administration.

A source with knowledge of the matter confirmed Massachusetts Attorney General Maura Healey is in touch with other attorneys general to figure out next steps, including possible legal action.

"We will not be deterred by Donald Trump's blatant attempts to undermine the integrity of our elections. We are exploring all options available to ensure everyone's vote is counted," Healey told CNN in a statement on Sunday.

The Washington Post first reported that attorneys general from Virginia, Pennsylvania, Minnesota, Massachusetts, Washington state and North Carolina, among others, are discussing potentially joining forces to sue the Trump administration.

New Jersey's Office of the Attorney General told CNN in a statement, "Attorney General (Gurbir) Grewal is deeply concerned by recent reports of potential political interference in the operations of the U.S. Postal Service. As is our standard practice, we are neither going to confirm nor deny a grand jury investigation."

Colorado Secretary of State Jena Griswold told CNN's Anderson Cooper on Friday, "We're considering all options, including legal options against the President and the postmaster general."

"There are a lot of barriers being put up from the administration -- whether that's trying to force Americans to risk their very lives to cast a ballot, to meddling with the Post Office, sabotaging the way we deliver mail, to falsehoods and lies about vote by mail," Griswold said on AC360 on Friday.

"So, I just think it's so important that every elected official, every elections official and every American citizen start sounding the alarm. The rhetoric coming out of the White House is something that you hear under dictatorships, not in the United States. We have to act. We cannot allow him to tilt this election."

The Post also reported that the states involved in discussions expect to announce legal action early this week, according to several people involved in the talks.

A handful of state officials made their thoughts known on Twitter this weekend.

New Jersey Rep. Bill Pascrell, a Democrat, announced on Friday that he has made a criminal referral to his state's attorney general and asked him to empanel a grand jury to investigate whether the Trump administration has violated any state election laws.