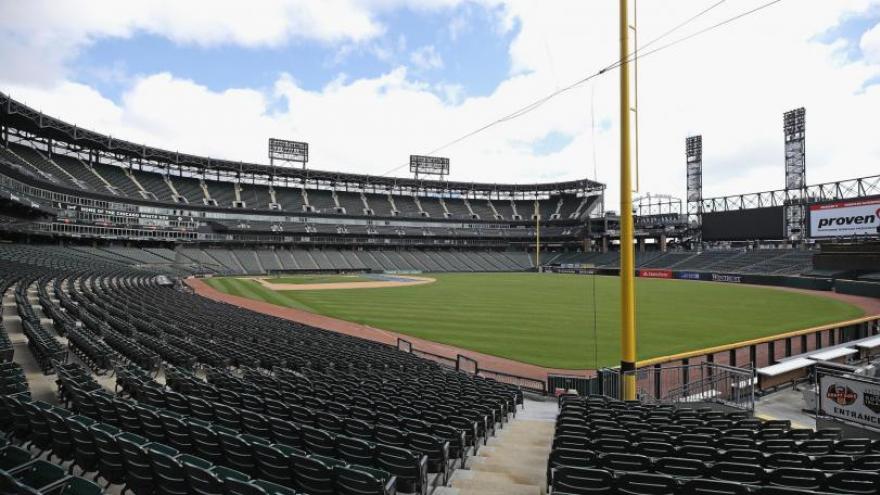 A general view of Guaranteed Rate Feld, home of the Chicago White Sox, on May 08, 2020 in Chicago, Illinois. The 2020 Major League Baseball season is on hold due to the COVID-19 pandemic.

It is unknown how many players or staff have tested positive, or which teams have been impacted, according to USA Today.

The news of the positive tests was released in a letter obtained by USA Today sent from MLB's Deputy Commissioner Dan Halem to Player's Association attorney Bruce Meyer, as the two sides work to come up with a formal agreement to get the player's back onto the field, to salvage at least some of the season.

"The proliferation of COVID-19 outbreaks around the country over the last week, and the fact that we already know of several 40-man roster players and staff who have tested positive, has increased the risks associated with commencing spring training in the next few weeks," Halem wrote.

The two sides are trying to hammer out complicated issues like player compensation, quarantine measures for players, and the number of games to be played.

Several players are publicly questioning the leaking of the letter, on social media, as negotiations between the two sides have taken a turn for the worse in recent days.

Washington Nationals pitcher Sean Doolittle tweeted Monday, "First, I hope everyone is feeling ok and recovering well. But the timing of this leak is suspicious and it feels really gross."

CNN has reached out to MLB and the players' union for confirmation about this report.