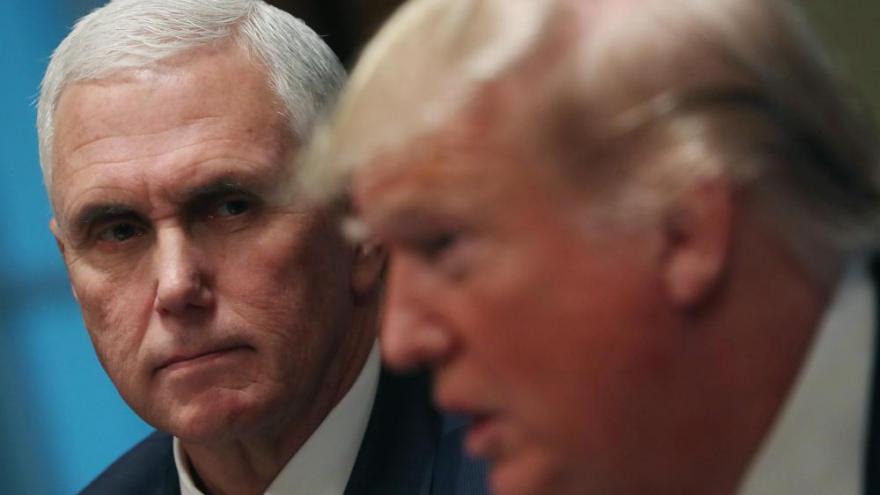 Vice President Mike Pence is 'highly unlikely' to pursue the 25th amendment. Pence is seen here with President Donald Trump in the Cabinet Room on December 9, 2019 in Washington, DC.

(CNN) -- Inquiries about invoking the 25th Amendment have been coming into Vice President Mike Pence's advisers and those discussions have been under way, a source close to the vice president said Thursday, with several Cabinet secretaries informally discussing the matter.

But it is "highly unlikely" that Pence would pursue that path at this point, the source said, given that the effort is expected to be unsuccessful. Pence himself has not discussed invoking the 25th Amendment with any Cabinet officials, an administration official told CNN.

However, two Cabinet secretaries have called fellow members of the Cabinet to take their "temperatures" about demanding a Cabinet meeting with President Donald Trump to confront him about his behavior, three senior administration officials told CNN.

The two Cabinet secretaries discussed the possibility of demanding the President deliver a public address committing to a peaceful transfer of power, which Trump did Thursday evening in a pre-recorded video.

Hanging over the meeting would be the possibility that a majority of the Cabinet could invoke the 25th Amendment and strip Trump of his power as president.

Chiefs of staff of federal departments have also been calling each other to discuss the possibility.

Some of the secretaries are hesitant to agree to a meeting because of the risk an attempt to invoke the 25th Amendment would run, or that they would draw Trump's ire.

Some officials were also concerned about the optics of holding a Cabinet meeting amid national discussions about the 25th Amendment. "Why take the risk?" one senior official said.

On Thursday night, Trump acknowledged in his pre-recorded video that he would not serve a second term. It's not known yet if that was enough to assuage Cabinet members' concerns and to have taken the discussions off the table.

A White House adviser in discussions with senior officials said Trump only recorded the video because his presidency is currently threatened by looming resignations and potential impeachment.

"I think that video was done only because almost all his senior staff was about to resign, and impeachment is imminent," the adviser said.

"That message and tone should have been relayed election night ... not after people died," the adviser added.