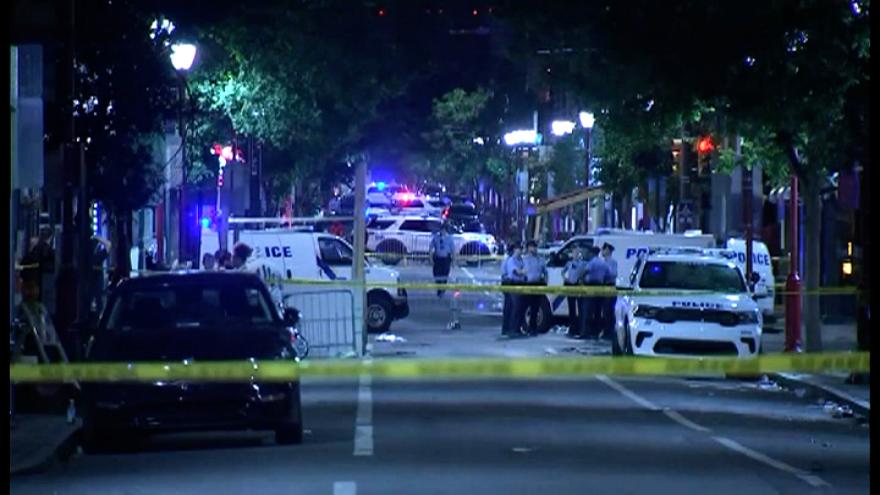 (CNN) -- A bustling entertainment district turned into a scene of carnage when multiple shooters opened fire in the South Street area of Philadelphia, police said.

One officer was "within about 10 to 15 yards" of one of the shooters and fired at the suspect, Pace said. "We're uncertain whether he was struck or not, but the officer was able to get that individual to drop his gun and flee."

Two handguns were recovered at the scene, including one with an extended magazine, Pace said. But as of early Sunday, no arrests had been made.

The identities of the two men and one woman killed have not been released.

The violence in Philadelphia marked the sixth mass shooting in the US just this weekend, according to the non-profit organization Gun Violence Archive.

"The surge in gun violence that we've seen across the nation -- and here in Philadelphia -- makes me not just heartbroken, but angry," Philadelphia Mayor Jim Kenney said Sunday.

"Once again, we see lives senselessly lost and those injured in yet another horrendous, brazen and despicable act of gun violence."

Hundreds of people were in the area

South Street is "known for being a corridor of entertainment" with multiple bars and restaurants, Pace said.

"There were hundreds of individuals just enjoying South Street, as they do every single weekend, when this shooting broke out."

The motives for the shootings remain unclear.

There have been at least 239 mass shootings so far this year, according to the Gun Violence Archive. CNN and the archive define a mass shooting as one in which at least four people are shot, excluding the shooter.

'It's time for real action'

The mayor said he's fed up with senseless gun violence and called for stronger laws to help prevent violent people from getting guns.

"We cannot accept continued violence as a way of life in our country. Until we address the availability and ease of access to firearms, we will always be fighting an uphill battle," said Kenney.

"I will continue to fight to protect our communities and urge others to advocate for stronger laws that keep guns out of the hands of violent individuals."