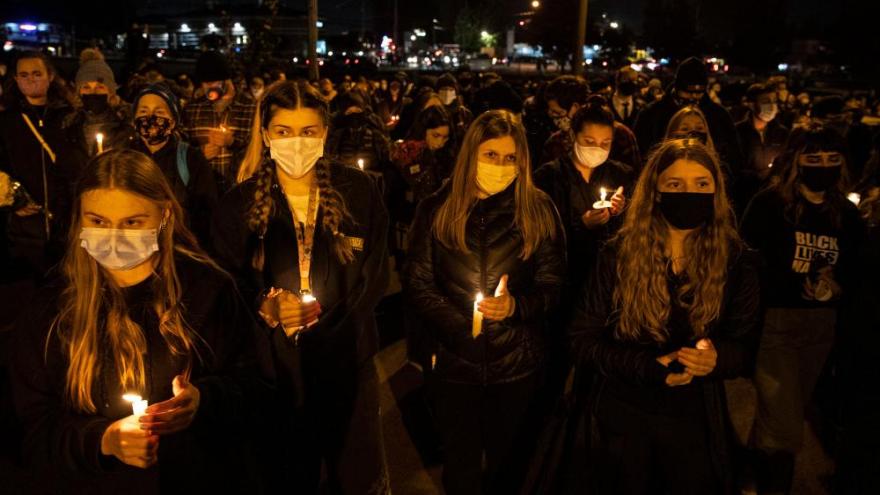 People gather for a vigil Friday for Kevin Peterson Jr., who was fatally shot by sheriff deputies.

(CNN) -- A candlelight vigil in memory of a Black man shot and killed by sheriffs in Clark County, Washington state, turned tense on Friday night, leading to at least seven arrests and the vandalism of law enforcement buildings.

The vigil was in memory of Kevin Edward Peterson Jr., 21, who was shot and killed Thursday evening after he displayed a handgun during an encounter with three Clark County Sheriff's Office deputies, according to the unit investigating the shooting.

After the vigil ended people gathered near a bar where there was a skirmish with counter-protesters, according to CNN affiliate KATU. Cars were seen circling the area, some people were seen with guns and flags, and there was an altercation between two people as well, KATU said.

Peterson was fatally shot Thursday evening after he was approached by law enforcement while sitting in his vehicle in a motel parking lot. The deputies and officers with a local drug task force suspected him of selling drugs, per a statement from the Southwest Washington Independent Investigative Response Team (SWIIRT), which is heading an independent investigation.

SWIIRT's statement does not say whether Peterson fired his handgun, but notes a pistol was found near his body at the scene. All deputies involved in the incident have been placed on administrative leave pending the investigation, SWIIRT said.

"The information I have is that upon entering the parking lot of a bank, the man reportedly fired his weapon at the deputies," Clark County Sheriff Chuck Atkins said at a press conference. Atkins acknowledged that, in accordance with state law, his department is not involved the investigation of the shooting.

"I can say that our agency is grieving, as is the Peterson family, and our community," Atkins said.

He promised to ensure "a complete, thorough independent determination of what happened, how it happened and what can be learned from this incident."

Peterson's death came amid a national reckoning over racial injustice in America, following the police killings of other Black men and women like George Floyd in Minneapolis and Breonna Taylor in Louisville, Kentucky, among others.

On Friday evening, hundreds of people gathered in the city of Vancouver's Hazel Dell neighborhood for a candlelight vigil in Peterson's memory, according to The Columbian, a local newspaper.

A memorial made up of flowers and signs was left along a fence near the site where Peterson was killed, KATU reported. Video from KATU showed members of the crowd holding candles and chanting "Black lives matter" and Peterson's name.

But a separate crowd gathered close to the vigil, some of whom were armed, waving American flags and those supportive of President Donald Trump, The Columbian reported.

Small skirmishes broke out, involving pushing and shoving between members of the two groups. KATU reported seeing a man was a "assault rifle" walk through the middle of the road and people in cars pepper spraying one another.

Following the vigil, members of both groups made their way downtown near Esther Short Park. Price said there was damage to property, including broken windows at businesses, the sheriff's headquarters, the prosecutor's office, the jail and the juvenile detention center.

Police declared an illegal assembly and ordered the crowds to disperse, Price said. At least seven people were arrested after refusing to leave, he said.