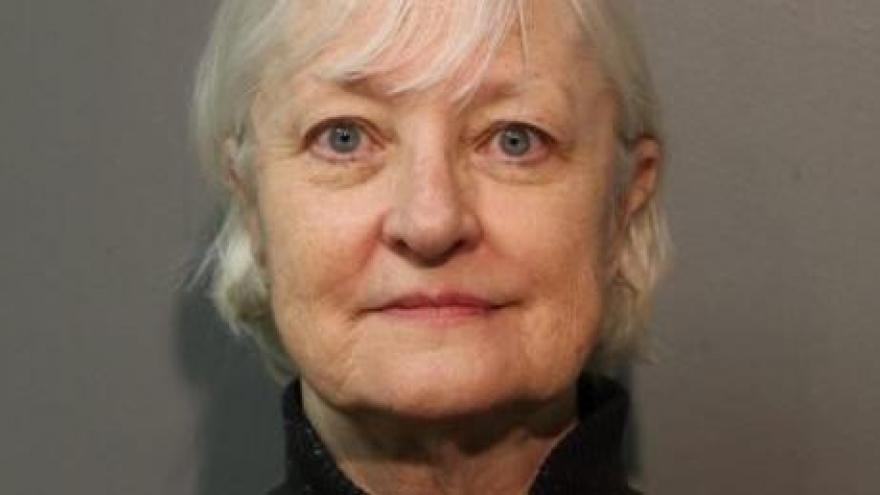 (CNN) -- The woman who has been nicknamed a "serial stowaway" for her repeated attempts to sneak onto flights without boarding passes was arrested again, Chicago authorities said.

Marilyn Hartman was taken into custody Friday night after she tried to pass through Chicago's O'Hare International Airport security without a boarding pass or identification, the Chicago Police Department said in a news release.

The Illinois woman was charged with one felony count of criminal trespass to a registered area/airport and is scheduled to appear in court Sunday morning, the release said.

Hartman was still on probation from a previous trespassing incident, which prohibited her from going to O'Hare or Midway airports without a boarding pass, according to the release.

Friday's arrest adds to a stack of at least five others for Hartman.

Last year, she was arrested in O'Hare after British officials had detained her in London. She was charged with a misdemeanor count of trespassing and a felony count of theft after she successfully traveled from Chicago to London without a passport or boarding pass.

She was ordered to undergo a psychiatric evaluation after that trip.

Those who have followed her arrests said the success of her evasive maneuvers depends on her ability to blend into a crowd as a seemingly harmless, elderly white woman.

She's done this before

The next day she was rearrested at Los Angeles International Airport. She was seen arriving at the airport and scouting out passenger terminals.

"Airport Police officers did not observe Hartman attempting to purchase an airline ticket and she did not have a ticket or boarding pass in her possession when arrested," the airport had said in a statement.

Later that month, Hartman was given a warning in Phoenix for trying to enter a Sky Harbor Airport security checkpoint without a ticket. Days later, she was arrested in an airport terminal for criminal trespass.

She was arrested in Florida in 2015 and at O'Hare in 2016 for violating her probation, which forbid her from entering airport property. She was sentenced to six months of house arrest in a mental health facility for violating court orders to stay away from airports, CNN affiliate WBBM reported.

At the time, the Chicago Police Department described Hartman as "a habitual trespasser and stowaway."