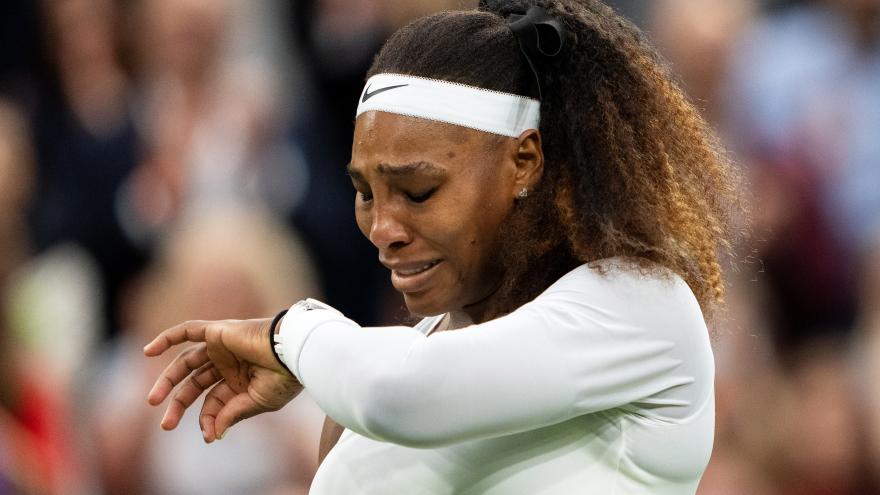 (CNN) -- Seven-time Wimbledon champion Serena Williams was forced to retire from her first-round match at the All England Club against Aliaksandra Sasnovich on Tuesday due to an injury suffered in the first set.

With Williams leading 3-1 in the first set, the 39-year-old American appeared to slip and hurt herself during a return.

Williams left the court to receive medical attention. After returning, with the match now tied at 3-3, Williams buckled at the baseline midpoint before gingerly walking off the court in tears, acknowledging the fans as she departed.

"I was heartbroken to have to withdraw today after injuring my right leg," said Williams in an Instagram post. "My love and gratitude are with the fans and the team who make being on centre court so meaningful.

"Feeling the extraordinary warmth and support of the crowd today when I walked on -- and off -- the court meant the world to me," added Williams, who was aiming to win a record-tying 24th grand-slam title.

The forfeit marks her first ever first-round loss at Wimbledon.

"Brutal for @serenawilliams but centre court is extremely slippy out there. Not easy to move out there," tweeted British tennis star Andy Murray.

READ: Federer says he 'got a bit lucky' after surviving Wimbledon scare

Williams was aiming to win a record-tying 24th grand-slam title and the forfeit marks her first ever first-round loss at Wimbledon.

Prior to Tuesday, the American tennis star had a 19-0 record in first-round matches at the famed tournament.

"It was such a nice atmosphere here, my first time on Centre Court," said Belarussian Sasnovich on court after the match, according to the Wimbledon website.

"Thank you everyone, but I am so sad for Serena. She's a great champion, but this happens sometimes in tennis. I wish all the best for her, and a good recovery.

"I like grass, I love England, I love English people, the public," added the 27-year-old Sasnovich. "I will do my best for sure. I will try to make you happy."