Serena Williams falls to a near-perfect Simona Halep at Wimbledon 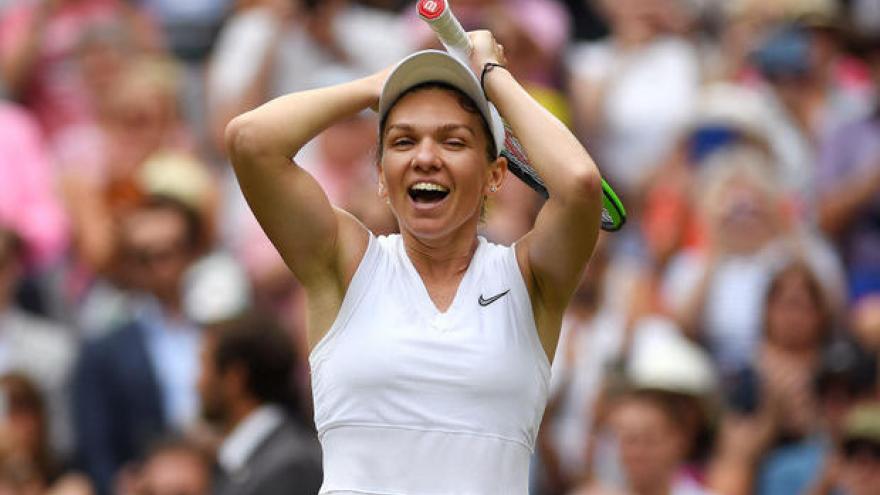 (CNN) -- History was made at Wimbledon on Saturday but if you were rooting for Serena Williams, it wasn't what you hoped for.

Simona Halep became the first Romanian to win Wimbledon when she stunned the American 6-2 6-2 in what had to be one of the finest performances in a final in the tournament's recent history.

"She really played out of her mind," Williams told the crowd.

Petra Kvitova's 6-3 6-0 victory over Eugenie Bouchard in 2014 sprung to mind as another glittering display.

Halep needed only one more minute than the Czech, 56, to see off the 37-year-old Williams.

Her three unforced errors were the fewest in a Wimbledon final since records were kept in 1998, one less than Kvitova's tally.

"I've always been intimidated a little bit when I faced Serena," Halep, who struck 13 winners, told reporters. "She's an inspiration for everyone and the model for everyone.

"Today I decided before the match that I'm going to focus on myself and on the final of a grand slam, not on her. That's why I was able to play my best, to be relaxed, and to be able to be positive and confident against her."

Halep claimed her second major after the 2018 French Open. Williams, meanwhile, fell in a third straight grand slam final for the first time in her record-breaking career.

All have been on her comeback after becoming a mom in September 2017.

"For me any loss is not easy," said Williams. "When someone plays lights out, there's really not much you can do. You just have to understand that was their day today.

"Hopefully I can raise the level of my game sometimes."

Simona Halep of Romania was winning her second grand slam title after a comprehensive 6-2 6-2 beating of Serena Williams in the Wimbledon women's singles final.

She has been short of matches due to a knee injury this season that hindered her French Open.

"Seems like every grand slam final I'm in recently has been an unbelievable effort to get there," Williams added. "It would be interesting to see how it would be under different circumstances."

Perhaps the US Open is where Williams will tie Margaret Court's all-time record of 24 majors.

"She's very kind, very nice," said Halep, who also reveled in becoming a member of the All England Club after winning the title.

Halep is a different type of player to the attacking Kvitova, a superb counterpuncher.

And unlike Kvitova, grass has never been her favorite surface. Rather it has been the clay.

But Halep was so good in her first Wimbledon final it took her seven games to make one unforced error.

Her athleticism and retrieving perhaps destabilized Williams, contributing to the top server women's tennis has ever seen hitting a mere two aces.

Halep may own a 2-9 record against Williams but both her wins have been resounding, the other being a 6-0 6-2 result at the WTA finals in Singapore in 2014 that gave her a boost of confidence.

"Today I just went for it like in Singapore," said Halep. "I had that image in my head. I really believed there is the chance to do the same thing."

The world No. 7 said she had a few butterflies before the encounter yet it didn't show. She broke Williams in the first game, part of a run where she claimed seven consecutive points.

Halep showed why she's one of the best movers around when she chased a ball in her forehand corner, then finished with a sublime backhand cross court near the net.

Williams knew all about Halep but in case she needed another reminder, that was it.

Halep got some luck in the third game, seeing her ball off the net cord stay inside the court while Williams' reply clipped the tape and landed on her side.

Also one of tennis' fiercest returners, Halep earned a double break advantage with a backhand return winner down the line.

There were few moments for Serena Williams to celebrate during a comprehensive defeat.

It was all working for Halep as he struck an ace to get to 4-0. Williams -- who led the event in aces and had hit the fastest serve so far -- didn't hit an ace until set two.

Halep's first unforced error incredibly came at 5-1, 15-0 -- a forehand into the net -- but it certainly didn't put her off.

Williams crushed a backhand cross court. Maybe not expecting it to come back, even from the speedy Halep, it did, and Williams' backhand reply landed in the net for one of her 26 unforced errors.

Williams was 2-8 in grand slam finals when dropping the opener -- her last win came in 2005 -- so it spelled trouble for the seven-time champion.

Through five games in the second set, Halep made just one unforced error.

Yes, she continued to be stingy.

A seemingly simple point for some with Halep out of position, but the 27-year-old's tenacity throughout could have prompted the miss.

"I think I was over-hitting, trying to go for too much," said Williams. "She was just getting a tremendous amount of balls back."

Simona Halep kept up the pressure with a display of flawless tennis in a 56-minute final.

Williams' serve finally clicked to prolong that game but when they were embroiled in baseline rallies, Halep won the majority of the points, mirroring the match.

And a first Wimbledon title was officially hers when Williams' forehand found the net.

Halep sunk to her knees and took it all in for a second.

Her display was one for the ages.