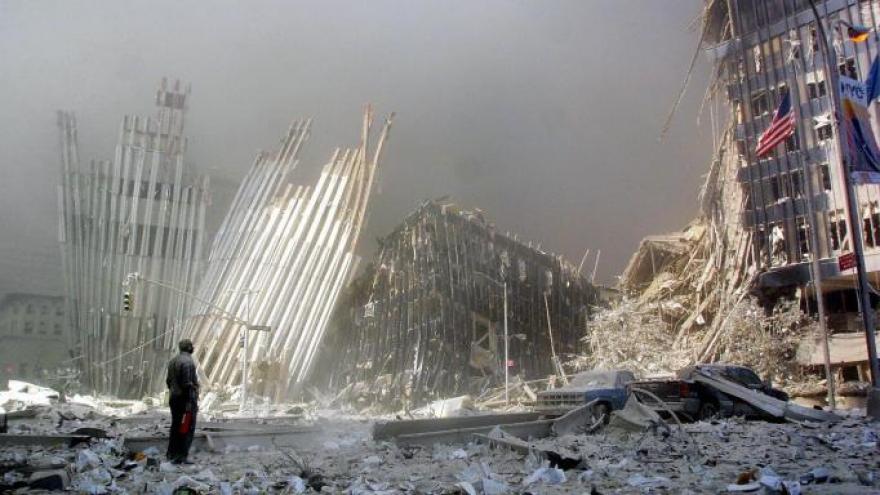 From 2001 to 2003, the September 11th Victim Compensation Fund (VCF) processed claims relating to injuries and deaths caused by the terrorist attacks of September 11, 2001.

(CNN) -- Here is a look at the September 11th Victim Compensation Fund (VCF) and the James Zadroga 9/11 Health and Compensation Act of 2010.

From 2001 to 2003, the September 11th Victim Compensation Fund (VCF) processed claims relating to injuries and deaths caused by the terrorist attacks of September 11, 2001.

In 2011, the fund was re-opened to compensate first responders and individuals who later experienced health problems related to 9/11.

The WTC Health Registry monitors the health of registrants who were directly exposed to the disaster.

The fund received 7,408 claim submissions from 75 countries. Awards were made in 5,560 of those cases and totaled over $7 billion.

The money was tax-free.

More than $8.8 billion in compensation has been rendered.

June 15, 2004 - The September 11th Victims Compensation Fund finishes its work processing death and injury claims from families and relatives of 9/11 victims. Families of those killed had until December 22, 2003, to apply for compensation. Families who agree to get compensation from the federal fund agree not to sue the airlines.

November 8, 2004 - A report by the Rand Institute for Civil Justice finds that victims of the September 11, 2001, attacks received an average of $3.1 million per person, totaling $8.7 billion. About $38 billion in all is paid out by the government, charities and insurance companies. Insurance companies pay the most, covering 51%. The majority of the money goes to New York businesses.

January 2, 2011 - President Barack Obama signs the First Responders Bill, also known as the James Zadroga 9/11 Health and Compensation Act, reactivating the September 11th Victim Compensation Fund that ran from 2001-2003. The act expands health coverage and compensation to first responders and individuals who have developed 9/11-related health problems, setting aside $2.775 billion to compensate claimants for lost wages and other damages related to the illnesses.

September 30, 2011 - The September 11th Victim Compensation Fund re-opens to serve those eligible for claims under the James Zadroga 9/11 Health and Compensation Act.

August 15, 2012 - Sheila Birnbaum announces that award distribution is on hold until the National Institute for Occupational Safety and Health decides whether to add cancer to the list of illnesses covered by the Zadroga Act.

September 12, 2012 - The final rule adding 58 types of cancer to "the List of WTC-Related Health Conditions" is published in the Federal Register.

December 18, 2015 - President Barack Obama signs a bill reauthorizing the Zadroga Act, which also extends the VCF. The bill extends the deadline for filing claims through December 2020.

February 15, 2019 - Bhattacharyya releases the seventh annual status report indicating that the VCF has insufficient funds to pay all current and projected claims.

July 29, 2019 - President Donald Trump signs an act into law which authorizes the extension of the 9/11 Victim Compensation Fund. The fund was slated to expire in 2020. But the newly signed legislation, championed by comedian Jon Stewart, ensures the compensation for victims through 2090.