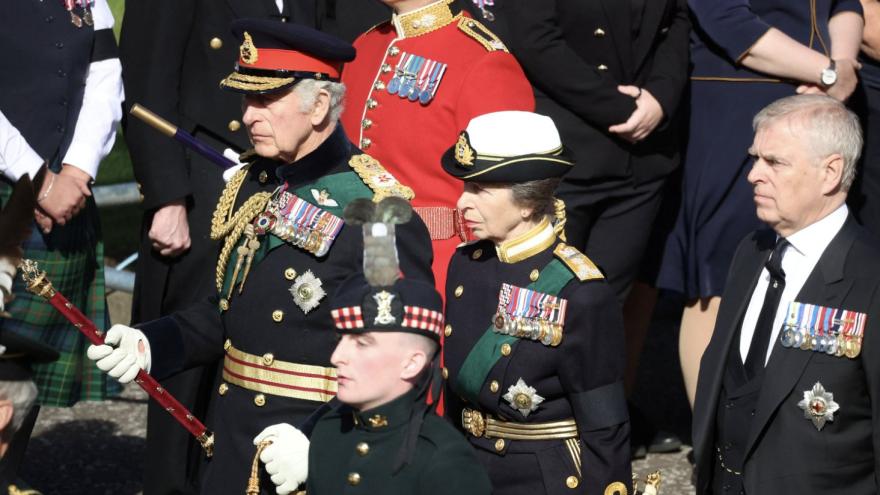 (CNN) -- King Charles III was joined by his siblings -- Princes Andrew and Edward, and Princess Anne -- as they briefly held vigil around Queen Elizabeth II's coffin on Monday evening. The royal family mounted their guard of the coffin at St. Giles' Cathedral in Edinburgh, Scotland, where it will lie until Tuesday evening.

Hundreds of mourners were queuing outside the cathedral to pay their respects on Monday evening. The cathedral will remain open to the public overnight, according to guidance issued by the Scottish Government.

Earlier Monday, a short service of thanksgiving took place at the cathedral following a procession from the Palace of Holyroodhouse. The 73-year-old monarch and his siblings walked behind the hearse, while Camilla, Queen Consort, traveled in a car behind.

Charles wore full day ceremonial uniform with the rank of Field Marshal, and carried the Field Marshal Baton given to him by his mother when he was awarded the rank in 2012.

The procession moved through crowds of onlookers standing in near-total silence on Edinburgh's streets.

Elizabeth's coffin was draped in the Royal Standard in Scotland and was dressed with a wreath of flowers, which includes dried white heather from Balmoral.

The hearse was flanked by a bearer party of the Royal Regiment of Scotland as well as a detachment of the King's bodyguard in Scotland, the Royal Company of Archers.

After processing along the Royal Mile, the coffin received a guard of honor from the Royal Company of Archers at the cathedral.

The royal family then attended a short service of prayer and reflection, joined by a congregation made up "from all areas of Scottish society," according to Buckingham Palace. UK Prime Minister Liz Truss, former Prime Minister Gordon Brown and Scotland's First Minister, Nicola Sturgeon, were also present.

"I know that the Scottish Parliament and the people of Scotland share with me a profound sense of grief at the death of my beloved mother," said Charles in an address to parliament. "My mother felt as I do, the greatest admiration for the Scottish people for their magnificent achievements, and their indomitable spirit."

Sturgeon said that Elizabeth had been "the anchor of our nation" during a speech at the parliament.

"Your Majesty, we stand ready to support you, as you continue your own life of service -- and as you build on the extraordinary legacy of your beloved mother, our Queen," Sturgeon told Charles.

Earlier, the King vowed to continue the Queen's "dedicated service" to the British people in his first address to the UK Parliament in London.

The Queen Consort accompanied Charles on his first visit to the Palace of Westminster since becoming King. In the ancient Westminster Hall, both Houses of Parliament offered their condolences on his mother's death.

"We gather today in remembrance of the remarkable span of the Queen's dedicated service to her nations and people," the King said. "While very young, her late Majesty pledged herself to serve her country and her people.

"This vow she kept with unsurpassed devotion. She set an example of selfless duty which, with God's help and your councils, I am resolved faithfully to follow," Charles continued.

As he concluded his short speech, a rendition of "God Save the King," the British national anthem, was played.

Following the visit, the monarch and his wife flew to Edinburgh, where the Queen had been lying at rest since Sunday. The pair headed straight to the Palace of Holyroodhouse for the Ceremony of the Keys -- a tradition whereby the Lord Provost offers the monarch the keys to the city.