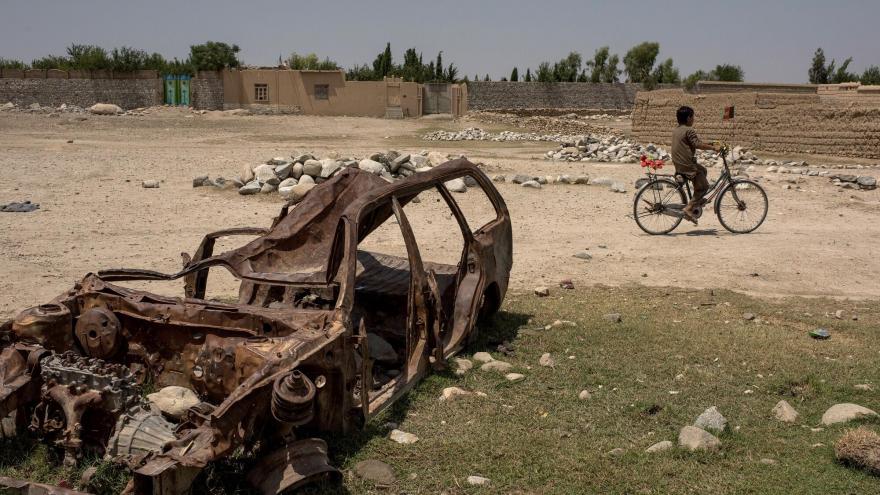 Senior Pentagon official says ISIS-K could be capable of attacking the United States next year. Pictured is a destroyed car on July 15, 2017 in Shadal Bazaar, Afghanistan.

(CNN) -- ISIS-K could be capable of carrying out attacks on the United States next year, the Pentagon's top policy official said Tuesday.

Speaking before the Senate Armed Services Committee, Under Secretary of Defense for Policy, Colin Kahl, said the group does not have the ability to carry out such an attack right now, but "we could see ISIS-K generate that capability in somewhere between six or 12 months." He added that al-Qaeda would take a year or two to rebuild that capability.

Kahl outlined the fastest timeline yet from a member of the US government on how quickly the Afghanistan-based terror organization that killed 13 US service members in late-August suicide bombing in Kabul could pose a threat to the American homeland.

In late-September, Joint Chiefs Chairman Gen. Mark Milley said that the terror threat from Afghanistan is lower than it was on September 11, 2001, but that ISIS-K or al-Qaeda could reconstitute within a relatively short timeframe.

"It's a real possibility in the not too distant future - 6, 12, 18, 24, 36 months, that kind of timeframe - for reconstitution of al Qaeda or ISIS," Milley told lawmakers. "Terrorist organizations seek ungoverned spaces so that they can train and equip and thrive and, and so, there, there is clearly a possibility that that can happen here, going forward."

The estimates from the intelligence community are based on there being no intervention from the US or allies, Lt. Gen. James Mingus, the Director of Operations for the military's Joint Staff, told the hearing. "The goal would be to keep those time horizons where they are at now, if not even further," Mingus added.

Kahl's window for a terror threat emanating from Afghanistan again is both shorter and faster, and it comes as the Biden administration is still trying to figure out how to conduct so-called over-the-horizon operations to gather intelligence and, if needed, carry out counterterrorism strikes in Afghanistan.

US in conversations with Pakistan

The US currently uses Pakistan's airspace to fly drones over Afghanistan. "We are in conversations with Pakistan to keep the air line of communication open," Kahl said.

The US is looking at other options as well for a US military presence closer to Afghanistan. "We continue to have conversations with neighboring nations and partners in the region to continue to explore opportunities for over the horizon capabilities and support," said Pentagon press secretary John Kirby at a press briefing Monday, "but I don't have anything specific on any front to read out to you today."

Formed in 2015 as an offshoot of ISIS in Syria and Iraq, ISIS-Khorasan takes its name from the region that includes Afghanistan and Pakistan. The group has been responsible for thousands of deaths since its formation, often using suicide bombings to inflict mass casualties. According to UN figures, ISIS-K launched 77 attacks in the first four months of this year.

Counter-terrorism analysts estimate its strength now at around 1,500-2,000, but that number may soon grow. Some captured ISIS-K fighters were being held in prisons near Kabul, which the Taliban emptied out as they overran the country and took control of the capital.

Already, ISIS-K has shown willingness and a determination to launch attacks against civilians in Afghanistan. The suicide bombing that killed 13 US service members on August 26 also claimed the lives of more than 150 Afghans.

The Taliban says they have carried out raids against ISIS-K in the Kabul area and elsewhere in Afghanistan, seizing weapons and documents related to the terror group's activities.

"We have seen signs ... that the Taliban is wary about Afghanistan being a springboard for al-Qaeda external attacks, not because the Taliban are good guys, but because they fear international retribution if that were to occur," Kahl told lawmakers.