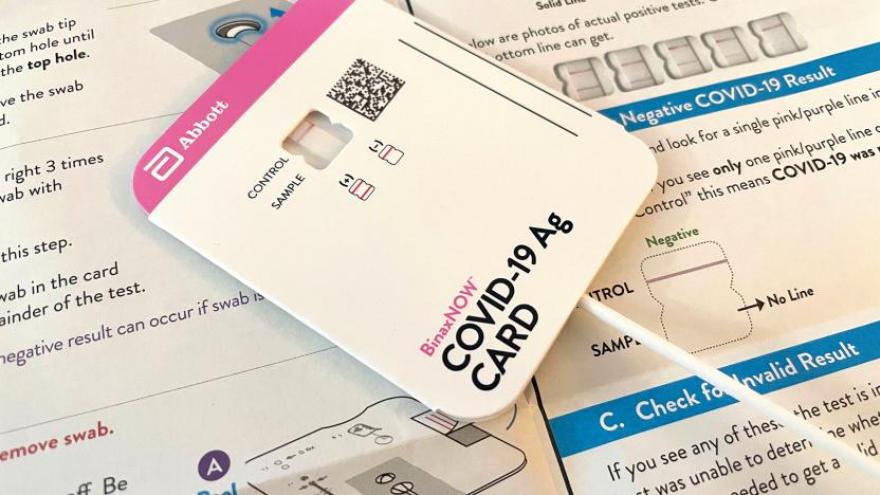 As part of its effort to contend with Covid-19, the Biden administration is requiring health insurers to cover the cost of home tests but Medicare is not subject to this requirement, so citizens in the traditional Medicare program cannot get reimbursed.

(CNN) -- Peggy Matthews-Forney cannot believe that, unlike private insurers, Medicare is not reimbursing senior citizens for the home Covid-19 tests they buy at retailers.

"As a Medicare enrollee, I am enraged," said the retired industry strategist from Denver, noting that more than three-quarters of Covid-19 deaths in the US are among the elderly. "If anyone needs to have these tests paid for, it's seniors. The ones at the highest risk are seniors."

As part of its effort to contend with Covid-19, the Biden administration is requiring health insurers to cover the cost of home tests for most Americans with private insurance.

Consumers can buy home tests online or in stores and have them paid for at the time of purchase or get reimbursed by submitting a claim to their insurer. They do not need to visit their doctor or get a prescription to obtain the free tests.

Have you tried to get a free home test at your retailer? Have you called your insurer to ask about reimbursement? Tell us about it here.

Insurers must pay for up to eight tests per covered individual per month under the program, which launched Saturday.

However, Medicare is not subject to this requirement, so the tens of millions of senior citizens and Americans with disabilities in the traditional Medicare program cannot get reimbursed.

And the roughly 27 million Medicare Advantage enrollees, who receive Medicare coverage through private insurers, must check with their carriers if they will pick up the tab.

The Centers for Medicare and Medicaid Services is exploring ways to expand reimbursement to Medicare enrollees, according to a senior CMS official. Over-the-counter tests have not been covered by traditional Medicare before, so the agency is looking at how it could add a new payment program, said the official, who did not give a timeline on a decision.

"This is definitely a priority," the official said. "We are actively working on it."

Meanwhile, the agency said that Medicare pays for Covid-19 tests performed by a laboratory at no cost when the test is ordered by a physician or other health care provider. It noted that enrollees can also visit free testing sites or order free home tests through the federal program at covidtests.gov.

Not being able to obtain free home tests at retailers will likely affect Bob Mignogna's business and social life. Mignogna, 72, runs a surfing consulting practice and has to travel for work. He also likes to entertain friends and family, including his grandchildren, at his San Clemente, California, home.

But he wants to keep himself and others safe, so he's judicious about testing. That's why he went to his local CVS as soon as it opened on Saturday to stock up. But he left empty handed after he was told that Medicare won't cover the cost of the tests -- buying eight runs about $100. He later learned that his UnitedHealthcare Medicare Advantage policy won't reimburse him.

"I would probably test a lot more frequently if I were getting them at no charge through Medicare. I'm sure I would," said Mignogna, who has a dinner with clients on Wednesday and one with friends on Saturday. "I won't be as liberal in suggesting or offering them to friends. I'll probably save them for family."

UnitedHealthcare said some Medicare Advantage policyholders have plans that cover over-the-counter products so they may be able to get home tests through that benefit. Also, all its Medicare Advantage plans cover Covid-19 testing at no charge when ordered by a doctor.

Harder to get home tests

Mark McCardle doesn't understand why Medicare would require its enrollees to go to doctors or labs, where they could be surrounded by sick people, to get tested.

"It seems like we are being discriminated against," said McCardle, 72, an Ogden, Utah, resident who retired as a contract manager from Northrop Grumman. "We have to work harder to get a test than younger people who are probably healthier."

For Kathi Meci, not having access to free home tests at retailers adds insult to injury. She's still mad that Medicare premiums shot up by 14.5% for 2022.

"And now you're excluding me from free at-home tests?" she said, noting that she was able to get free tests in Scotland when she contracted Covid-19 while vacationing there last summer.

"I'm angry that senior citizens in this country are being ignored again, especially after digging deeper into our pockets for Medicare premiums," said Meci, 65, a Las Vegas resident and retired casino consultant. "That is just so frustrating for me."