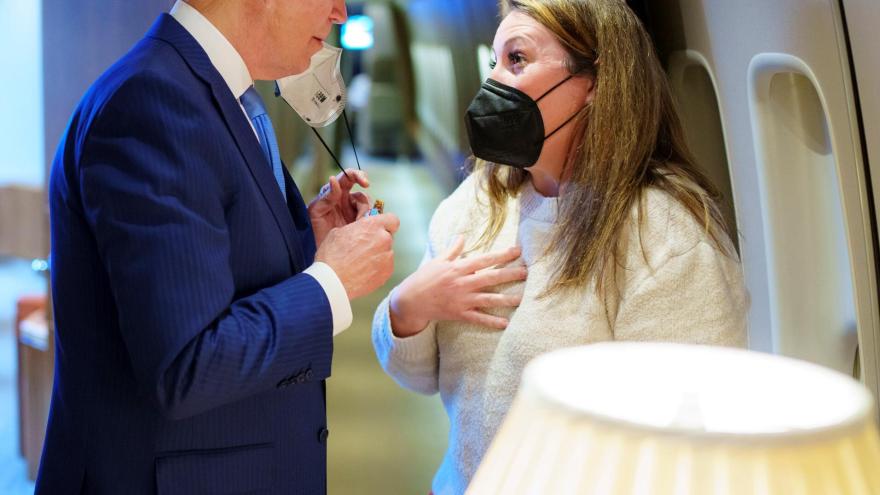 President Joe Biden speaks with Director of Message Planning Meghan Hays aboard Air Force One at Royal Air Force Base Mildenhall in Suffolk, England Saturday, March 26. Hays will depart her role as director of message planning at the White House later this month, CNN has learned.

(CNN) -- Meghan Hays, a longtime communications aide to President Joe Biden, will depart her role as director of message planning at the White House later this month, CNN has learned.

Hays, a special assistant to the president, has spent a total of eight years working for Biden, including during his vice presidency, 2020 presidential campaign and presidential transition before joining the White House communications team when he took office in 2021. She's one of roughly a dozen current officials who have worked with Biden through each of those periods.

"Very few people have had as deep an impact on every facet of President Biden's communications as Meghan has," White House Communications Director Kate Bedingfield said. "She's a problem solver and the person you want fighting alongside you when the going gets tough. We will miss her tremendously."

Hays has been responsible for crafting media strategy for many of the President's most public-facing moments, ranging from his first primetime address on Covid-19 in the East Room of the White House to Biden's encounters with Ukrainian refugees in Poland.

After the killing of al Qaeda leader Ayman al-Zawahiri last month, Hays coordinated where and how the President would deliver his speech announcing the historic operation while also in isolation with Covid-19, ultimately selecting a socially distanced set-up on the Blue Room balcony.

"We have all turned to Meghan to steady the ship and handle interviews, town halls, trips, and everything else to enable the President to share his vision and message with the American people," White House senior adviser Anita Dunn said. "Meghan's tenacity and fortitude helped us build a better campaign, transition, and White House communications operation and we will all miss her."

Hays also has led strategic planning for the President's domestic and foreign travel and interacted closely with reporters, producers and photojournalists at the White House and on trips, often seen at the President's side as he fielded questions from press.

"World leaders regularly commented on her expertise, creativity, and willpower -- and President Biden equally regularly told them they needed to find a Meghan," Sullivan added.

Hays, a California native, began working as an advance staffer for then-Vice President Biden in 2012 before serving as deputy communications director and director of message planning in the office of the vice president. During the presidential campaign, she served as deputy communications director for strategic planning, traveling the country with Biden and overseeing many of his media engagements and events.

Hays is the latest in a string of officials to announce their departures ahead of the midterm elections. Two other senior members of the communications team, deputy communications director Pili Tobar and director of broadcast media Mariel Saez, departed earlier this year.

Last month, Bedingfield announced she would remain on in her role as communications director after saying she would depart the White House weeks earlier.