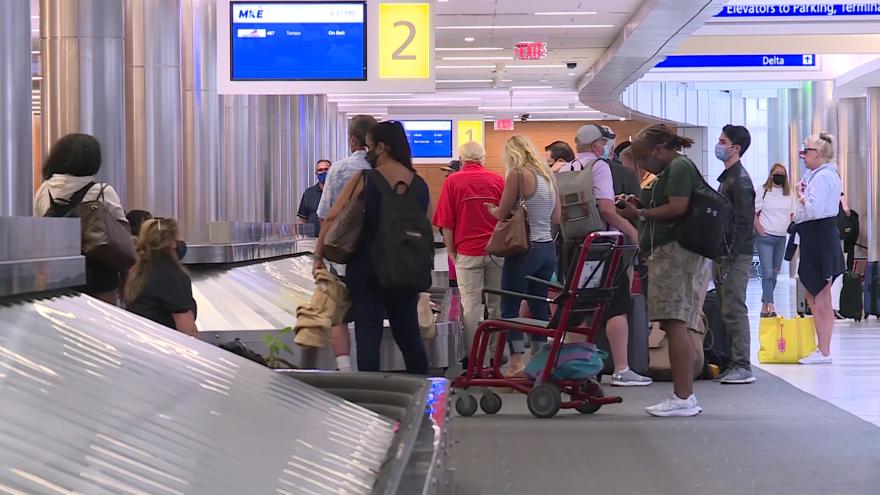 (CNN) -- A pair of US senators are asking the Biden administration to intervene and remove expiration dates on flight credits issued to airline passengers during the coronavirus pandemic.

Democratic Sens. Ed Markey of Massachusetts and Richard Blumenthal of Connecticut on Wednesday asked the US Department of Transportation to determine that it is unfair to customers to place expiration dates on the credits. Federal law allows the department to prohibit "unfair or deceptive practices." Consumer complaints about refunds skyrocketed during the pandemic -- while taxpayers provided more than $50 billion to airlines to cover payroll expenses and offered billions more in loans.

The senators' request comes as the airline industry says passengers are using many of the credits. The industry group Airlines for America told Markey and Blumenthal last month that "approximately half of all credits issued since summer 2019 for travel slated to occur during the pandemic have been redeemed" and the "redemptions account for 10-15 percent of monthly ticket sales."

The remaining outstanding value of unexpired flight credits is unclear. In financial statements earlier this year, American Airlines and United Airlines reported a combined $5.7 billion in credits as of December 31.

Federal rules say would-be travelers are entitled to refunds if airlines cancel or substantially change flights. But airlines' own terms of service govern refunds or credits when passengers cancel, and many airlines choose to issue vouchers for future travel rather than cash.

Markey and Blumenthal wrote in their letter to the Transportation Department that passengers had been pushed since spring 2020 to cancel their travel plans.

"Many Americans proactively cancelled their flights to protect their health at the urging of health officials, only to find themselves ineligible for refunds that would have been available had they waited for airlines to cancel their flights for them," they wrote.

DOT did not immediately respond to a request for comment from CNN late Tuesday.

The senators had previously written to airlines urging them to refund the credits to customers as cash. Airlines for America said last month that its members had issued cash refunds when required but that returning cash to every passenger would have been ruinous to the carriers.

"That practice was not done with ill intent, but instead underscored the reality that if air carriers had refunded all tickets in the form of cash, many would have been forced to declare bankruptcy," Nick Calio, president and CEO of Airlines for America, wrote in May in response to Blumenthal and Markey.

The group also said many airlines have extended the expiration dates for many credits into 2022 and that its members had refunded nearly $13 billion in cash to customers in 2020.

It's likely that at least some of the 2020 complaints were filed by travelers who, under the strict terms, were not entitled to refunds. But Consumer Reports Advocacy, which has pushed the airlines and policymakers to address customer dissatisfaction with credits, said it had documented cases of travelers whose circumstances called for refunds being pushed to take credits instead.

The Transportation Department has reminded airlines of the rules on several occasions, and earlier this month proposed a $25 million fine against Air Canada for failing to provide timely refunds to more than 5,000 customers. The airline told CNN it would dispute that sum, arguing the department's rules were not binding but were instead guidelines.