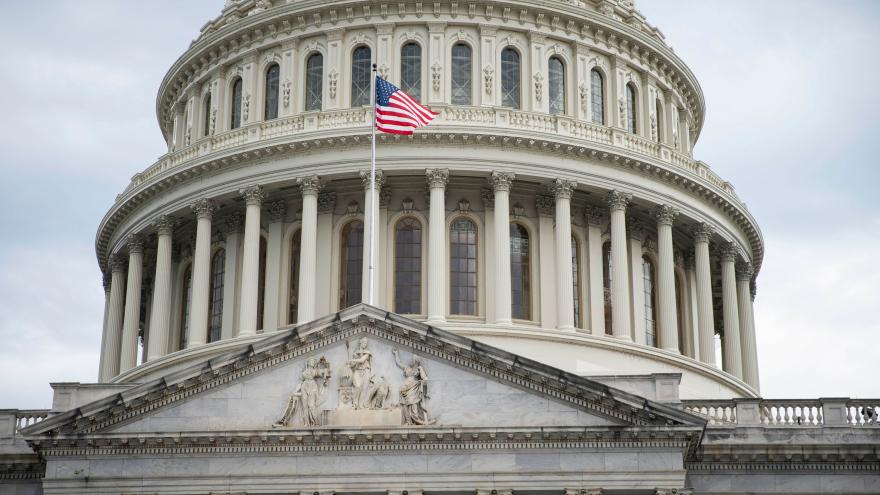 (CNN) -- The Senate will take a key vote on Thursday in an attempt to advance a bill designed to combat domestic terrorism. The vote comes as lawmakers are under intense pressure to take action in the wake of multiple recent episodes of horrific gun violence.

The bill passed the House last week following a tragic mass shooting at a supermarket in a predominately Black neighborhood in Buffalo, New York. It is not expected to advance in the Senate, however, due to GOP opposition.

Republicans have pushed back against the bill put forward by Democrats, describing it as partisan and unnecessary. At least 10 Senate Republicans would need to vote with Democrats to overcome the 60-vote threshold imposed by the filibuster -- and that is not expected to happen.

Only one Republican -- Rep. Adam Kinzinger of Illinois -- voted for the measure when the Democrat-led House approved it after the Buffalo supermarket shooting. The Justice Department is investigating that shooting as a hate crime and "an act of racially-motivated violent extremism."

The nation was rocked by another devastating mass shooting on Tuesday when an 18-year-old gunman killed 19 children and two adults at a Texas elementary school before he was killed by law enforcement officers, officials said.

The elementary school shooting has sparked impassioned calls from Democrats for legislation to counter gun violence and renewed a debate over gun control on Capitol Hill, but it appears highly unlikely that the long-lasting and deeply entrenched partisan stalemate over gun control will be broken.

The expected failure of the domestic terrorism prevention bill in the Senate is poised to underscore yet again how challenging it is for lawmakers to enact any kind of major policy change in the wake of mass shootings amid a highly polarized political environment and widespread GOP opposition to gun control measures.

The offices would track and analyze domestic terrorist activity with the goal of better preparing the federal government to identify risks in order to take preventative action.

The bill creates a requirement for biannual reporting on domestic terrorism threats. It also calls for assessments of the threat posed specifically by White supremacists and neo-Nazis.

Senate Republican Whip John Thune, who represents South Dakota, said Wednesday it is "unlikely" that 10 Republicans will vote to advance the House-passed domestic terrorism bill because, he said, the White House and Department of Justice have indicated they already have the authorities legislated in the bill.

"It's a lot of stuff they already have authority to do," Thune said, providing the first formal confirmation from a GOP leader that the bill, which is a top priority for Democrats, won't pass the Senate.

Senate Majority Leader Chuck Schumer on Tuesday implored senators to vote to advance the legislation later in the week.

"This week all of us in the Senate will have a chance to take a stand against extremism by voting to begin debate on the Domestic Terrorism Prevention Act," he said.

"This bill is as much of a no-brainer as it comes," he said, saying that it "will crack down on domestic terrorism and extremism."

Senate Democrats took steps on Tuesday night to place two House-passed background checks bills onto the legislative calendar so they can be voted on. It's unclear, however, when the Senate might vote on the measures and they would not be expected to overcome a GOP filibuster.