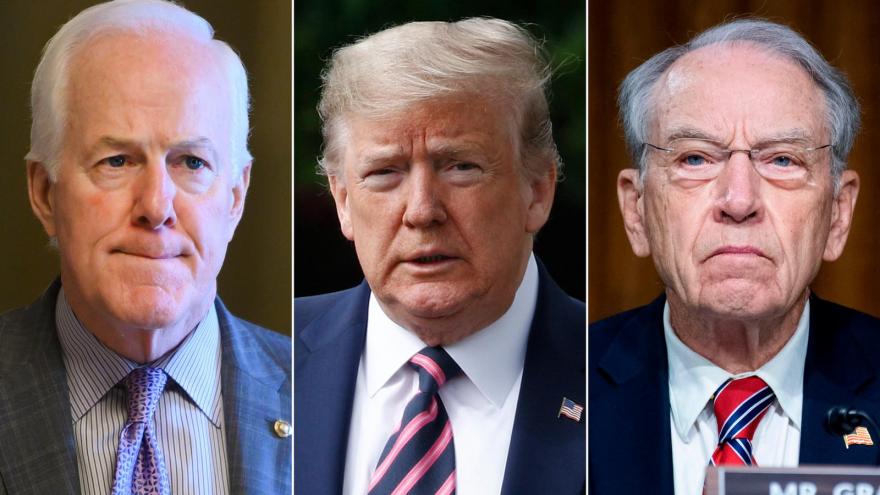 At left, Sen. John Cornyn of Texas; at center, President Donald Trump, and at right, Sen. Chuck Grassley of Iowa. All men pictured are Republicans. Grassley pushed back on the idea of including a payroll tax cut in the emerging GOP recovery plan, saying on Monday that it's a "public relations problem" and would have little economic impact.

(CNN) -- Senate Republicans are pushing back against key White House priorities for the next economic recovery package, prompting top administration officials to move behind the scenes to shore up a growing split within the party over its response to a crisis that is dominating this election year.

Hot button issues -- including whether to have a payroll tax cut, ramp up funding for coronavirus testing and tie additional money for schools to reopening -- have opened up a divide between Senate Republicans and the Trump administration, complicating efforts to put up a united front by the party amid stiff Democratic opposition.

"I don't think that's a particularly good idea personally," Senate Majority Whip John Thune, a South Dakota Republican, said on Monday, rejecting the call by the White House to tie money for schools to reopening. "I think it's better to let the school districts and local officials decide what's best. I just don't think you can come up with a national federal policy that's one size fits all. The circumstances are very different."

A growing number of Senate Republicans are also throwing cold water on President Donald Trump's push for a payroll tax cut as part of the package and White House efforts to deny additional money for testing and tracing.

The GOP plan has little chance of becoming law since Democrats are almost certainly going to block it. But it will nevertheless serve as an opening bid by Republicans before bipartisan negotiations over the next stimulus begin in earnest.

Senate Finance Chairman Chuck Grassley, a Republican from Iowa, pushed back on the idea of including a payroll tax cut in the emerging GOP recovery plan, saying on Monday that it's a "public relations problem" and would have little economic impact. Republican Sen. John Cornyn of Texas warned that a payroll tax cut "divides our conference," while Senate Majority Leader Mitch McConnell would not say whether Republicans will accept a payroll tax cut as he walked off the Senate floor Monday afternoon.

"There are a lot of Republicans who don't like it, for a lot of different reasons," Thune said of a payroll tax cut. "One of which is we don't think it changes behavior. I mean if you get a $60 increase in your check in the fourth quarter of this year, when you already got all kinds of holiday stuff going on -- the difference between that and getting a check in the mail that you actually like ... I think if you want to get something out of it for the economy (direct payments) make a lot more sense."

On the issue of testing and tracing, GOP Sens. Lisa Murkowski of Alaska, Susan Collins of Maine, Bill Cassidy of Louisiana, Shelley Moore Capito of West Virginia and others stressed to reporters on Monday that more money for testing is essential in the next stimulus, breaking with the White House posture that more money for the US Centers for Disease Control and Prevention for contact tracing and testing shouldn't be included in the next round of aid.

Collins, who is up for reelection, said, "I certainly want to see money for testing. Testing is essential to the reopening."

Treasury Secretary Steve Mnuchin, White House chief of staff Mark Meadows met with GOP senators at the Capitol on Monday, including Sen. Lamar Alexander of Tennessee, chair of the Health, Education, Labor and Pensions committee, and Rules Committee chair Roy Blunt of Missouri and will meet again on Tuesday in an effort to sort out differences on funding, particularly regarding testing, ahead of the next stimulus bill.

Republican Sen. Richard Shelby of Alabama, who chairs the powerful appropriations committee, told reporters, "We're trying to figure out how to deliver the best thing in this crisis to our schools, our students."

"Schools was a very big component" of discussions, Mnuchin said, adding, there's "a lot of money" for that proposal.

Leaving the meeting with Mnuchin and Meadows, Alexander said he believes "we should fund testing as generously as it needs to be funded."

Meadows told reporters the meeting was "extremely productive," and added that "we're optimistic we'll be able to find enough funding to meet the needs across the board."

Lawmakers have a major feat to pull off as they attempt to put together a new stimulus proposal that can make it across the finish line in a deeply divided Congress and in the midst of an election year.

Democrats and Republicans are already at odds over competing priorities they want to see the bill focus on with no clear way to reconcile major differences.

The pushback from top Republicans to the idea of including a payroll tax cut in the legislation, which Trump has been championing, as well as other White House priorities underscores the extent of divisions that will have to be overcome to pass any legislation, not just between Democrats and Republicans, but within the Republican Party as well. The President has recently said that he would consider not signing the stimulus package if the payroll tax is not included in the package.

McConnell has not yet indicated whether the GOP will include a payroll tax cut in the Republican proposal despite Trump's demands, according to a senator who met with the GOP leader on Monday. McConnell also indicated the GOP has not yet sorted out how to extend jobless benefits to those who are losing $600 a week at week's end.

Asked about the possibility of a payroll tax cut, Cornyn told CNN on Monday, "I think it divides our conference because the Social Security and Medicare trust funds are not exactly on solid ground."

"We need to do something in that space anyway, but cutting the revenues by payroll tax is problematic because eventually you're going to have to raise it anyway and you're just exacerbating the already difficult status that both of those trust funds are in," he said.

Grassley also warned about how the public may perceive such a cut, since enacting such a tax break would have an effect on the Social Security trust fund. Grassley said that even though Congress would replenish the fund, people would think Washington is "raiding it."

"People would think that we're hurting Social Security funds when we're really not," Grassley said, explaining why he thinks it could be a "public relations problem."

At the White House on Monday, Trump reiterated his support for a payroll tax cut during a meeting with Republican leaders.

"It's been proven to be successful," Trump said. "It's a big savings to the people. It's a tremendous saving."

McConnell said he plans to follow the White House meeting with a discussion among members at Tuesday's GOP lunch to "see if we can develop kind of a common approach to this on our side," after which he'll begin to reach out to the Democrats, he said.

In addition to GOP pushback, Democrats are also opposed to the inclusion of a payroll tax cut. But the President has kept championing the idea, telling "Fox News Sunday" when it comes to a stimulus package, "I would consider not signing it if we don't have a payroll tax cut."

Some Senate Republicans have already balked at the enormous price tags associated with the already-enacted stimulus measures, which total in the trillions of dollars, and are reluctant to spend significant amounts of additional money. A payroll tax cut could end up increasing the deficit, a feature of the policy proposal that could make it less likely to win GOP support.

Grassley argued on Monday that a better way to stimulate the economy is through another round of stimulus checks -- rather than passing a law to impose a small cut in American workers' payroll taxes.

"If the purpose of (a payroll tax cut) or a check is to stimulate the economy and help people in need, I think when a person has a check in his hand ... I think that's going to do more economic good than if we dribble out $30 every paycheck," Grassley said in the Capitol. "Because people are going to notice it and maybe take some action as a result."