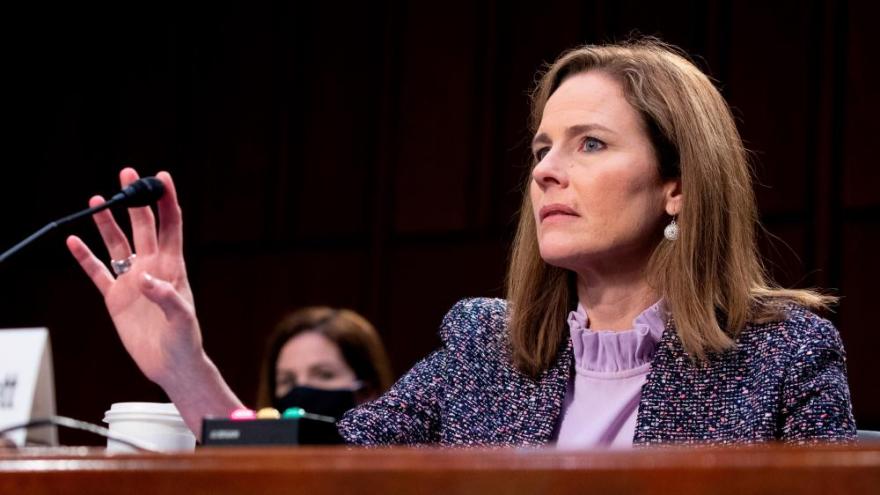 (CNN) -- Senate Republicans are defending Judge Amy Coney Barrett a day before her Senate Judiciary Committee vote against Democratic criticism of her record and a new report from the Associated Press that highlights her previous position on the board of an private Christian school system that the AP reports has anti-LGBTQ policies.

Republicans have signaled that nothing is going to delay the committee's vote on Thursday, which will move Barrett one step closer to becoming the sixth conservative justice on the nine-member Supreme Court, nor the full chamber's vote on her nomination next week.

"The anti-religious bigotry needs to stop. It is an embarrassment to those who propagate it. Fortunately, it will not stop the Senate from voting to confirm this outstanding nominee in just a few days," Senate Majority Leader Mitch McConnell said in a statement on Wednesday.

The comments from McConnell come on the same day as a report from The Associated Press detailing Barrett's involvement with Trinity Schools, Inc., a private anti-LGBTQ Christian school system whose board she served on for nearly three years, according to the report.

The South Carolina Republican's view toward the report was echoed by Sen. John Cornyn, a Texas Republican, who shrugged off Barrett's involvement with the school when asked about it by CNN.

And Republican Sen. John Barrasso of Wyoming, who is in the GOP leadership, dodged a question about whether he's concerned about Barrett's position on the board of Trinity Schools.

"I'm delighted with her nomination, the people of Wyoming are so happy that she's been nominated because she's true to the Constitution," he said.

The AP said in its report that Barrett served on Trinity Schools, Inc.'s board for nearly three years, beginning in 2015. The system, which includes three schools, in Indiana, Minnesota and Virginia, "effectively barred admission to children of same-sex parents and made it plain that openly gay and lesbian teachers weren't welcome in the classroom," according to the AP.

The report said the anti-LGBTQ policies were in place both during and before Barrett's tenure on Trinity's board, and it noted that the private Christian schools are "affiliated" with People of Praise, a Christian group the AP said holds hostile views toward LGBTQ people, according to former members of the group and former students ad employees of Trinity Schools. The AP also reported that at least three of Barrett's seven children have attended the Trinity School in Indiana.

Trinity Schools, Inc., has not returned repeated requests from CNN for comment.

White House deputy press secretary Judd Deere similarly downplayed Barrett's involvement with the school in a statement to CNN, accusing "Democrats and the media" of launching "pathetic personal attacks on her children's Christian school, even though the Supreme Court has repeatedly reaffirmed that religious schools are protected by the First Amendment."

But Senate Minority Leader Chuck Schumer on Wednesday took aim at Barrett for previously sitting on the school system's board, arguing the new report from the AP demonstrates what's at stake for Americans should she be confirmed to the Supreme Court.

"We learned today she served on the board of a school that had policies in place for years discriminating against LGBTQ parents, teachers and their children," Schumer said on a press call, referring to the AP's report.

"The American people should make no mistake: if Judge Barrett becomes Justice Barrett, every single one of our fundamental rights would be at stake," added Schumer.

Schumer reiterated that Democrats will continue to fight against her confirmation "using the limited tools at our disposal."

Democratic Sen. Mazie Hirono of Hawaii stressed that the report is an example of how Democrats are being left in the dark about some information pertaining to Barrett's record amid her fast-tracked confirmation process.

"We don't think that either side ... had enough time to review all of the documents," she said. "So this is yet another instance of information that I believe we should have had."

Barrett hasn't always been quick to disclose things during her confirmation process. CNN reported last week that she sent more documents to the Judiciary Committee after CNN's KFile reported that at least seven public talks had not been included in her questionnaire to the committee.

It was the second time she had updated her questionnaire after KFile reported that she had initially not included multiple public events in her documentation to the committee. Democrats on the committee had attempted to delay her nomination last Thursday, pointing to the KFile reporting.

On Wednesday the NAACP urged that Barrett be further pushed on testimony she gave concerning an opinion she wrote as a judge on the 7th US Circuit Court of Appeals.

Derrick Johnson, president and CEO of the NAACP, said Barrett's testimony about the case was "misleading" because she hadn't provided an accurate account of her own opinion in the case.

The case involved Terry Smith who was a traffic patrolman for a probationary period. His employer, the Illinois Department of Transportation, said that from the first days he had a hard time following directions and demonstrated unsafe conduct. Smith got a series of negative reviews and at the same time filed an internal complaint with the department alleging that his supervisor had used "abusive language" against him. He wrote a letter to his union claiming discrimination based on the fact that he was Black. Other memos followed.

After his termination was already in the works, he claimed that a former supervisor called him a "stupid ass ni[]" after finding out he had filed a complaint with the Equal Employment Opportunity Office.

When he was fired, Smith sought to sue under Title 7 of the Civil Rights Act arguing he had been subject to a hostile work environment and been fired in retaliation for his complaints about racial discrimination.

A district court ruled against him, and Barrett, writing for a unanimous three judge panel of the appeals court, affirmed. Barrett noted that for his hostile work environment claim "the majority of the harassment he identifies was unconnected to his race."

She said the incident where his supervisor called him a "stupid ass ni[]" plainly constituted "race-based harassment." She said the "n-word is an egregious racial epithet."

But Barrett said to move forward he had to demonstrate that the use of the word "altered the conditions of his employment and created a hostile or abusive working environment."

Smith, she wrote, "has no evidence that his supervisors were lashing out at him because he was Black." And that by the time the word was uttered, initial termination proceedings had already begun based on poor performance.

In his statement Johnson argued that the Senate Judiciary Committee should call Barrett back to give a fuller explanation to explain the decision, because she didn't fully explain her reasoning in response to a question from New Jersey Democratic Sen. Cory Booker.

Barrett did provide more explanation in written answers she submitted to the senators.

"On Smith's own account, things had reached a breaking point (and, as the opinion details, for non-race-based reasons) well before his supervisor used the egregious epithet," she wrote.