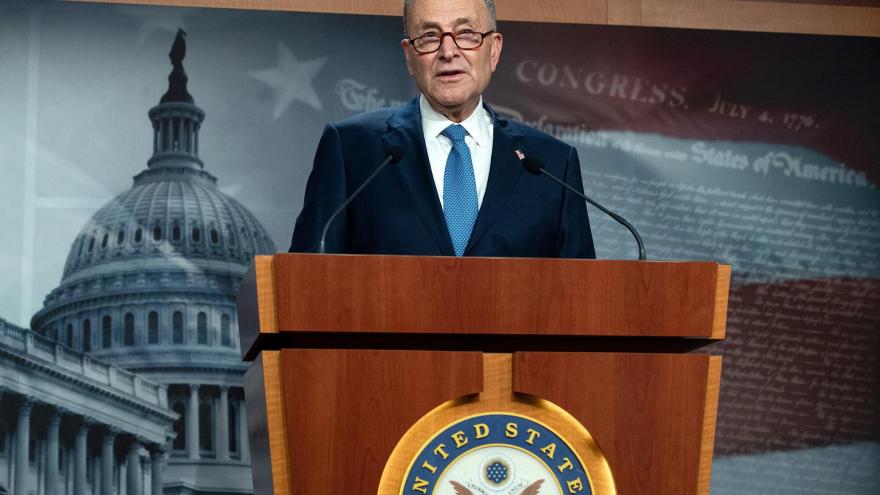 The final vote was 68-32. Independent Sen. Bernie Sanders of Vermont was the only member of the Democratic caucus to vote against the bill. Nineteen Senate Republicans joined Democrats voting for passage.

Passage is a victory for Majority Leader Chuck Schumer, a New York Democrat who co-wrote and strongly backed the measure, and for President Joe Biden, who made reaching across the aisle a central promise of his governing strategy, although he has faced criticism for moving unilaterally on his largest agenda items to this point.

The sweeping legislation -- called the US Innovation and Competition Act -- aims to confront China's influence on multiple fronts and "will supercharge American innovation and preserve our competitive edge for generations to come," Schumer said.

The bill still needs to pass the House before going to Biden's desk. The House Foreign Affairs Chairman Gregory Meeks introduced a corresponding bill in the House last month but it's not clear when that legislation will get a vote.

A final vote on the competition bill was delayed until after the Memorial Day recess to accommodate Republican critics of the bill who insisted on having more floor time to air their concerns. That delay allowed the Senate to vote on whether to advance the January 6 commission legislation, which failed last month after Republicans blocked the bill.

Many top Senate Republicans, including Minority Leader Mitch McConnell, warned for weeks that they would block the legislation unless they got more votes on GOP-backed amendments. Ahead of the bill's passage on Tuesday, McConnell again argued that Schumer closed debate on the bill too soon and the legislation is "incomplete."

Despite this concern, the Kentucky Republican touted the importance of the legislation and said it "touches on key issues that will help determine our strategic footing for decades." He added that "it includes several smart targeted measures, but leaves many more on the table, and so it will advance as an imperfect approach to an extremely consequential challenge."

Schumer has strongly pushed back against GOP criticism and pointed to a long list of amendments to the bill that had been voted on by that point, including 18 Republican amendments and four Democratic amendments.

GOP senators weren't the only ones who wanted to see changes in the bill. Sanders had raised concerns over several provisions, including $10 billion in funds authorized for NASA that would likely benefit Jeff Bezos' space company as well as tens of billions to the US semiconductor industry.

The effort was the product of multiple Senate committees, making it one of the few areas of successful bipartisan cooperation in the Senate. The base of the bill comes from legislation that Schumer and Republican Sen. Todd Young of Indiana introduced together last year, which was called the Endless Frontier Act.

The bill from Schumer and Young, which included investments in a new tech directorate in the National Science Foundation to spur US technology innovation, was rolled up with bipartisan legislation from the Senate Foreign Relations Committee called the Strategic Competition Act. The package the Senate advanced also includes $54 billion in spending to spur the US semiconductor industry, according to a Congressional Budget Office estimate, in order to challenge China's increasing superiority in manufacturing and global supply chains. There are additional investments in cybersecurity and biotechnology, according to a Senate Democratic summary.

Other components of the bill include investing $10 billion over five years to the Department of Commerce to create regional tech hub programs, a third of which would have to be located in rural areas.

The legislation also requires that the iron, steel, manufactured products and construction materials used in federally funded infrastructure projects is produced in the United States. The bill would also codify the Made in America office that Biden created earlier this year by executive order.

White House officials closely monitored -- and were involved in -- the drafting and amendment process of a bill they urged lawmakers to get it to Biden's desk.

The bill serves multiple purposes for the White House, which has sought to ramp up economic capability in the face of a rising and increasingly competitive China.

Perhaps most importantly for Biden, the measure serves as a vehicle for a significant plank on research and development and on manufacturing from his sweeping $4 trillion legislative priorities.

Even before the measure reached the floor, it went through significant changes, attracting many different kinds of policy provisions as one of the few pieces of legislation likely to actually get signed into law this year.

When the Senate Commerce, Science and Transportation Committee debated and amended the Endless Frontier Act, many items were added, including a provision dealing with country of origin labeling for king crab and another to ban the transport, sale or purchase of shark fins. The committee added the NASA Authorization Act to the legislation, along with a $10 billion authorization for NASA's Artemis lunar lander program likely to benefit Blue Origin, a company owned by Amazon's Bezos that's based in the home state of Senate Commerce Chair Maria Cantwell, a Washington Democrat.

Young disapproved of a move in the committee to divert funding from the National Science Foundation for the tech directorate to the Department of Energy's National Laboratories -- pushed by senators with national labs in their states -- but he supported the measure anyway.

Once the legislation reached the floor, many more amendments were added, with votes occurring late into the evening. The Senate approved several amendments from Republicans by voice vote on Tuesday, including one from Sen. Rand Paul of Kentucky to ban the National Institutes of Health from funding "gain-of-function" research in China, an amendment from Iowa Sen. Joni Ernst blocking any federal funding for the Wuhan Institute of Virology and an intellectual property provision from Montana Sen. Steve Daines.