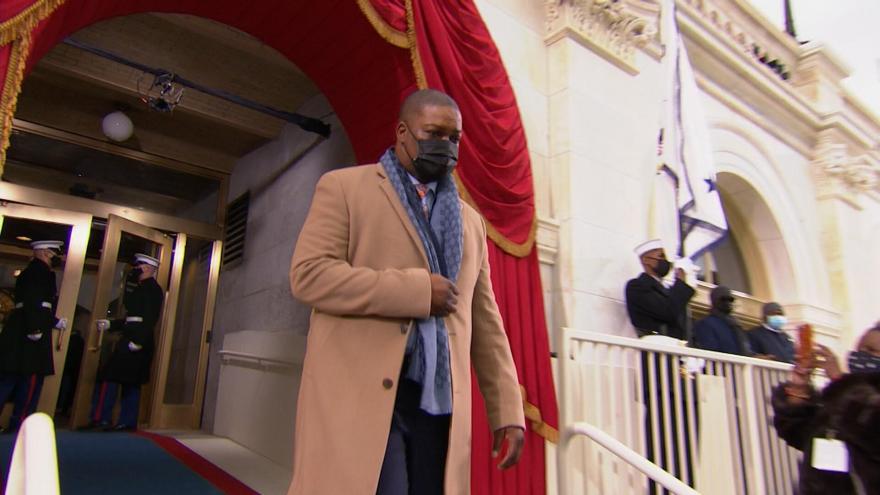 (CNN) -- The Senate on Friday approved legislation to award a Congressional Gold Medal to Capitol Police Officer Eugene Goodman, who became a national hero for his actions defending the Senate during the siege of the Capitol on January 6.

Senate Majority Leader Chuck Schumer paid tribute on the Senate floor to Goodman Friday evening and announced that he would ask the Senate to pass legislation to award him the honor. It passed by unanimous consent.

"In the weeks after the attack on January the sixth, the world learned about the incredible bravery of Officer Goodman on that fateful day," Schumer said. Senators stood to applaud Goodman, who was in the chamber as Schumer spoke.

"I think we can all agree that Eugene Goodman deserves the highest honor Congress can bestow," Schumer said.

Senate Minority Leader Mitch McConnell said he was "pleased to join the majority leader's request," and said that January 6 "introduced our nation to a group of heroes whom we in Congress were already proud to call our colleagues and to whom we owe a great debt." He added, "If not for the quick thinking and bravery of Officer Eugene Goodman in particular, people in this chamber may not have escaped that day unharmed."

Goodman, now the acting deputy Senate sergeant-at-arms, was first hailed as a hero after video emerged of him guiding the violent mob away from the Senate chamber, where then-Vice President Mike Pence had been conducting the ceremonial counting of the 2020 electoral votes, on January 6.

The passage of the legislation marks a rare bright spot of bipartisanship amid the ongoing impeachment trial of former President Donald Trump.

New security footage presented during the trial showed brought even more heroic action Goodman to light, including the fact that he potentially saved Sen. Mitt Romney, a Utah Republican and frequent Trump critic, from the violent mob that breached the US Capitol.

"Here in this trial we saw new video, powerful video showing calmness under pressure, his courage in the line of duty, his foresight in the midst of chaos and his willingness to make himself a target of the mob's rage so that others might reach safety," Schumer said.

House Speaker Nancy Pelosi introduced legislation on Thursday to grant the Congressional Gold Medal to US Capitol Police officers and law enforcement personnel who protected the Capitol during the violent insurrection.