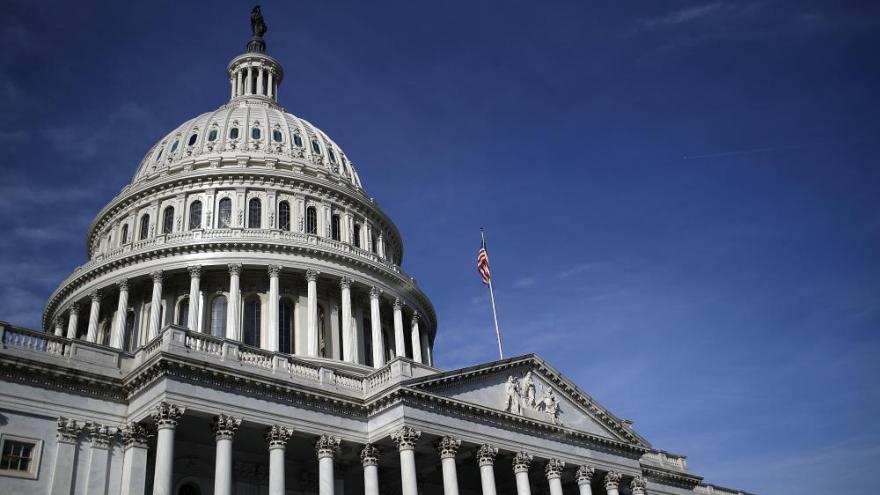 The Senate passed a budget resolution early Friday morning -- a key procedural step that sets up the ability for Democrats to pass President Joe Biden's sweeping Covid-19 relief package without the threat of a filibuster from Republicans who oppose it.

(CNN) -- Both chambers of Congress have now passed a budget resolution, a key procedural step that sets up the ability for Democrats to pass President Joe Biden's sweeping $1.9 trillion Covid-19 relief package without the threat of a filibuster from Republicans who oppose it.

Passage in the Senate followed hours of voting on amendments in an exhausting ritual known as a "vote-a-rama," when senators can theoretically offer as many amendments to the budget resolution as they desire.

Those amendments largely serve as a way for each party to force the other side on the record about controversial issues, and most of the GOP amendments were defeated.

But the process also highlighted some bipartisan consensus. One of the more significant amendments came from a bipartisan group of senators, led by Democratic Sen. Joe Manchin of West Virginia and Republican Sen. Susan Collins of Maine, that would prevent "upper income taxpayers" from being eligible to receive $1,400 Covid relief checks. While the amendment was adopted 99-1, it is not binding and does not mean that the eligibility requirements will be changed in the final Covid relief bill. But it expresses broad consensus to make the changes.

On one closely watched issue, Republican Sen. Joni Ernst of Iowa offered an amendment to prevent a hike in the minimum wage to $15 an hour during a pandemic. Democrats want to include a $15 minimum wage in the Covid relief bill, but her measure could have been complicated for centrist members -- like Manchin, who has a different position than most of his caucus and supports a more modest increase in the minimum wage.

But before a roll call vote was called, Sen. Bernie Sanders, the Vermont Independent who is the chair of the Budget Committee and a champion of the $15 minimum wage, intervened and said his proposal would actually make the jump to $15 over five years, not right away as Ernst had formulated in her amendment. With that, her amendment was quickly adopted by unanimous consent.

An amendment by Republican Sen. Tom Cotton of Arkansas in opposition to expanding the Supreme Court, the so-called practice of court packing that is advocated by some progressives to offset the conservative majority of the court, was defeated on a 50-50 vote.

The budget resolution that passed is not the Covid relief bill. It simply sets the stage for Democrats to be able to use a process known as "budget reconciliation" to pass the relief bill on a party-line vote, possibly in late February or March, after the impeachment trial of former President Donald Trump is complete in the Senate.

Embedded in the budget resolution are reconciliation instructions for multiple congressional committees to formally draft and approve legislation on things like funds for vaccine production and distribution, unemployment insurance, stimulus checks and more.

The House already passed the budget measure earlier in the week. But because it was amended in the Senate, the House had to revote on it Friday.

House Speaker Nancy Pelosi said Friday that next week, they will begin working on the specifics of the bill, and predicted that the House will send a bill to the Senate "hopefully in a two week period of time," so that "this will be done long before the due date" of the expiration of unemployment insurance in March.

Biden has said he is willing to go forward without the support of Republicans, but he's also stressed that he's willing to make certain concessions if it will earn bipartisan support.

A Biden aide told CNN Friday the Senate's passage of the resolution is a "positive step forward" and that the White House is "looking forward to continued progress to getting assistance to the American people."

Congressional Democrats have also made clear that they think time is of the essence on the proposal, and a deep divergence remains between Biden's $1.9 trillion and the $618 billion GOP proposal.

The counterproposal still includes $160 billion to battle the pandemic, but Republican senators want to send smaller, more targeted relief checks and only extend unemployment benefits through June, not September.

White House press secretary Jen Psaki reiterated during a briefing this week there are certain "bottom lines" that Biden wants to be in the next round of Covid-19 relief, including direct payments reaching more Americans than what the Republican proposal would include.

"His view is that at this point in our country, when 1-in-7 American families don't have enough food to eat, we need to make sure people get the relief they need and are not left behind," Psaki said, adding that the administration views the risk "is not going too big, it is going too small."

Reconciliation has been used many times by both parties to pass controversial legislation over the objections of the minority party, including then-President Barack Obama's Affordable Care Act in 2010 and Trump's sweeping tax cuts in 2017.

Republicans are unhappy Democrats are resorting to the aggressive tactic, though, arguing it will set a partisan tone for the rest of Biden's presidency and that he's not operating as the political unifier he pledged to be.

The 10 Senate Republicans who met with the President to discuss his relief package are pushing for talks to continue, sending a letter to the White House Thursday that was obtained by CNN.

"We remain committed to working in a bipartisan fashion and hope that you will take into account our views as the legislative process moves forward," the group, led by Maine Sen. Susan Collins, said.