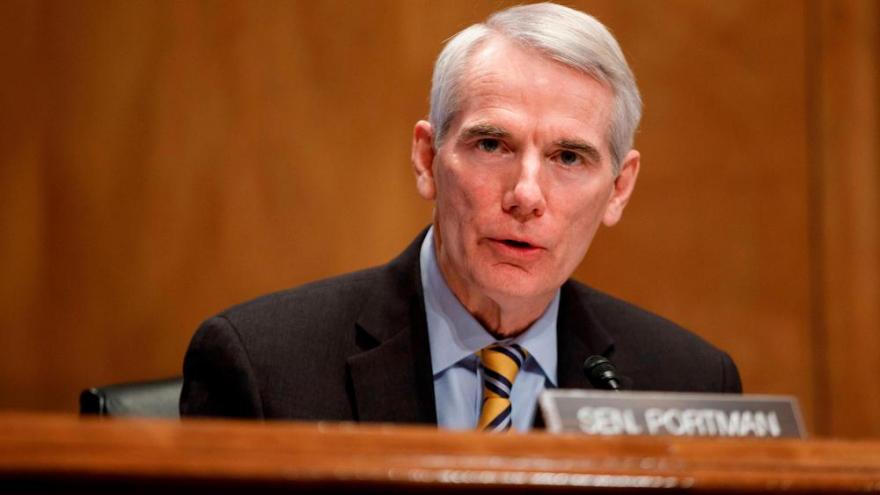 Sen. Rob Portman of Ohio (pictured here) and White House aide Steve Ricchetti are among negotiators on a final agreement.

(CNN) -- The Senate voted Wednesday to begin debate on a roughly $1 trillion infrastructure bill after weeks of negotiating, advancing a critical part of President Joe Biden's agenda in Congress. The vote was 67-32.

Over half of the bill — $550 billion — is new federal funding. It invests $73 billion to rebuild the electric grid, $66 billion in passenger and freight rail, $65 billion to expand broadband Internet access, $55 billion for water infrastructure, $40 billion to fix bridges, $39 billion to modernize public transit like buses and $7.5 billion to create the first federal network of charging stations for electric vehicles.

The White House claimed that the bill's investments in various areas of US infrastructure were either the largest ever or in several decades.

"We are proud to announce we have reached a bipartisan agreement on our proposal to make the strongest investment in America's critical infrastructure in a generation," said 21 senators from both parties in a statement. "Our plan will create good-paying jobs in communities across our country without raising taxes."

"Reaching this agreement was no easy task — but our constituents expect us to put in the hard work and show that two parties can still work together to address the needs of the American people," they added.

Just a week ago, Republicans rejected a procedural vote set up by Senate Democratic leader Chuck Schumer, who wanted to prod the negotiations. In the days since then, a clear message was delivered to negotiators from the White House: The President has no plans to walk away from the talks.

It was an important element of negotiations that publicly appeared to swerve between on the brink of a deal to on the brink of failure depending on the day -- or hour. But behind the scenes at the White House, there was a clear mandate to keep pressing forward.

For Biden, it meant multiple briefings a day from his team, regular calls and one in-person meeting with Sinema, the lead Democratic negotiator, in an effort to ensure the coalition stayed together, according to a White House official. The negotiations became the subject of daily senior staff meetings inside the West Wing.

After a back-and-forth over who was to blame for the lack of a final agreement began at the start of the week, White House officials took pains not to get involved, two other officials said.

Ron Klain, the White House chief of staff, was on the phone with Schumer multiple times a day, ramping up the tempo, as Democrats on both sides of Pennsylvania Avenue attempted to balance giving the group space to reach a deal while also keeping pressure on it to move quickly.

Steve Ricchetti, counselor to the President and one of Biden's closest advisers, established a close working relationship with Portman, the lead GOP negotiator who played a central role in narrowing an array of final differences. The two native Ohioans, both of whom viewed the other as a straight shooter, the people said, spent hours behind closed doors on Tuesday night, culminating a seemingly endless series of in-person meetings, Zoom meetings and calls that transpired between members of the bipartisan group and the White House over the last several weeks.

As Ricchetti met with Portman, Commerce Sec. Gina Raimondo, who has become a key White House liaison to several senators, had dinner with Schumer and Warner, the Virginia Democrat who served as a central player in the bipartisan group. She also stayed in constant communication with Collins, the Maine Republican, over broadband provisions that remained a key sticking point, the official said.

While the bipartisan group had a breakthrough on Wednesday, some progressives on the left criticized it after Sinema announced she would not support another, much larger, $3.5 trillion bill at that massive top-line figure. The other, Democratic bill is another crucial part of Biden's legislative agenda; it would fund climate initiatives, universal prekindergarten and community colleges, expand paid family and medical leave and the child tax credit, and add dental, vision and hearing benefits to Medicare, among many other proposals.

"Good luck tanking your own party's investment on childcare, climate action, and infrastructure while presuming you'll survive a 3 vote House margin - especially after choosing to exclude members of color from negotiations and calling that a 'bipartisan accomplishment,'" Ocasio-Cortez tweeted.