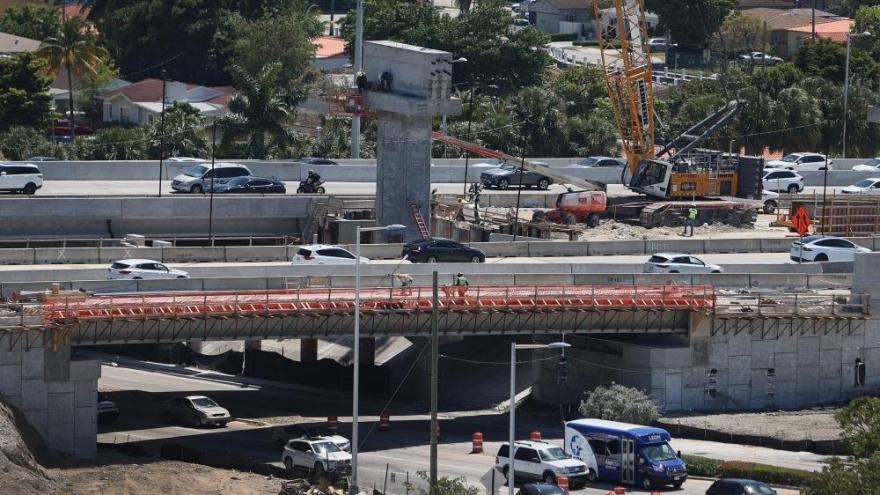 Construction workers build the "Signature Bridge," replacing and improving a busy highway intersection at I-95 and I-395 on April 13 in Miami, Florida.

(CNN) -- The Senate voted to cut off debate on the massive $1.2 trillion infrastructure package Sunday night, a last hurdle before voting on final passage of the bipartisan bill, likely early Tuesday.

Sixty-eight senators voted to invoke cloture Sunday night, including 18 Republicans, clearing one last obstacle for President Joe Biden's agenda even as it will soon face an uncertain future in the House.

The final Senate vote is now expected sometime in the early hours of Tuesday morning, after 30 hours of post cloture time expires.

Senators are confident the bill will pass, but backers of the bill got mixed news Sunday evening. Republican Sen. Todd Young, who initially endorsed the bipartisan deal and had previously voted to cut off debate, announced he will vote against the bill. The Indiana Republican, who faces reelection next year, pointed to the Congressional Budget Office's scoring of the legislation and said he is not "comfortable with a number of the Democratic priorities contained in this version."

Backers of the bill did pick up support from GOP Sen. Roger Wicker, however, who had previously blocked the bill from advancing. The Mississippi Republican announced on the floor Sunday that he would support it.

The massive bipartisan infrastructure package, called the Infrastructure Investment and Jobs Act, is the culmination of drawn-out and painstaking negotiations between a bipartisan group of senators and the Biden administration and will allow both parties to claim a win after extensive work across the aisle.

It features $550 billion in new federal spending over five years. The measure invests $110 billion in funding toward roads, bridges and major projects, $66 billion in passenger and freight rail, $65 billion to rebuild the electric grid, $65 billion to expand broadband Internet access, and $39 billion to modernize and expand transit systems. Among many other priorities, the bill also includes $55 billion for water infrastructure, $15 billion of which will be directed toward replacing lead pipes.

Sunday's vote came after a rare weekend of Senate action. "We've been working hard all day on amendments and hopefully we can come to some agreement tomorrow," Senate Majority Leader Chuck Schumer said on the floor Saturday. By early Sunday, after days of negotiations, Republicans and Democrats still had not reached a deal on additional amendment votes to the bill, which could have sped up its final passage.

"Democrats are ready and willing to vote on additional amendments to the bill before moving to final passage. Once again, that will require the cooperation of our Republican colleagues. I hope they will cooperate so we can move more quickly. Otherwise, we'll proceed by the book, and finish the bill," the New York Democrat said on the Senate floor as the chamber began a rare Sunday session.

On Saturday, 18 GOP senators had joined Democrats to shut down debate on the bill.

Earlier Saturday, freshman Sen. Bill Hagerty's spokesperson Judd Deere had made clear that the Tennessee Republican would not consent to speed up passage of the bill. An agreement to tee up additional amendment votes or speed up final passage requires all 100 senators to sign off, which meant final passage of the bipartisan bill was likely until Monday night or Tuesday morning.

"He will not consent to accelerate this package that adds to the deficit. The Senator is not objecting to votes on amendments, but the body should follow regular order as it works to complete this legislation," Deere said.

Senators held votes on 22 amendments throughout the week after working the previous weekend to finalize the legislative text.

After Hagerty indicated he would block the bill's expeditious passage Saturday, a large group of his Republican colleagues were seen surrounding him on the Senate floor. Sens. Lisa Murkowski, Rob Portman and Thune and Senate Minority Leader Mitch McConnell's floor staff all spent several minutes huddling with the junior senator from Tennessee, who told reporters before going to the floor that he wasn't blocking the passage and was merely letting the regular process play out.

When Hagerty said he wasn't blocking anything, Democratic Sen. Chris Coons of Delaware softly responded next to him, "Yes you are."