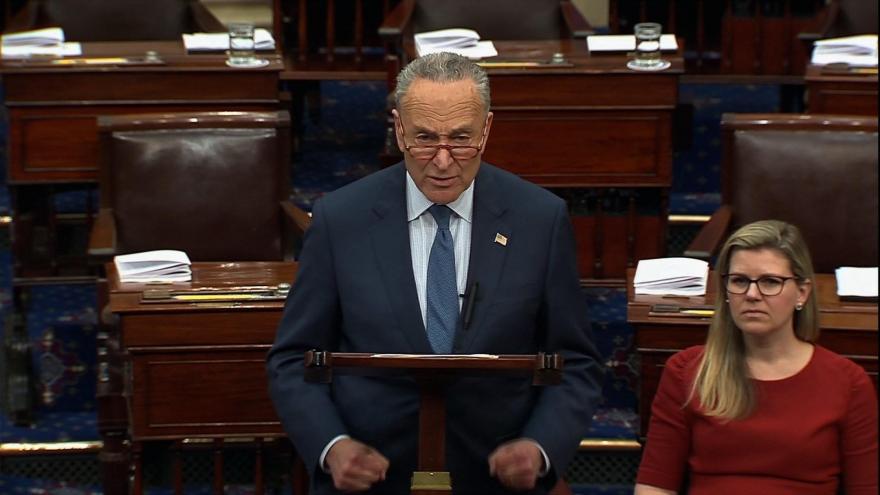 Jay Sekulow is one the lawyers leading President Trump's legal team in the senate impeachment trial.

(CNN) -- The Senate early Wednesday morning approved rules for the Senate impeachment trial of President Donald Trump on a party-line vote that delays the question of whether the Senate should subpoena witnesses and documents until later in the trial.

The rules resolution from Senate Majority Mitch McConnell was approved 53-47 after Republicans defeated a series of amendments from Senate Minority Leader Chuck Schumer on the opening day of the bitterly fought impeachment trial. Schumer proposed 11 amendments seeking to subpoena a trove of documents from the Trump administration and witnesses like acting White House chief of staff Mick Mulvaney and former national security adviser John Bolton, but the amendments were thwarted almost entirely by the same party-line vote, 53-47.

As the debate continued into the early hours of Wednesday morning, tempers increasingly began to flare. Chief Justice John Roberts admonished both the House managers and the President's lawyers after a particularly heated back and forth with House Judiciary Chairman Jerry Nadler, White House counsel Pat Cipollone and Trump lawyer Jay Sekulow. Roberts said he was admonishing the two sides "in equal terms to remember that they are addressing the world's greatest deliberative body."

Schumer's amendments are part of an effort from Democrats in both the House and Senate to attack the resolution laying out the rules of the trial, which puts off a decision about seeking witnesses and documents until after opening statements are given and senators have a chance to ask questions of the House impeachment managers and the President's legal team.

The debate over the trial rules played out after Senate Majority Leader Mitch McConnell decided to alter the trial resolution shortly before it gaveled in Tuesday, amid concerns from key Senate Republicans and an uproar from Democrats.

The new resolution will give the House impeachment managers and the President's team three days each to make their 24 hours of trial arguments, instead of two as McConnell had initially proposed. There were also changes to the section of the resolution that would not have admitted the House's evidence without a vote — now, evidence will be admitted automatically unless there is a motion from the President's team to throw out evidence.

But the changes did little to satisfy Democrats in either chamber, who have accused McConnell and Senate Republicans of working with the President to rush through the impeachment trial.

Democrats erupted when McConnell's four-page organizing resolution was released Monday night, dividing 24 hours over two days for opening arguments, delaying the question of witnesses until after the arguments were completed and requiring a vote for the House evidence to be submitted. Despite the changes, Democrats on Tuesday pushed for the Senate to obtain documents and witness testimony at the outset.

"If the Senate votes to deprive itself of witnesses and documents, the opening statements will be the end of the trial," House Intelligence Chairman Adam Schiff, the lead impeachment manager and a California Democrat, said during the trial debate Tuesday, "So to say, 'Let's just have the opening statements and then we'll see,' means let's have the trial, and maybe we can just sweep this all under the rug."

Two GOP aides said the changes McConnell made were the result of concerns from moderate Republicans. The alterations were hand-written into the resolution — a sign they were hastily put together before the trial began early Tuesday afternoon.

Republican Sen. Susan Collins of Maine and other colleagues "raised concerns about the 24 hours of opening statements in two days and the admission of the House transcript is the record," Annie Clark, a Collins spokeswoman, told CNN. "Her position has been that the trial should follow the Clinton model as much as possible. She thinks these changes are a significant improvement."

Collins did break with Republicans on one amendment vote, joining with Democrats on the 10th amendment to allow the sides 24 hours to respond to the trial motions that are due Wednesday morning. It failed 52-48.

The move is a sign of how closely McConnell, who cannot afford to lose more than four GOP senators to keep control of the trial, is keeping the pulse of the moderates in his conference.

Schumer's amendments sought subpoenas for a host of documents related to Ukraine, including those tied to the President's calls with Ukrainian President Volodymyr Zelensky, discussion of investigations related to the Bidens and Burisma, and the freezing of US security assistance to Ukraine. The amendments included calls to subpoena the White House, National Security Council, State Department and OMB for documents.

But McConnell said on the Senate floor before the trial began that he has the votes from Republicans to move forward. McConnell said his proposal tracked closely with President Bill Clinton's 1999 impeachment trial that was "fair, even-handed and tracks closely with past precedents."

"We believe that once you hear those initial presentations, the only conclusion will be that the President has done absolutely nothing wrong," Cipollone said. "And that these articles of impeachment do not begin to approach the standard required by the Constitution."

Trump is in Davos, Switzerland, for the Davos World Economic Forum, but he still weighed in on Twitter when the trial started. "READ THE TRANSCRIPTS!" he wrote.

In an interview with CNBC while in Davos, Trump said he watched "some" of the impeachment trial and thought his team's performance during the first day of the trial was "really good." He again defended himself, saying his conversation with Zelensky was "perfect."

Tuesday's session was the first substantive day in the Senate trial after the House impeached Trump last month for abuse of power and obstruction of Congress. House Democrats charge that the President abused his office by withholding US security aid and a White House meeting while pressuring Ukraine to investigate his political rivals, and then covered it up by obstructing the impeachment inquiry.

"The misconduct set out in those articles is the most serious ever charged against a president," Schiff said. "When the founders wrote the impeachment clause, they had precisely this type of conduct in mind, conduct that abuses the power of office for a personal benefit, that undermines our national security, and that invites foreign interference in the democratic process of an election."

The President's lawyers pushed back against the House, charging that the House's impeachment inquiry failed to give the President due process and the House failed to actually follow through on its subpoenas in court after the White House challenged them. The President's legal team largely focused on the process issues in the debate for more witnesses and documents.

"If I showed up in any court in this country and I said, 'Judge, my case is overwhelming, but I'm not ready to go yet. I need more evidence' ... I would get thrown out in two seconds," Cipollone said. "And that's exactly what should happen here."

The managers and the President's team each received an hour to debate each amendment, with several speaking at the lectern in the well of the Senate. Schiff and Cipollone used the time to push back on charges the other side was making, jumping in before or after the designated speaker who gave the bulk of the argument.

As the hours of debate dragged into the evening Tuesday, senators settled into their role in the trial as silent jurors, prohibited from speaking during the debates on amendments they would vote on.

Some senators took notes and listened attentively, while others slunk back in their chairs as the House managers and President's team took turns arguing the trial rules. Side conversations appeared to grow from fleeting whispers to quiet conversations, some even leading to laughs — despite the rules threatening senators with "pain of imprisonment" for speaking.

Sen. Tom Cotton, an Arkansas Republican, absent-mindedly clicked his retractable pen for about a minute, before GOP Sen. Joni Ernst of Iowa turned to look at him and he stopped. Sens. Tim Scott of South Carolina and Ben Sasse of Nebraska dug into Sasse's stash of jaw breakers, while whispering to each other and trading notes. At one point, Republican Sen. Bill Cassidy of Louisiana stopped in his note taking to pass a note to Sasse, who added something to it and passed it on to Scott.

Sen. Chris Murphy, a Connecticut Democrat, said it was up to Schumer how many amendments would be offered — and how late into the night Tuesday's debate would go. But he argued it was necessary because it could be Democrats' only chance to force votes on witnesses and documents.

"We need to put Republicans on record," Murphy said. "We may not have another chance to offer amendments to get witnesses and documents before the Senate."

Since the House passed the two articles of impeachment last month, McConnell has said he would follow the precedent of Clinton's 1999 impeachment trial. McConnell has pointed to the fact that the Senate put off the question of witnesses until later in the trial, after opening arguments and the senators' period for asking questions had concluded. At that point, three witnesses were deposed, and portions of those depositions were played in the Senate chamber.

McConnell's resolution similarly puts the question of witnesses until after each side has 24 hours for their opening arguments — split over three days now, instead of two — and 16 hours of Senate questions. At that point, the Senate will vote generally on whether it should seek witnesses and documents, and then it will consider individual witnesses.

Democrats have also pointed to other divergences from Clinton as a sign McConnell is trying to rush the trial. The Clinton trial still provided four days per side for opening arguments, though splitting it up over three days means it's unlikely the sessions will stretch beyond midnight as initially expected.

Schiff on Tuesday cited the documents Democrats are seeking from the Trump administration as the most important pieces of evidence to still obtain.

"If we're truly interested in fair trial, the first step ought to be the production of the documents," Schiff said. "Those will reveal precisely who the most important witnesses are."