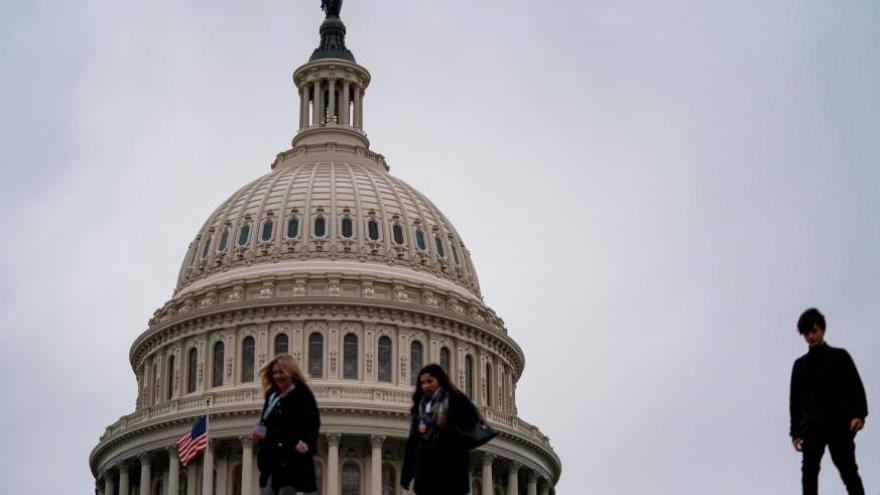 The Senate is bracing for a marathon effort and a late night of voting on amendments before lawmakers take a final vote on President Joe Biden's $1.9 trillion pandemic relief bill -- it's just not yet clear exactly when that will take place.

(CNN) -- The Senate is now engaged in a marathon effort to take up President Joe Biden's $1.9 trillion pandemic relief bill, a process that could stretch into the weekend before a final vote in the chamber takes place.

The chamber voted Thursday afternoon to open debate on the legislation. But Republican opposition is expected to draw out the timeline for considering the bill, which has undergone several major changes while in the Senate, before it is sent back to the House for final approval and then to the President for his signature. That starts with forcing the 628-page bill to be read out loud before 20 hours of debate can begin in earnest.

LIVE UPDATES: The latest on the Covid-19 stimulus bill

In a sign of just how thin Democrats' majority is, Vice President Kamala Harris broke the 50-50 tie advancing the bill.

Democrats say the legislation is urgently needed to address the continued devastation of the pandemic. Republicans however have denounced the bill as a partisan measure jam-packed with liberal priorities. And they're signaling they won't let it advance to a final vote without putting up a fight and dragging out the process.

A Senate clerk started reading the bill out loud around 3:20 p.m. ET and it is expected to take around 10 hours. In addition to forcing a full reading of the bill, Republican Sen. Ron Johnson of Wisconsin has indicated he could take steps to stretch out the timeline for considering the legislation and any amendments offered to it.

Senate Majority Leader Chuck Schumer called out Johnson in a floor speech Thursday, saying, "We all know this will merely delay the inevitable."

"It will accomplish little more than a few sore throats for the Senate clerks who work very hard day in day out to help the Senate function," he said.

Schumer vowed that "no matter how long it takes, the Senate is going to stay in session to finish the bill this week. The American people deserve nothing less."

All eyes on Murkowski

In a notable move, Alaska GOP Sen. Lisa Murkowski, who has said she has not decided how she'll vote on the relief package, voted against proceeding to the bill.

Senate Minority Whip John Thune, a South Dakota Republican, said earlier Thursday that he didn't know how Murkowski, who is up for reelection next year, will vote on the bill, but that he was "hopeful" she'll stick with Republicans in opposing it.

The Alaska senator is being closely watched as a possible swing vote on the legislation, which Republicans are working to put up a united front against.

Murkowski indicated Thursday she is still weighing whether or not to vote in favor of the bill even though she voted against the procedural motion to begin debate on it.

When asked by a reporter about her earlier vote, the senator said she had not yet seen the just-released Senate version of the measure and is still working off the House-passed bill, aspects of which she criticized as "not very beneficial to a state like Alaska that has high revenue loss, low population, and therefore our numbers of unemployed aren't that impressive."

"I'm going to see what's in it. We already know there are some things in it that are clearly not Covid-related, but I'm looking at some of the things that will provide a level of relief for a state like Alaska." she said. "So, trying to make a bad bill work better."

She added she is particularly interested in how the state and local funding in the House bill was changed in the Senate measure and is focused on helping the tourist and seafood sectors in her state, which could be targeted in the amendments she offers to the bill.

Vote-a-rama on the horizon

At some point, the Senate is expected to then move into a vote-a-rama, a tradition in the chamber that typically involves a large number of votes on amendments that can stretch for hours and last until late in the night. It is frequently used by lawmakers to force tough votes that put members of the opposing party on the record on controversial issues.

Senate Majority Whip Dick Durbin said of the process, "Members start with a great number of amendments and great resolve and eventually it dwindles down to a handful of amendments and no resolve. People just want to get out of here."

The Illinois Democrat added, "It does not serve the purpose of debate on public policy. It is an endurance contest and a gotcha contest, and I think the Senate should rise to a higher level."

Republican Sen. Mike Braun of Indiana suggested that Republicans plan to use time attempting to spotlight elements of the bill they disagree with. "There is so much in this bill that needs to be discussed," he said. "My feeling is that we are going to be investing some time in pointing out what we don't like about it."

Tweaks to the bill put Democratic unity to the test

When it happens, tough votes on amendments will serve as a unity test for Senate Democrats.

In one of the latest developments related to the legislation, Biden agreed to a compromise with moderate Democrats to narrow the income eligibility for the next round of $1,400 stimulus checks included in the Senate bill, a Democratic source told CNN on Wednesday.

The change has frustrated progressives, however. Congressional Progressive Caucus Chair Pramila Jayapal, a Democratic congresswoman from Washington state, told reporters Wednesday that she needs to look more specifically at what changes the Senate is making to the package. "I don't like that this is being narrowed. I feel like the survival checks are the easiest, simplest, most popular, populist proposal."

She added that she's "looking to see what the whole package looks like."

With an evenly divided Senate, where Vice President Kamala Harris is the tiebreaker, Senate Democrats have no margin for error. The narrow House Democratic majority also leaves little room to maneuver.

Once the Senate passes its version of the bill, it would need to be approved once again by the House before heading to the President's desk for his signature.