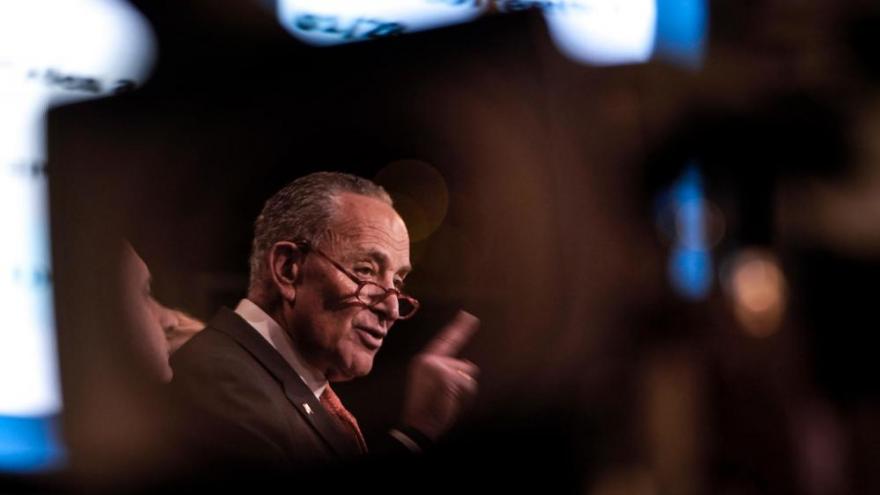 Democrats are signaling Tuesday they are poised to block a GOP-led policing reform bill later this week when Republicans plan to hold a procedural vote. In a new letter to Majority Leader Mitch McConnell, Sen. Chuck Schumer, a Democrat from New York, writes that the GOP bill is "not salvageable," and Democrats are demanding a bipartisan negotiation ahead of a floor vote.

(CNN) -- Senate Democrats are on track block a GOP-led policing reform bill later this week when Republicans are slated to hold a procedural vote, the latest sign of an impasse on Capitol Hill over the issue.

In a new letter to Majority Leader Mitch McConnell, Sen. Chuck Schumer, a Democrat from New York, writes that the GOP bill is "not salvageable," and Democrats are demanding a bipartisan negotiation ahead of a floor vote.

"We will not meet this moment by holding a floor vote on the JUSTICE Act, nor can we simply amend this bill, which is so threadbare and lacking in substance that it does not even provide a proper baseline for negotiations. This bill is not salvageable and we need bipartisan talks to get to a constructive starting point," the letter reads.

Republicans need at least seven Democrats in order to break a filibuster and advance the legislation, but the letter and comments from Schumer, who leads the Democrats in the chamber, were the latest sign that GOP leaders are not on track to win over enough members from across the aisle.

Schumer sent Tuesday's letter with Democratic Sens. Cory Booker of New Jersey and Kamala Harris of California. Both senators have their own Democratic policing legislation they sponsored.

"The Senate is uniquely positioned to lead when it comes to reforming and reimagining policing in this country. If we are to do so -- we cannot start with a floor vote on the JUSTICE Act. Instead we must begin by considering real and meaningful reforms, such as those found in the Justice in Policing Act, a bicameral bill," the letter says.

Schumer said on the Senate floor Tuesday that "no bill will pass" on policing reform "as a result of this ploy by Sen. McConnell. The Republican majority has given the Senate a bad bill and proposed no credible way to sufficiently improve it." He added that McConnell "has created a cul-de-sac from which no legislation can emerge."

There are sweeping disagreements between the Republican and Democratic bills. Republican Sen. Tim Scott's bill does not include a federal ban on chokeholds. There is also disagreement on whether to reform protections like qualified immunity, which keeps individuals from suing police in civil court for actions they take in the course of their duty. Republicans have largely wanted to avoid tackling the issue in a messy floor debate, while Democrats included a major overhaul of qualified immunity in their bill. Finding middle ground on the issue may take weeks, not days.

On the issue of qualified immunity, Republican Sen. Mike Braun of Indiana said Tuesday he will propose a bill aiming to find a middle ground.

"Without any direction from Congress, our judicial branch has unilaterally created and defined qualified immunity," Braun said in a statement accompanying his legislation. "It's time Congress does their job to establish a qualified immunity law that defends law enforcement, while protecting the rights of the people."

An aide to Scott, who is the sole Black Republican senator, told CNN that on Tuesday at the Senate GOP lunch the senator played for his GOP colleagues hateful and racist voicemails his office has received in recent days. One Republican senator suggested he increase his own personal security.

Scott told The New York Times that the hateful and racist messages have become more intense in recent days.

"It's interesting that we are on the right side of the police reform conversation, yet we're on the wrong side according to the people, based on the way that we are characterized in the national press," Scott told the Times.

Booker and Harris, who are the two Black members of the Senate Democratic caucus, both slammed the GOP bill on Tuesday. Booker said the bill "does not in any way even serve as a starting point, or even a baseline for negotiations." Harris echoed Booker's remarks, and said we cannot answer Americans' demands with "this Republican attempt to obstruct real progress and real justice."