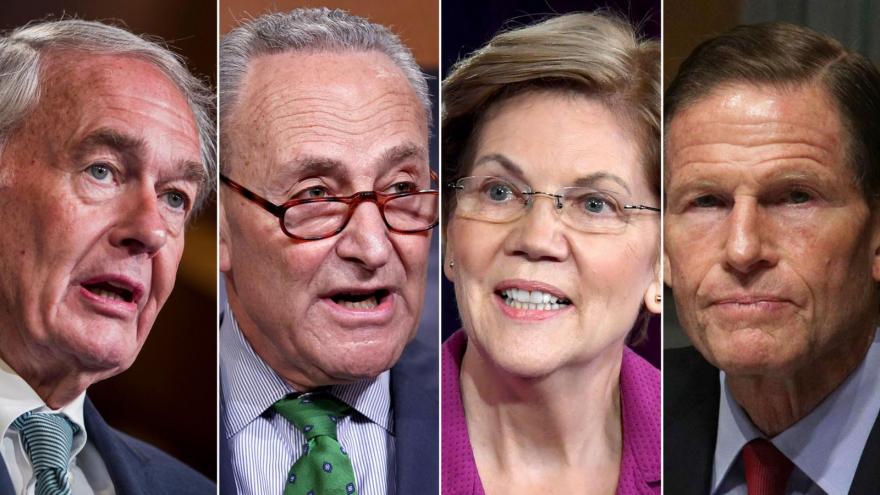 Senators Chuck Schumer, Richard Blumenthal, Ed Markey and Elizabeth Warren. The Senate Democrats are asking the Health and Human Services Department watchdog to investigate President Donald Trump's recent assertion that he asked his staff to "slow the testing down" for coronavirus.

(CNN) -- Senate Democrats are asking the Health and Human Services Department watchdog to investigate President Donald Trump's recent assertion that he asked his staff to "slow the testing down" for coronavirus.

Senate Minority Leader Chuck Schumer of New York, Sens. Elizabeth Warren and Ed Markey of Massachusetts and Sen. Richard Blumenthal of Connecticut sent a letter to the department's acting inspector general Monday asking to review all coronavirus testing funding streams and programs "to determine whether any programs have been 'slowed down' at the request of President Trump."

While Congress has passed bipartisan legislation expanding coronavirus testing, they wrote, "it appears, however, that President Trump does not support federal efforts to expand access to COVID-19 tests and has undermined efforts to increase testing."

Tesia Williams, communications director for HHS' Office of the Inspector General, told CNN Tuesday that they had "received and are reviewing the letter for appropriate action."

"When you do testing to that extent, you are gonna find more people, you're gonna find more cases," Trump said. "So I said to my people, 'Slow the testing down please.' They test and they test. We have tests that people don't know what's going on."

The four senators said that with Trump's "abhorrent" comment, "the President implies that he cares more about superficially minimizing the threat of COVID-19 than about stopping a virus that has killed nearly 120,000 of our nation's people, and that he has sought to undermine efforts to increase testing that are necessary to identify and slow viral outbreaks."

After Trump made the comment, his officials came to the President's defense. White House trade adviser Peter Navarro claimed Sunday that Trump was being "tongue in cheek," and an administration official told CNN that Trump was "obviously kidding."

But Trump has questioned Covid-19 testing before, having repeatedly cast doubt on the value of widespread testing both for public health and his own optics over the past few months. He refused to answer a question posed by a local reporter on Monday when asked if he was joking in his Tulsa speech.

There have been over 2.3 million cases of coronavirus and more than 120,000 deaths, according to data from the Johns Hopkins University Center for Systems Science and Engineering.