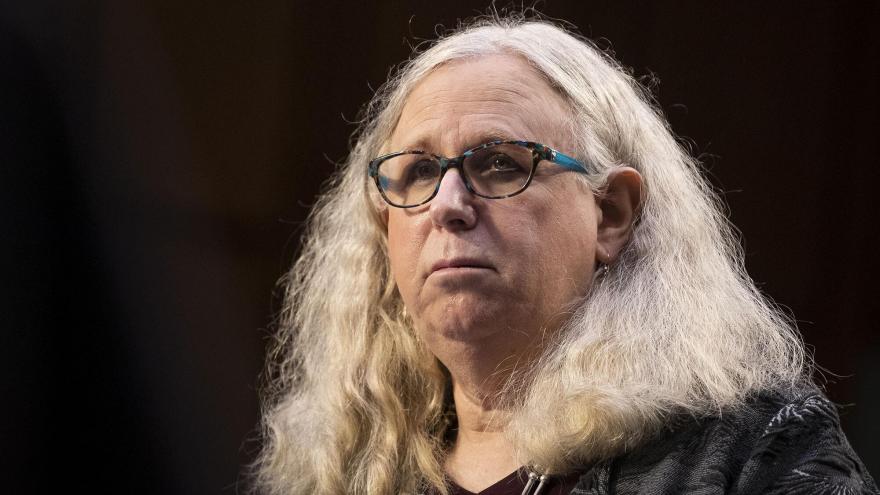 The senate on Wednesday confirmed Dr. Rachel Levine as assistant secretary of health at the Department of Health and Human Services. Levine is the first out transgender federal official to be confirmed by the chamber.

(CNN) -- The Senate on Wednesday confirmed Dr. Rachel Levine as assistant secretary of health at the Department of Health and Human Services, the first out transgender federal official to be confirmed by the chamber.

The vote was 52-48. GOP Sens. Susan Collins of Maine and Lisa Murkowski of Alaska joined all Democrats in voting yes.

Levine, a pediatrician, previously served as Pennsylvania's secretary of health and as physician general — the state's top health official and top doctor.

"The confirmation of Rachel Levine represents another important milestone for the American LGBTQ community," Senate Majority Leader Chuck Schumer said. "As transgender Americans suffer higher rates of abuse, homelessness and depression than almost every other group, it's important to have national figures like Dr. Levine who by virtue of being in the public spotlight will help break down barriers of ignorance and fear."

After her nomination, Levine said she was proud of the work she's done to address the Covid pandemic and opioid epidemic, fight diseases like HIV, prevent diseases through childhood immunization and raise awareness of LGBTQ issues. She graduated from Harvard College and the Tulane University School of Medicine, and completed her training in pediatrics and adolescent medicine at the Mt. Sinai Medical Center in New York City.

Levine's gender identity came up during her nomination hearing when Kentucky Sen. Rand Paul began his questioning by saying, "Genital mutilation has been nearly universally condemned." He then went on to ask, "Dr. Levine, do you believe that minors are capable of making such a life changing decision as changing one's sex?" The question drew criticism from Democrats, who said the Republican senator had misrepresented gender confirmation surgery as genital mutilation.

"Transgender medicine is a very complex and nuanced field with robust research and standards of care that have been developed," Levine responded to the senator's question. "If I am fortunate enough to be confirmed as the assistant secretary of health, I will look forward to working with you and your office and coming to your office and discussing the particulars of the standards of care for transgender medicine."

Most medical professionals disagree with Paul's comparison, including Dr. Jason Rafferty, who authored the American Association of Pediatricians' policy statement on transgender and gender diverse youth health care. The World Health Organization, which the Kentucky senator cited, also distinguishes between the two practices, outlining best practices for the gender-affirming health care in 2017 while opposing all forms of female genital mutilation.