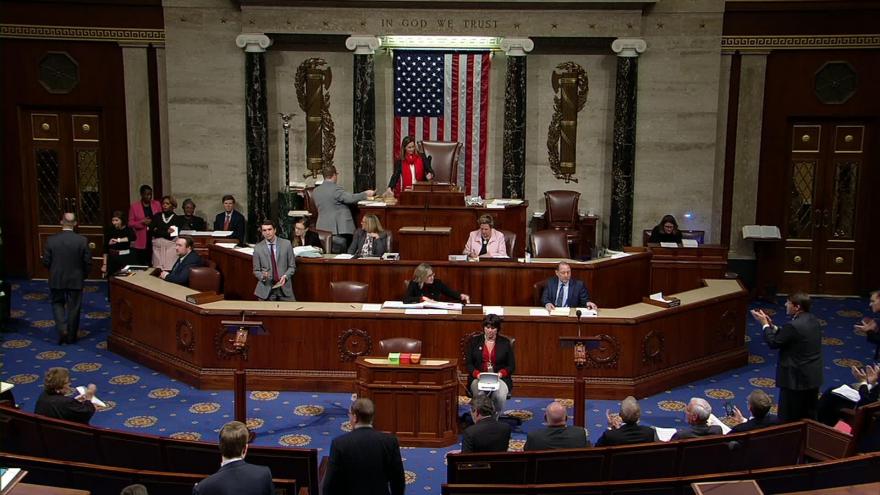 Senators of both parties are expected to come together to pass the Trump administration's foremost legislative priority -- the revised North American Free Trade Agreement -- with the historic impeachment trial of President Donald Trump imminent.

It passed with a vote of 89-10. Sen. Pat Toomey of Pennsylvania was the only Republican who voted against it. Nine Democrats -- Sens. Cory Booker of New Jersey, Kirsten Gillibrand of New York, Kamala Harris of California, Ed Markey of Massachusetts, Jack Reed of Rhode Island, Bernie Sanders of Vermont, Brian Schatz of Hawaii, Chuck Schumer of New York, and Sheldon Whitehouse of Rhode Island-- opposed it. Booker initially voted for the deal before changing his vote to "no" at the end.

The pact was signed by the three countries' leaders in November 2018, but the text was later changed after months of negotiations between the Trump administration and House Democrats. The new version enshrined additional labor protections and got rid of controversial patent protections for biologic drugs.

Final Senate passage of the bill marks the culmination of years of arduous negotiations. Throughout the process, many lawmakers and lobbyists doubted ratification would ever happen, especially in a divided Congress. It will now go to the President's desk to be signed.

During the Senate Finance Committee's hearing on the USMCA implementing legislation, Chairman Chuck Grassley, an Iowa Republican and longtime supporter of the deal who helped shepherd it to ratification, quipped that the effort to pass the agreement had "tested my patience at times."

And House Ways and Means Chairman Richard Neal, a Massachusetts Democrat, said when the deal between House Democrats and the Trump administration was announced that negotiations had often gotten heated, joking that he and US Trade Representative Robert Lighthizer probably set a world record for how many times they had hung up the phone on each other.

Lighthizer attended the Senate vote Thursday -- he could be seen sitting with a number of his staff in the gallery above the Senate floor.

While Trump has argued that NAFTA was "perhaps the worst trade deal ever made," the USMCA enjoys broad support among Senate Republicans, who are now positioned to pass a new version of the deal, including policies embraced by Democrats and backed by the famously trade-skeptical AFL-CIO, the largest labor union in the United States.

The GOP has remained largely behind Trump on the deal, despite new policies Republicans have opposed in the past. Only two Republicans voted against the rebranded US-Mexico-Canada Agreement when it passed the House overwhelmingly in December. Senate Republicans who have questioned some aspects of the agreement, such as its sunset provision, broadly say they will still support it because the deal will bring stability for American workers.

"It is a good agreement. It is not a perfect agreement," Republican Sen. John Cornyn of Texas said during the Finance Committee's hearing on the deal.

Many Democrats also supported the agreement when it came to a vote Thursday, pointing to changes secured by House Democrats.

"There is no question, of course, that this trade agreement is much better than NAFTA," House Speaker Nancy Pelosi, a California Democrat, said when the deal was announced. Supporters on Thursday included Sens. Sherrod Brown and Elizabeth Warren, both staunch labor advocates.

But some, such as Sen. Sheldon Whitehouse of Rhode Island, voted against it. Whitehouse said the environmental protections in the deal are not strong enough.

In the Senate, the parliamentarian required the bill to pass through several committees with an up or down vote before reaching a full vote. The last of those, the Foreign Relations Committee, voted to advance the deal Wednesday.

Leaders in both parties sought a vote on the agreement before the impeachment trial begins, hoping to avoid any procedural and timing complications it will cause.