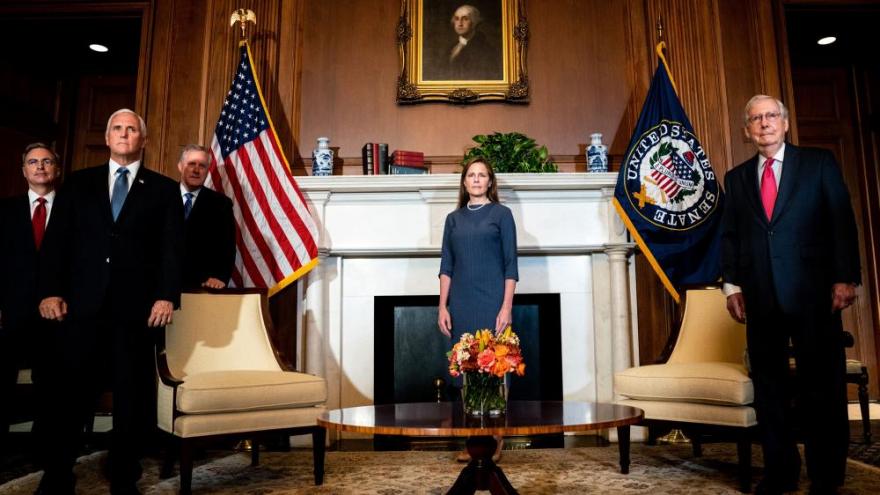 (CNN) -- The Senate advanced Judge Amy Coney Barrett's Supreme Court nomination in a key procedural vote Sunday, paving the way for a final confirmation vote, which will likely take place Monday evening, just a week before the November 3 election where control of Congress and the White House are at stake.

The Sunday vote was held to break a Democratic filibuster of the nomination. Senate Republicans needed only a simple majority to break the filibuster, and the vote was 51 to 48.

Republicans, who hold a majority in the upper chamber, have pushed ahead with one of the quickest nomination proceedings in modern times following the death of the late Justice and liberal icon Ruth Bader Ginsburg last month.

The confirmation battle has played out in a bitterly-divided Senate, but the outcome has not been in question for much of the fight. With few exceptions, Senate Republicans quickly lined up in support of Barrett after her nomination by President Donald Trump, and the judge is on track to be confirmed despite opposition from Democrats.

All Democrats are expected to vote against the nomination. Two Republican senators crossed party lines to vote with Democrats in opposition of Sunday's procedural vote -- Susan Collins of Maine and Lisa Murkowski of Alaska.

Collins, who is facing a competitive reelection fight, has been expected to vote against the nomination due to concerns that it's too close to Election Day to consider a nominee. Murkowski announced on Saturday that she will ultimately vote to confirm Barrett in the final vote, but said that she would vote no on the procedural vote on Sunday. Murkowski has previously voiced opposition to taking up a nominee to fill the open seat so close to the election.

"I believe that the only way to put us back on the path of appropriate consideration of judicial nominees, is to evaluate Judge Barrett as we would want to be judged -- on the merits of her qualifications," Murkowski said on the Senate floor on Saturday. "And we do that when that final question comes before us. And when it does, I will be a yes."

Republicans only need 51 votes to confirm a new justice and currently, there are 53 GOP senators. That means they could lose up to three Republicans and still confirm Barrett with Vice President Mike Pence able to cast a tie-breaking vote in the event of a 50-50 split. That tie vote is not expected to be needed.

Senate Republicans have largely rallied around the nomination, praising Barrett as exceedingly qualified to serve on the Supreme Court. Senate Democrats, in contrast, have decried the confirmation process as a power grab that threatens to undermine Ginsburg's legacy.

In contrast, Democrats have voiced opposition to the nomination, warning that Barrett's confirmation will put health care protections and the future of the Affordable Care Act in jeopardy and have accused Republicans of hypocrisy in moving ahead with the nomination after blocking consideration of former President Barack Obama's Supreme Court nominee Merrick Garland in 2016.

Democrats, who are in the minority, have been limited in their ability to oppose the nomination, but have attempted to protest the process in a variety of ways as it has unfolded.

When the Senate Judiciary Committee voted Thursday to advance the nomination, Democratic senators on the panel boycotted the vote, filling their seats instead with pictures of people who rely upon the Affordable Care Act in an effort to draw attention to an upcoming case on the health care law's constitutionality and their arguments that Barrett's confirmation would put the law at risk.

The stakes in the Supreme Court battle are immense and come at a pivotal time in American politics. Trump's ability to appoint a new justice to the court would mark the third of his tenure in office and create the opportunity to push the court in an even more conservative direction for decades to come.

Barrett's confirmation will give conservatives a 6-3 majority on the Supreme Court, a shift in its makeup that is likely to have dramatic implications for a range of issues that could come before it, including Americans' personal privacy rights, campaign finance regulation, affirmative action in higher education, public aid for religious schools, environmental and labor regulations, the ACA and any potential disputes regarding the 2020 election.

During confirmation hearings, Democrats sought to elicit answers from Barrett on a number of controversial topics the Supreme Court could take up. Barrett repeatedly declined, however, to specify how she might rule on a range of topics, from the Affordable Care Act to Roe v. Wade and the high court's ruling legalizing same-sex marriage.

Barrett explained during the hearings that she shared a philosophy with the late conservative Justice Antonin Scalia, whom she clerked for, but she argued she would not be an identical justice if she is confirmed.