See where shark attacks are happening across the US 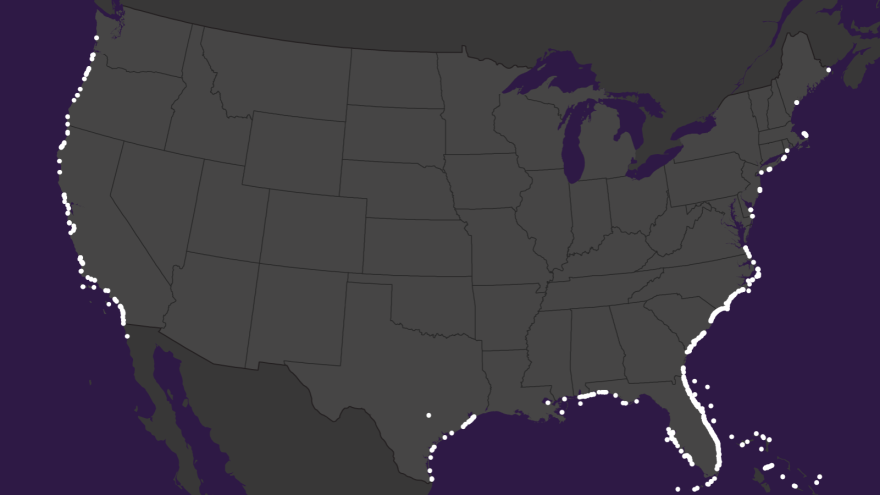 In 2021, there were 28 documented bites in Florida, followed by six in Hawaii, three in California, four in South Carolina, three in North Carolina, two in Georgia and one in Maryland.

(CNN) -- When it comes to shark attacks, Florida typically tops global charts. But recently, New York has been making headlines for a spate of dangerous encounters that have rattled New Yorkers and triggered beach closures.

Before 2022, there were only 12 recorded unprovoked bites in New York's history, including four from the past decade, according to the International Shark Attack File at the Florida Museum of Natural History. But this month, there were five non-fatal shark attacks in Long Island within just two weeks.

While the area is seeing an increase in bites, it does not yet constitute a trend, according to researchers from the International Shark Attack File.

The odds of getting fatally attacked by a shark remain less than 1 in 4 million, according to the International Shark Attack File.

Still, experts say that a combination of conservation efforts and climate change may have something to do with the increase in attacks in New York.

Conservation efforts have brought back the "once overfished" bait fish that sharks feed on, Hueter says.

"When those schools make their way in towards the beach, sharks come with them," he said.

Humans essentially got used to seeing a depleted shark population over the past few decades, Hueter says.

"The sharks have always been there to some extent, but their numbers have been much lower than they are right now because of overfishing over the last 30-40 years," he said. "Through concerted fisheries management effort and fishery efforts, sharks are rebuilt, so numbers are going back up."

Additionally, sharks may be moving north as climate change and rising sea temperatures push their prey north in search of cooler waters. Climate change "plays a role, but is not the biggest driver at the moment" of shark bites, Hueter says.

Sweltering hot temperatures this summer means more people -- and sharks -- at the beach.

"The country is warmer than it's ever been. And that's going to drive more people to the water than ever before, which just simply increases your probability of somebody getting accidentally bit," said Christopher Lowe, director of the Shark Lab at California State University Long Beach.

And beach season for New Yorkers coincides with the time when most shark species head north for cooler water.

"Most of these migratory animals will be approaching, if not at, the northernmost part of their range," Hueter said. "It's also a time when young sharks that were born in the spring or early summer are fairly abundant in coastal waters, in places like New York."

Where are shark attacks happening and are they increasing?

While there has been a steady rise in global shark attacks in the last 30 years, the numbers appear to be leveling off.

Last year, there were 73 confirmed unprovoked shark attack cases worldwide, including 47 in the United States, which has the most documented unprovoked bites in the world, according to the International Shark Attack File.

While the numbers represent an increase from 2020, when fewer people went to the beach amid the pandemic, they are still on par with the most recent five-year average of 72 incidents annually.

And the world is on track for another "very normal shark-bite year," with about 70 to 80 unprovoked attacks expected, according to Gavin Naylor, director of the Florida Program for Shark Research at the Florida Museum of Natural History.

The majority of documented shark attacks in the US happen in Florida.

In 2021, there were 28 documented bites in Florida, followed by six in Hawaii, three in California, four in South Carolina, three in North Carolina, two in Georgia and one in Maryland.

Most of the bites in Florida occur on the state's Atlantic coast. Hueter attributes this to the proximity of the Gulf stream to the shore, significant waves, congestion of surfers and swimmers and the large schools of sharks in the area.

"There are enormous aggregations of animals dashing around the surf at times," Hueter said. "When people are in the water, all pushed up close to shore. That's when bites occur."

By comparison, on Florida's Gulf coast, sharks have lots more territory to "spread out" and there are fewer human-shark encounters, Hueter says.

The West coast has seen nearly 100 attacks in the last 30 years.

Why do sharks attack?

Many attacks are "cases of mistaken identity," occurring under conditions of poor water visibility, according to the Florida Museum of Natural History.

"People are bitten but rarely consumed, and that tells us that we are not on the shark's menu," Lowe said.

Hueter says that many of these bites occur when humans are swimming in or near large schools of prey fish. Small sharks feeding on the schools of fish will "test bite" a person's hand or foot but usually quickly let go.

"Those incidents are truly bites, not attacks where the animal is trying to do mortal harm," Hueter said.

Additionally, sharks may bite because they feel threatened and are just trying to defend themselves.

"If you get in their way, or they're swimming through, because they're moving fast, the defensive reaction on their part is to bite," Hueter said. "Especially something that's bigger than them."

While "shark attack" may summon up images of the massive great white shark from "Jaws," Hueter points out that there are hundreds of species of shark, "all totally different from each other."

"Most of these are relatively small," he said.

In the waters off New York, many previous bites involved juvenile sand tiger sharks. There is a nursery for sand tiger sharks located off Fire Island along the southern shore of Long Island.

"There's reason to believe juveniles are more prone to bite, because they're less experienced and may feel more threatened because they're smaller," Hueter said. "Especially because the bites off Long Island have not been particularly severe, it indicates that it's a smaller animal."

To avoid shark bites, beachgoers should avoid swimming between dusk and dawn, swimming where people are fishing, swimming alone, and swimming around large schools of fish, Hueter says.

Hueter says that as our oceans become healthier, beachgoers may have to adjust to more sharks in the water.

"It's just a matter of education, us adapting to the ocean going back to the way it should be -- becoming wild again," he said.

"The fact is that the ocean we've been enjoying for the last 30 years or so has not been in the healthiest state," Hueter said. "That's what people know -- what they've grown up with, so they think that's the way it should be."

"Go back to the 1950s, 1960s, you find the fishing was better, sharks were better, more birds, everything," he said. "That's what we want to go back to: a healthy, balanced ecosystem."