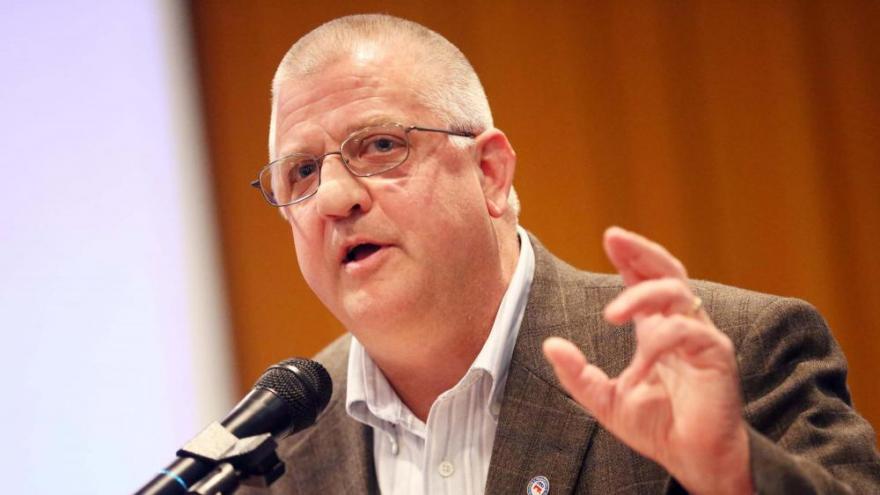 "I don't condone violence nor participate in it," Nearman said in a statement Tuesday. "I do think that when Article IV, Section 14 of the Oregon Constitution says that the legislative proceedings shall be 'open,' it means open, and as anyone who has spent the last nine months staring at a screen doing virtual meetings will tell you, it's not the same thing as being open."

Oregon Speaker of the House Tina Kotek, a Democrat, said Thursday during a news conference that Nearman opened the door to allow protesters into the building before a special session on coronavirus pandemic restrictions.

Nearman said his family has been the target of "criticism, attacks at my home and threats via email social media and phone" since Kotek spoke. He attributed some of those attacks to the timing of the video's release.

"The fact that she was in possession of a video for sixteen days, and only chose to reveal the video and implicate me on the day after an ugly mob descended on the Capitol in Washington, DC, tells me that her motivations are about politics and not about safety," the statement said.

The surveillance video from the morning of December 21 shows a man, allegedly Nearman, opening an interior door and then exiting the Capitol through an exterior door with glass windows. As he walks out, he steps to his right around a man holding a flagpole and keeps walking.

That man keeps the outside door open, then rushes to grab the interior door before it closes. He and another man signal for others to come inside.

About 20 seconds pass before a few people come inside, as police also show up.

The video eventually shows state troopers and Salem police officers drive the protesters back and struggle to hold them at the open doorway for about eight minutes.

Later, two cloudy bursts prompt the officers to retreat from the doorway, the video shows. The protesters then swarm into the building.

Oregon state police said on the day of the protest: "A protester sprayed some kind of chemical irritant (mace /OC / bear spray) into the vestibule."

The Capitol has been closed to the public because of coronavirus restrictions.

Protesters demonstrated outside the building, objecting to Oregon's Covid-19 restrictions in a "Reopen Oregon" rally, as reported by CNN affiliate KATU.

Another video captures the scene from outside. The exterior video shows a few people outside the door when Nearman appears to exit. As he comes out one man turns around and appears to shout for others to come. Nearman walks by him as he is waving and heads down the sidewalk until he disappears off the bottom of the screen.

As protesters moved toward the main chamber, they were confronted by troopers and Salem police in a vestibule, according to state police. The altercation became physical and officers used "inert pepper balls" to keep the group at bay.

After repeated warnings by police to leave the building, two people refused and were taken into custody. Four protesters were arrested by the end of the day. Police soon declared the rally an unlawful assembly.

The legislative session continued uninterrupted, yet lawmakers mentioned hearing chants from outside the building.

Nearman has served since 2015. He was re-elected in November by more than 20 percentage points.

"Representative Nearman's actions were completely unacceptable," Kotek said Thursday. "It's serious, and his behavior was reckless and dangerous."

"The resulting entry was especially terrorizing for our members and staff of color because the rhetoric of the protesters was out of the Trump playbook and is aligned with white supremacy," the House leader added in a statement Friday.

Kotek said Nearman is likely to face discipline in the House, depending on what state police find. She called the OSP probe a "criminal investigation."