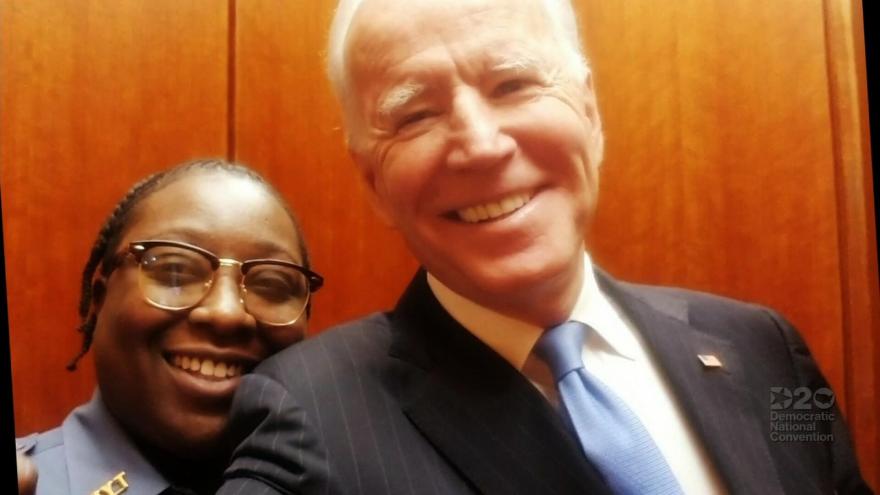 Jacquelyn Brittany, an African American woman who works as a security guard at The New York Times, gave the first speech officially nominating Biden for president at the Democratic National Convention.

(CNN) -- Last year, a security guard said "I love you" to Joe Biden in an elevator and the exchange went viral. On Tuesday night, that same woman gave the first speech officially nominating Biden for president at the Democratic National Convention.

Jacquelyn Brittany, an African American woman who works as a security guard at The New York Times, was escorting the former vice president to a Times editorial board meeting in December when she turned to him and said, "I love you. I do. You're like my favorite." The exchange was aired as part of the Times' TV series "The Weekly," and was circulated on social media.

"I take powerful people up on my elevator all the time," Jacquelyn Brittany said in a video that aired at the Democratic convention on Tuesday night. "When they get off, they go to their important meetings. Me, I just head back to the lobby. But in the short time I spent with Joe Biden, I could tell he really saw me. That he actually cared, that my life meant something to him. And I knew even when he went into his important meeting, he'd take my story in there with him."

"That's because Joe Biden has room in his heart for more than just himself," she continued. "We've been through a lot, and we have tough days ahead. But nominating someone like that to be in the White House is a good place to start. That's why I nominate my friend Joe Biden as the next president of the United States."

Biden did not win the endorsement of The New York Times' editorial board, but in January he and his campaign touted his warm exchange with Jacquelyn Brittany as the real prize.

"Honored to have won Jacquelyn's endorsement," Biden tweeted with the video.

TJ Ducklo, Biden's national press secretary, later tweeted that Biden had said the following at a campaign stop in Waukee, Iowa: "I didn't get the endorsement -- but that's OK -- I got something better. I got to meet Jacquelyn, an elevator operator."

"Jacquelyn said the nicest things to me and told me she was supporting me. And I left there thinking -- this is why I do this. This is why I'm in public service. To care about people," Ducklo said Biden said.

The Washington Post was first to report on Jacquelyn Brittany's involvement at the convention. Brittany is her middle name, and she declined to the Post to have her last name printed.

Jacquelyn Brittany told the Post, "Once (Biden) came in, he was just genuinely, genuinely nice to people. We don't get that from everybody." She said, "I kept thinking to myself, this was a person I want to lead the country."