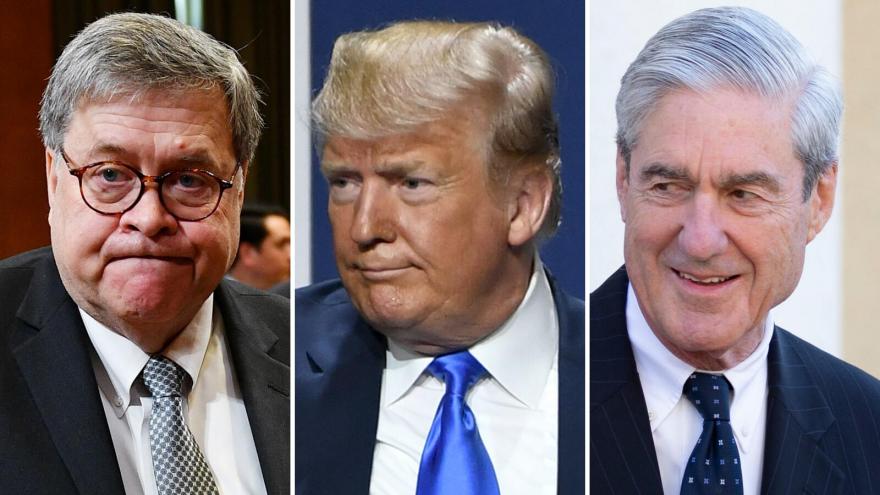 A federal judge this week rejected the Justice Department's attempts to keep secret a departmental opinion to not charge former President Donald Trump with obstruction at the end of the Mueller investigation, calling the administration's lawyers "disingenuous." The department had argued in court that the largely redacted March 2019 memo was legal reasoning that helped then-Attorney General William Barr make a decision about Trump.

(CNN) -- A federal judge this week rejected the Justice Department's attempts to keep secret a departmental opinion to not charge former President Donald Trump with obstruction at the end of the Mueller investigation, calling the administration's lawyers "disingenuous."

The department had argued in court that the largely redacted March 2019 memo was legal reasoning that helped then-Attorney General William Barr make a decision about Trump. But federal Judge Amy Berman Jackson said she believed Barr and his advisers had already decided they wouldn't charge the President with a crime before he got the written advice, and the memo was partly strategic planning instead of legal reasoning -- and therefore could be made public.

The decision adds to the criticism federal judges and others have had about Barr and his handling of the end of the Mueller investigation. Jackson and others have repeatedly questioned Barr's motives to keep documents related to the investigation -- including Mueller's findings and Barr's reactions to them -- secret or by delaying their release.

"The agency's redactions and incomplete explanations obfuscate the true purpose of the memorandum, and the excised portions belie the notion that it fell to the Attorney General to make a prosecution decision or that any such decision was on the table at any time," Jackson wrote in a 35-page opinion released Tuesday.

"The fact that [Trump] would not be prosecuted was a given," she added.

The judge's opinion comes in a lawsuit where the government transparency group Citizens for Responsibility and Ethics in Washington is seeking access to DOJ documents through the Freedom of Information Act.

CREW and several other groups are still trying to pry new records from the Mueller investigation into the public's eye, through lawsuits and other challenges. The case Jackson decided this week deals with documents around Barr's decision to decline to charge Trump.

The memo of supposed legal reasoning prepared for Barr should be released, Jackson ruled. A draft legal analysis from the Office of Legal Counsel would stay secret, Jackson also decided.

"We requested these records and filed this lawsuit due to serious doubts about the official story coming out of Barr's DOJ. While we do not yet know what is in the memo, the Court's opinion gives us confidence that we were right to have questions," Jordan Libowitz, a spokesman for CREW, said on Tuesday.

The 9-page memo that Jackson said should be released was finalized by two top political leaders in the Justice Department -- Steven Engel of the Office of Legal Counsel and Ed O'Callaghan, a top adviser in the Deputy Attorney General's Office -- the same day Barr briefed Congress about Mueller's findings on Russian interference in the 2016 election and Trump's attempts to obstruct justice.

The Justice Department had argued in court that much of the substance of Engel and O'Callaghan's memo should stay blacked out, because it was protected internal discussions about the law and policy. One DOJ lawyer, Paul Colborn, had told the court the memo was meant to help Barr decide whether to prosecute Trump.

Jackson has read the document at issue in the case for herself, she noted. The judge said the redacted pages offer "strategic, as opposed to legal advice" to Barr. By not mentioning that in court, Jackson wrote that the DOJ was pretending the strategy discussion didn't exist.

The way the Justice Department has handled the dispute over public access to the document "served to obscure the true purpose of the memorandum," Jackson added.

Not worthy of credence, Jackson says

Jackson's strongly worded opinion, though largely about technicalities around government confidentiality, comes close to accusing the Justice Department of a cover-up.

The judge wrote that while top DOJ officials prepared the legal opinion that gave Barr cover not to prosecute Trump, they simultaneously were emailing about a higher priority they had: to inform Congress the President was exonerated.

The Mueller probe thoroughly investigated several episodes where Trump tried to impede or end the inquiry into his campaign's ties to Russia. But the special counsel left the indictment decision to Barr and his top political appointees. Mueller partly found that Justice Department policy blocked the prosecution of a sitting President. After closing his office, Mueller later told to Congress that an ex-President could be prosecuted for obstruction, yet Barr had already reached a definitive conclusion in Trump's case.

Jackson reviewed closely how that decision came about, looking at court statements from department lawyers and internal emails between Barr's top advisers.

Justice Department officials' "affidavits [in court about the memo] are so inconsistent with evidence in the record, they are not worthy of credence," Jackson wrote.

Another federal judge previously slammed Barr in another public records case following the Mueller investigation, saying the attorney general had a "lack of candor" that was helpful to Trump politically when the then-attorney general told Congress and announced to the public what Mueller had found, without releasing Mueller's nearly 500-page report.