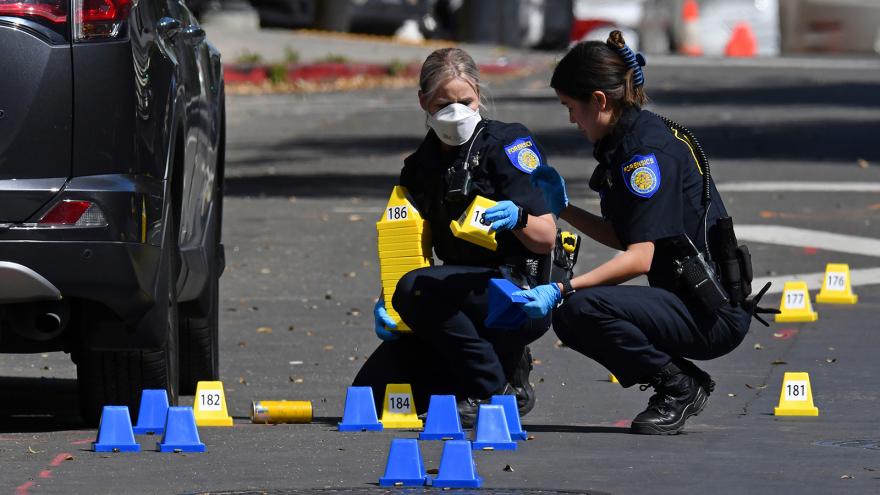 Police in Sacramento, California, have arrested a second suspect in connection to a mass shooting this weekend that left six people dead.

The individual was found at the scene of the shooting early Sunday with "serious injuries from gunfire" and taken to a local hospital, the Sacramento Police Department said in a news release.

The suspect was "quickly identified as a person of interest and has remained under the supervision of an officer at the hospital while his treatment continues," the release said.

One man has been arrested in connection with a shooting in downtown Sacramento, California, that left six people dead and a chaotic crime scene littered with more than 100 shell casings.

Dandrae Martin, who was identified as a "related suspect," is scheduled to appear in court Tuesday after being booked on assault and illegal firearm possession charges, according to police.

Sacramento County District Attorney Anne Marie Schubert noted in a statement posted online that Martin, 26, has not been charged with a homicide. She said she thinks authorities will eventually take more people into custody.

The deadly incident, which also left 12 people wounded early Sunday, is one of more than 120 mass shootings in the United States this year and one of at least 10 shooting incidents over the weekend.

"The investigation is highly complex involving many witnesses, videos of numerous types and significant physical evidence," Schubert said. "This is an ongoing investigation and we anticipate more arrests in this case."

Martin was being held without bail, online jail records show. CNN has not been able to reach an attorney for him.

During an emotional vigil Monday night, members of the Sacramento community and officials expressed frustration with repeated instances of gun violence in the city and called for action to prevent more shootings.

"The last time we had a mass shooting we did the same thing," said one speaker who did not share his name but identified himself as a cousin of one of the victims. "Sat out here, held up our candles, talk about the police are here for us now, the public officials are here for us now."

"How are they here for us when we are sitting doing the same damn thing again? The same thing," he said. "So who's going to stop it?"

Here's what we know about the shooting so far.

The shooting happened just after 2 a.m. in a bustling part of downtown, just a few blocks from the California State Capitol, Sacramento City Hall and the Golden 1 Center, where the city's NBA team plays home games.

A video posted on social media appears to show an altercation before the shooting, police said in a statement. "We are currently working to determine what, if any, relation these events have to the shooting," the statement said.

During the initial investigation, detectives found more than 100 shell casings and discovered at least three buildings and three cars that had been hit by bullets.

"There were a lot of shots fired that night, and hence the complexity of the investigation," police Chief Katherine Lester told CNN affiliate KCRA.

Lester has said there were multiple shooters and that a large fight preceded the gunfire. A stolen handgun was among the hundreds of pieces of evidence found at the scene, she said Sunday.

Police served search warrants at three homes and at least one handgun was recovered, Sacramento police said in a news release. Authorities said they have received more than 100 video or photo files on a tip portal.

Victims as young as 21

The Sacramento County Coroner's Office on Monday identified the six victims who died:

The tragedy has devastated the victims' families, confounded the community and angered those who are frustrated by yet another mass shooting.

"My son was a very vivacious young man," Harris' mother Pamela Harris told CNN affiliate KOVR. She said her son smiled all the time and never bothered anyone.

"And for this to happen, it's crazy," she said. "And I'm just to the point right now (where) I don't know what to do. I don't even think this is real."

The incident was the second mass shooting in Sacramento in the past five weeks. On February 28, a man fatally shot three of his children and another man at a church. The gunman took his own life, authorities said.

Mayor Darrell Steinberg said solutions -- not well wishes -- are needed to help change the trajectory of gun violence in America.

Sacramento will keep investing in programs focused on early intervention and violence prevention for young people, he said.

Gov. Gavin Newsom issued a statement saying the "scourge of gun violence continues to be a crisis in our country, and we must resolve to bring an end to this carnage."

And President Joe Biden described Sacramento as "another community devastated by gun violence," calling on Congress to act on gun control measures.

"In a single act in Sacramento, six individuals left dead and at least a dozen more injured," Biden said in a statement. "Families forever changed. Survivors left to heal wounds both visible and invisible."