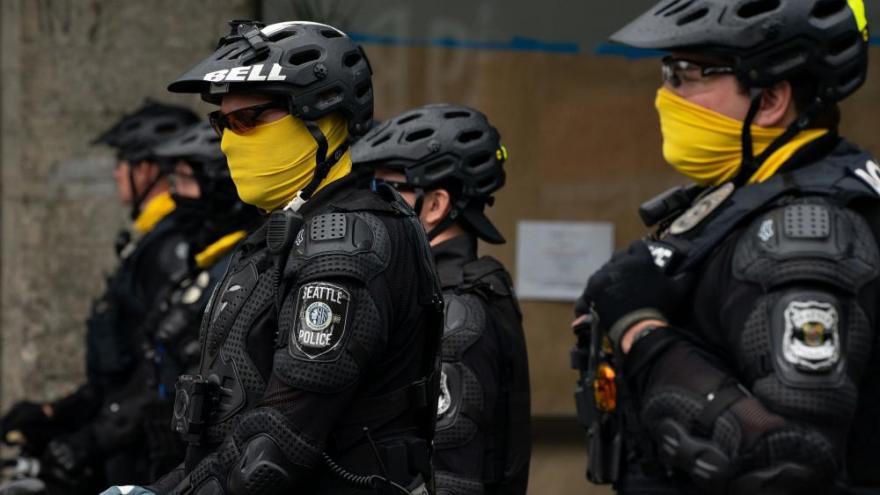 Seattle Mayor Jenny Durkan plans to sign a new city budget that includes an 18% cut to the city's police department funding, according to a statement issued by her office.

(CNN) -- Seattle Mayor Jenny Durkan plans to sign a new city budget that includes an 18% cut to the city's police department funding, according to a statement issued by her office Tuesday.

A vote by the Seattle City Council approved the budget Monday 8-1, with Councilmember Kshama Sawant voting against. She had pushed for the full 50% cut to the police budget that protesters had demanded over the summer following the death of George Floyd in Minneapolis.

The budget comes after months of clashes between police and demonstrators that included the takeover of a precinct in the city's Capitol Hill neighborhood. Since then, scores of officers have resigned, and the former chief of the department retired amid proposals to defund the Seattle Police Department.

"I applaud the City Council for taking a more deliberate and measured approach to the 2021 Seattle Police Department budget than occurred this summer which led to the resignation of former SPD Chief Carmen Best," Durkan said in a written statement issued by her office.

What led up to the budget cut

In June, demonstrations in the Capitol Hill neighborhood, on the east side of the city, grew to include the takeover of the East Police Precinct, creating the Capitol Hill Organized Protest Area or CHOP, which became inaccessible by vehicle, limiting emergency responses to the area.

Various incidents, including the fatal shooting of a man and a female protester being run over, took place in the area before police dispersed the occupation after several weeks.

Carmen Best, Seattle's police chief at the time, denied claims that her department told officers not to respond to 911 calls in the area.

Following criticism of the department's handling of the unrest in the city and a proposal to defund SPD by 50%, Best retired in August.

In September, a total of thirty-nine officers quit or retired from the department, CNN affiliate KIRO reported. Over 100 have left this year, higher than in any year since at least 2012, the department told the affiliate.

"We are losing an unprecedented number of officers, which makes it even more critical that we recruit and retain officers committed to reform and community policing that reflect the diversity and values of our city," Mayor Jenny Durkan said in a statement to KIRO.

The mayor said the latest budget was the result of her consultation with former Chief Best and Interim Chief Adrian Diaz regarding the policing needs of the city.

"I proposed thoughtful reductions to the Seattle Police Department that coincide with increased and continued investments in alternatives to sworn officer responses including expanding Health One and continuing to invest in mental health professionals and Community Service Officers," the mayor explained in her statement.

"I have outlined my vision and plan to make budget decisions based on informed assessments of what services we need from the Seattle Police Department and how we can scale up alternatives to policing," Durkan said. "As the City Council now recognizes, this required a thoughtful and deliberate approach and could not be done by simply cutting to any particular number or percentage."

More than half of the cuts to the police budget came in the form of moving some divisions out of the department and put under civilian control, including victims' advocates, parking enforcement and the 911 system. Money is set aside for recruiting new officers to replace those who are retiring and leaving the department, but the overall size of the force will not increase.

Durkan had previously signed an executive order to "create an accountable and transparent timeline to evaluate Seattle Police Department (SPD) functions" and identify areas that could be transitioned from SPD response to civilian and community-based responses, a release from her office issued in October said.

In addition to the changes to police funding, the city is pledging $100 million for projects to benefit communities of color.

"I believe we are laying the groundwork to make systemic and lasting changes to policing," Durkan said. "We have rightly put forward a plan that seeks to ensure SPD has enough officers to meet 911 response and investigative needs throughout the city, while acknowledging and addressing the disproportionate impacts policing has had on communities of color, particularly Black communities."