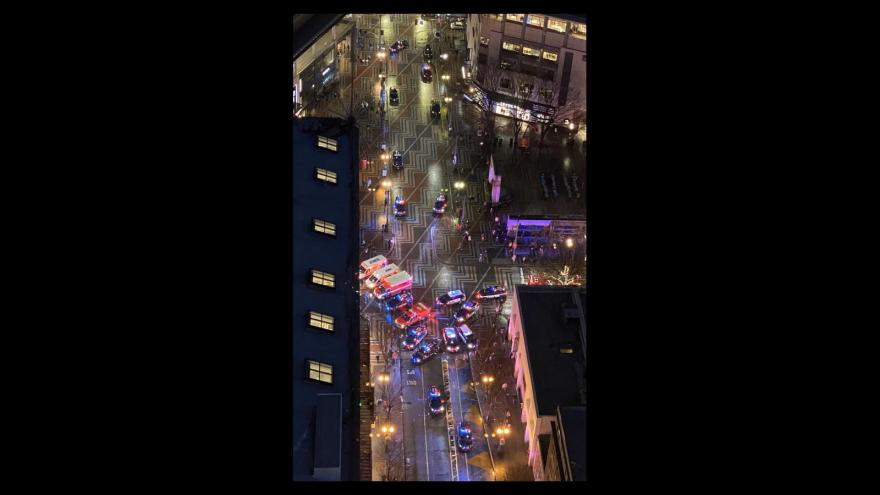 Authorities are searching for a gunman after one person was killed and several others were injured in a shooting in downtown Seattle, police and fire officials said.

(CNN) -- One suspect has been arrested in downtown Seattle's deadly shooting, and police are looking for two, the mayor said Thursday.

"Both men are considered armed and dangerous," the police department said. Police said they arrested 21-year-old Jamel Jackson on a firearms violation.

One person died and seven were injured in the shooting reported Wednesday afternoon near Fourth Avenue and Pine Street, near Westlake Park, police tweeted.

"SPD has arrested and booked one of the shooters," Mayor Jenny Durkan said at a press conference. "The other two shooters were also known to SPD, and have extensive criminal histories and gang connections."

The suspect arrested Thursday was one of the seven people taken to the hospital with gunshot wounds, Police Chief Carmen Best said. He was seen on surveillance video with a gun in his hand, Best said.

The person who died in the shooting has not been publicly identified.

Amazon employees injured in the shooting

Of those wounded, two remain hospitalized at Harborview Medical Center and one was released.

A 32-year-old man was in satisfactory condition and a 55-year-old woman is in serious condition, Gregg said.

Two of the injured were Amazon employees, the company confirmed to CNN.

"Two of our employees were injured and both are recovering," the company said in a statement.

Authorities ask anyone with information -- especially anyone with photo or video evidence of the shooting -- to contact police or upload any digital evidence through an online portal.

Christina Cuthbertson, who lives nearby, told CNN she heard gunshots and people running away.

"Then, minutes later, you see tons of cop cars coming," Cuthbertson said. "We are told to not leave the building right now."

Seattle Police are beefing up their presence downtown -- including a mobile precinct -- to respond to 24 hours of gun violence in the city, Durkan said. Three separate shootings took place within blocks of each other, culminating in the shootout Wednesday night.

A 55-year-old man died in a shooting near the same intersection Tuesday, CNN affiliate KCPQ reported.

Best told reporters no information connects the shootings at this point.

Washington Gov. Jay Inslee expressed his condolences Wednesday night, tweeting "I am sick for those impacted by the gun violence in Seattle tonight."

Durkan said the shootings are a sign that more needs to be done to stop gun violence.

"If this had been a fistfight, eight people would not have ended up in the hospital," Durkan said. "We have got to stop the flow of guns into criminals' hands."

Although the city is increasing resources downtown, Chief Best said Wednesday's shooting "is not related to a staffing issue in the Seattle Police Department."