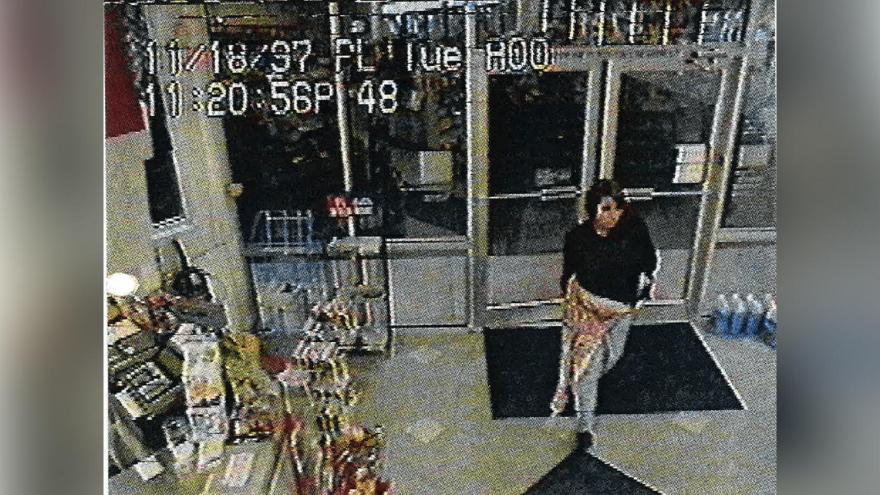 Nearly 23 years ago, a newborn baby was found dead in a trash can at a gas station in Seattle. Decades later, police have arrested a suspect in the case who they say is the baby's mother. Police had been trying to identify the woman seen on a gas station's surveillance video.

(CNN) -- Nearly 23 years ago, a newborn baby was found dead in a trash can at a gas station in Seattle. Decades later, police have arrested a suspect in the case who they say is the baby's mother.

Christine Marie Warren, 50, was arrested Thursday after investigators used information from a public genealogy website that linked Warren to the child via DNA, the Seattle Police Department said in a news release.

Warren was arrested on suspicion of homicide and is being held on $10,000 bail, according to jail records and the King County Prosecutor's Office. She is believed to be the baby's mother, police said.

Warren made an initial court appearance Friday, prosecutor's office spokesman Casey McNerthney said in a news release. A judge found probable cause of second-degree murder, but McNerthney said he anticipated a decision on filing a formal charge would be made by Monday.

According to a court document, Warren told police detectives that she gave birth in the convenience store bathroom in 1997 and abandoned the child in a trash can. She remains in the King County jail as of Saturday evening, according to jail records.

Documents in the case do not list an attorney for Warren. CNN has attempted to reach out to Warren directly but has not heard back.

The case dates to November 20, 1997, when a newborn boy was found in a restroom trash can at a gas station in Seattle's Maple Leaf neighborhood. An autopsy confirmed the baby was born "alive and full term," the court document said.

Police released surveillance camera footage of the suspect taken on November 18, 1997, but no one was ever identified. Investigators obtained DNA evidence from the scene but were unable to find a match in the Washington State Patrol Crime Laboratory's database.

In 2018, detectives began reinvestigating the case, according to the news release. Detectives obtained "information from a public genealogy website" that helped them locate a woman who was a possible DNA match and who they say fit the description of the woman seen on the gas station's surveillance footage.

"Investigators conducted an undercover operation and obtained the woman's DNA, which was a match for a sample in the state's crime lab database," according to the news release.

After interviewing Warren, police arrested her on Thursday. Police did not release the name of the website that helped them find the suspect.

The baby was buried under the name "Baby Boy Doe" at a cemetery in Seattle. Dozens of people donated enough money to fund the baby's funeral, and his headstone is carved with the words "We Care," CNN affiliate KIRO reported.